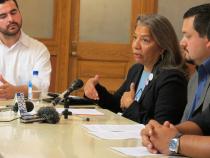 The report was generated by the voter registration group, One Arizona. According to their analysis of election and census data, Latinos will make up about 14 percent or more of all votes cast this year. That’s up from 12 percent in 2010 and 9 percent in 2006.

Petra Falcon is the executive director of the group Promise Arizona. She said prior to the passage of anti-illegal immigration measures like SB 1070, voting rates among Latinos had been flat, but there’s been an increase since then.

"It’s about understanding that whoever gets elected on election day is going to be making decisions for their families and that’s what is continuing to motivate," Falcon said.

Falcon and Loredo both said that outreach and voter registration efforts have also played a role in the growth.