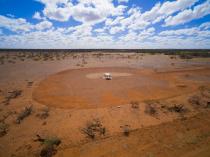 (Photo courtesy of the Commonwealth Scientific and Industrial Research Organisation)
Photograph of the EDGES experiment showing the antenna used to verify the original measurements. The large wire mesh panel on the ground acts as a mirror for radio waves to ensure the antenna only receives signals from the sky.

The story of the universe as we know it and the planet we live on begins with the first star. In 2016, the Hubble Telescope measured the oldest known galaxy in the universe — one that formed 400 million years after the Big Bang.

A group of astronomers has sliced that record in half with new findings that suggest the oldest stars formed 180 million years after the Big Bang. The study is a collaboration between ASU and MIT and was published this week in the journal Nature.

Dr. Judd Bowman is an astrophysicist at ASU who co-authored the study.

And he sort of knows how to travel back in time.

“Every telescope is a time machine, so the farther away we look, the farther back in time we see,” Bowman said.

It’s not like a TARDIS or a flying DeLorean, but Bowman works with technology that picks up traces of the distant past — signals in the sky leftover from the universe’s earliest moments. Think about it as the first stars sending a letter to a pen pal that didn’t exist yet. But the letter isn’t so easy to read.

“Our own Milky Way galaxy is just a booming source of radio waves. We’re living in the middle of like a giant, bright light here on Earth,” Bowman said. “And so we’ve been spending years trying to develop the techniques to build instruments that don’t accidentally convert all of our own Milky Way’s radio emission into this sort of cosmological signal we’re trying to see.”

Once they created the antenna, they had to put it far away from man-made radio that would also interfere with the message. The perfect spot was Western Australia, 150 miles from any radio transmitters. The antenna looks like a shiny table standing on the red-orange dirt of the outback.

“It’s a really pristine environment for doing radio observations,” Bowman said. “And that’s critical to us because the signal that we’re finding — this cosmological signal — happens to overlap a bit with the FM radio band.”

That’s the one you’re hearing my voice on, if you’re listening to this on 91.5 FM.

And the static you hear between stations is radio waves picked up from everywhere — Earth, our galaxy, even the afterglow of the Big Bang.

And the signal Bowman wanted to find is buried somewhere in there too.

“It’s about .01 percent of the total radio power we’re receiving in those wavelengths,” he said.

Finally, without all that noise messing with the data, Bowman and the team could tune into the cosmic timeline.

“So, in a spectrum, it looks like a little U-shaped dip,” Bowman said.

You can’t actually hear the signal, but one of the study’s co-authors, Raul Monsalve, created an audio interpretation of the dip, where a tone dips down and comes back up. Think of this dip as a footprint that a star left behind about 13.6 billion years ago.

“And one of the exciting things actually that we’re reporting is that this signal is twice as big as expected,” Bowman said.

Which left the astronomers scratching their heads. They found the footprint they were looking for, but it didn’t belong to the animal they expected, so to speak.

This has quickly led to different theories, including one about dark matter, which is as mysterious as it sounds. Physicists don’t know too much about it yet, and this tiny signal could be the beginning of a new body of research; after the signal is independently verified, of course.

“We want other scientists to look at it critically and maybe find anything we might have overlooked, any possible mistakes,” Bowman said. “But if everything continues to hold up, then the potential for some really exciting science might be buried in here, too.”

As if hearing from the first stars known to man wasn’t exciting enough.