Take a look through your junk drawer — for some, a collection of, well, junk. But for others, it’s a treasure chest filled with potential. This is the idea that drives the Barter Boat.

“Everything at the Barter Boat is something that has been traded by another person or bartered, putting the barter in barter boat,” said artist Anna Abhau Elliot. She’s one-third of Radar Art, the group that created the project two years ago.

The wooden facade could have been pulled from a carnival lineup. It’s painted blue and white and covered with twinkly lights. An artist sits in each window, ready to greet anyone who walks up.

“Hey got something to trade?” 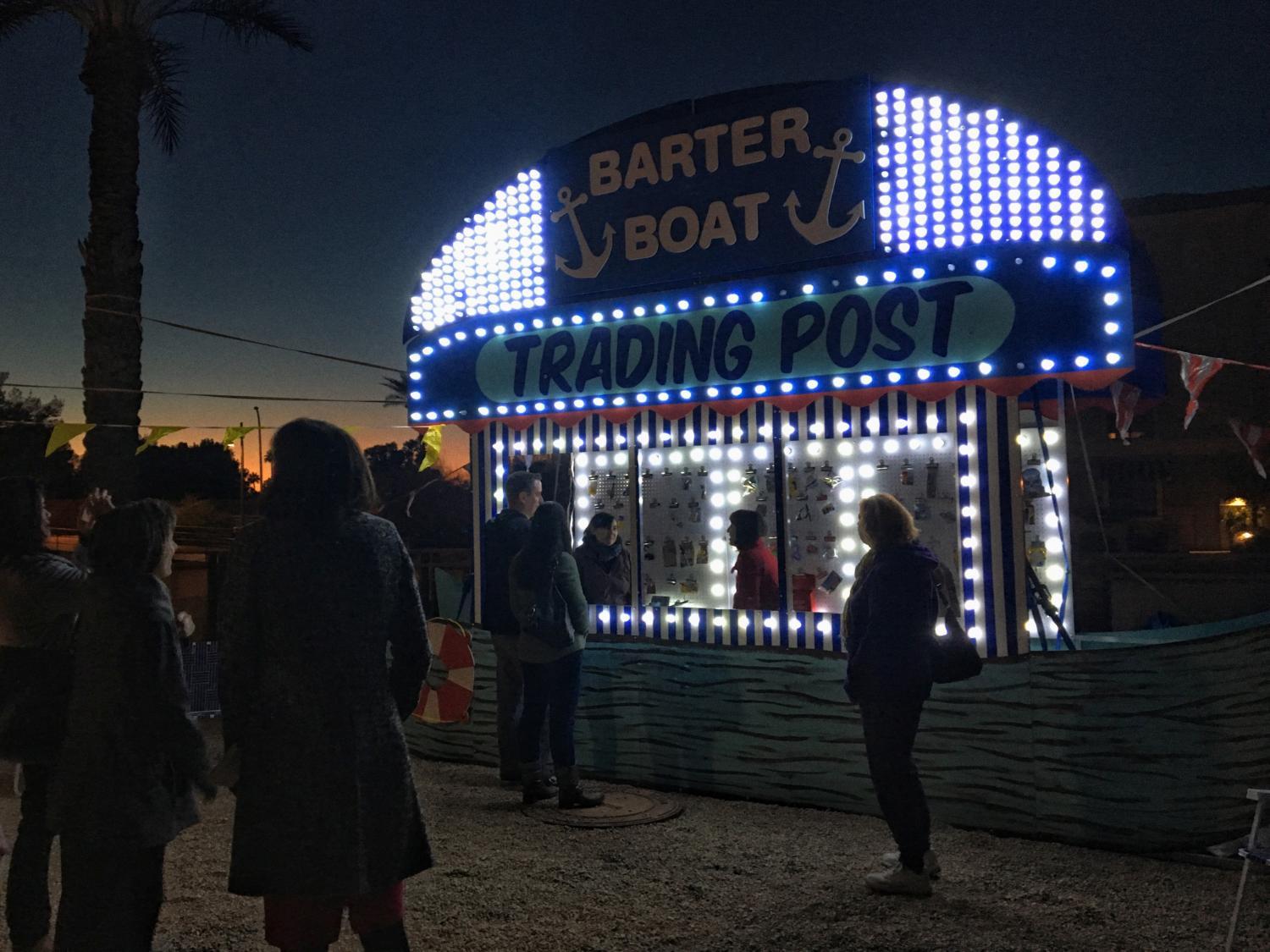 (Photo by Mariana Dale - KJZZ)
“Everything at the Barter Boat is something that has been traded by another person or bartered, putting the barter in barter boat,” Elliot said and each packet of objects is made by hand.

They take anything that’s not food or actual trash. Elliot said the only thing they’ve ever rejected is a dirty tissue. In exchange, you get a piece of art that fits in the palm of your hand.

Sylvia Frost walked up to the boat during the first weekend of Scottsdale’s Canal Convergence, an art festival on the waterfront.

She didn’t have much in her pockets, but fished out two ballpoint pens, one purple and one triangle-shaped with the words “Ask A Librarian” on the side.

“They never roll off the table. These things are brilliant,” Frost said. “This should be worth much over here.”

“For that pen I could do this clipping of a bird and two random pieces of jewelry that might look great together actually. We don’t know,” Moore said.

There’s another package with a lobster toothpick, a Lego and a piece of thread.

In the end, Frost settles on a vintage postcard of Washington Cathedral. In their travels, the Barter Boat also acquired a sizable collection of unused vintage postcards they will mail for you.

”I made out like a bandit,” Frost said smiling. She sketches a photo of the Barter Boat on the card to send to a friend. 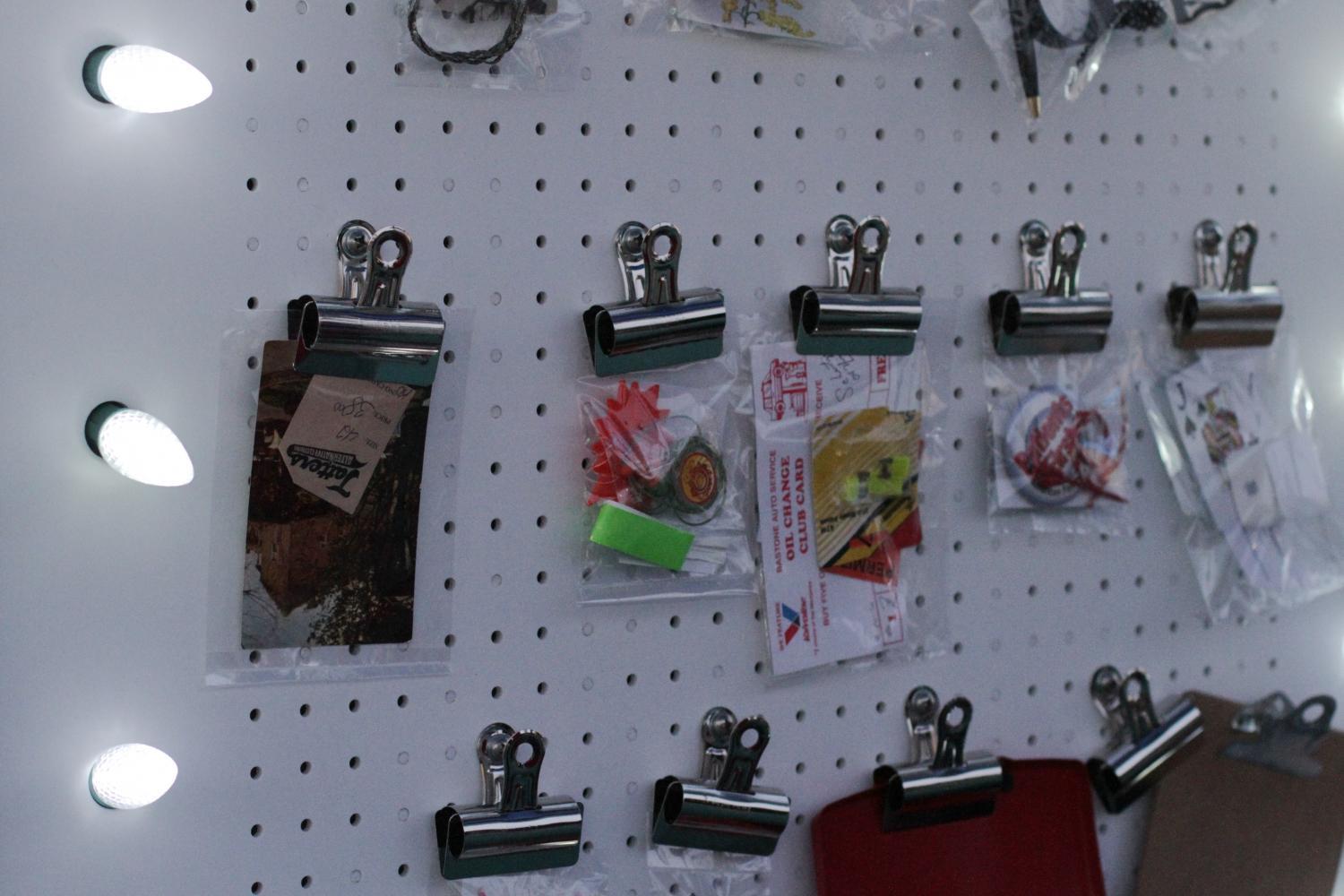 (Photo by Mariana Dale - KJZZ)
Elliot says when someone brings them an object, they try to choose an assemblage that reflects the trade or the person.

“We made popsicles for a while but no matter how much we told the public that they weren’t food nobody listened,” Elliot said.

Now they encase objects in clear biodegradable bags — much more stable and less tempting to taste.

“We can give importance to tiny things that often get forgotten.”

Elliot spread out dozens of small plastic toys, coins, and various knick-knacks on a folding table. Each was collected from people at a stop in the six cities they’ve visited.

“What you have in your pocket might seem kind of normal to you, but might be interesting or surprising or informative to somebody in a different space,” Elliot said.

Elliot made more than 500 little assemblages, as she calls them, before this stop in Scottsdale.

“I find myself being a perfectionist and then remembering this is a pretty imperfect thing to do in the first place,” Elliot said.

Each weekend at Canal Convergence they’re offering people the chance to make their own assemblages to either keep or donate to the Barter Boat.

Brittany Arnold brought a few costume jewelry rings and chose one with a black oval-shaped stone to start her creation.

“I’m putting in a spoon and some oval shaped shells and this cool picture that has a thought bubble that’s oval shaped,” Arnold said. “I didn’t realize it, but let’s just the say the symbolic purpose is that I just got engaged, and I have an oval-shaped ring.” 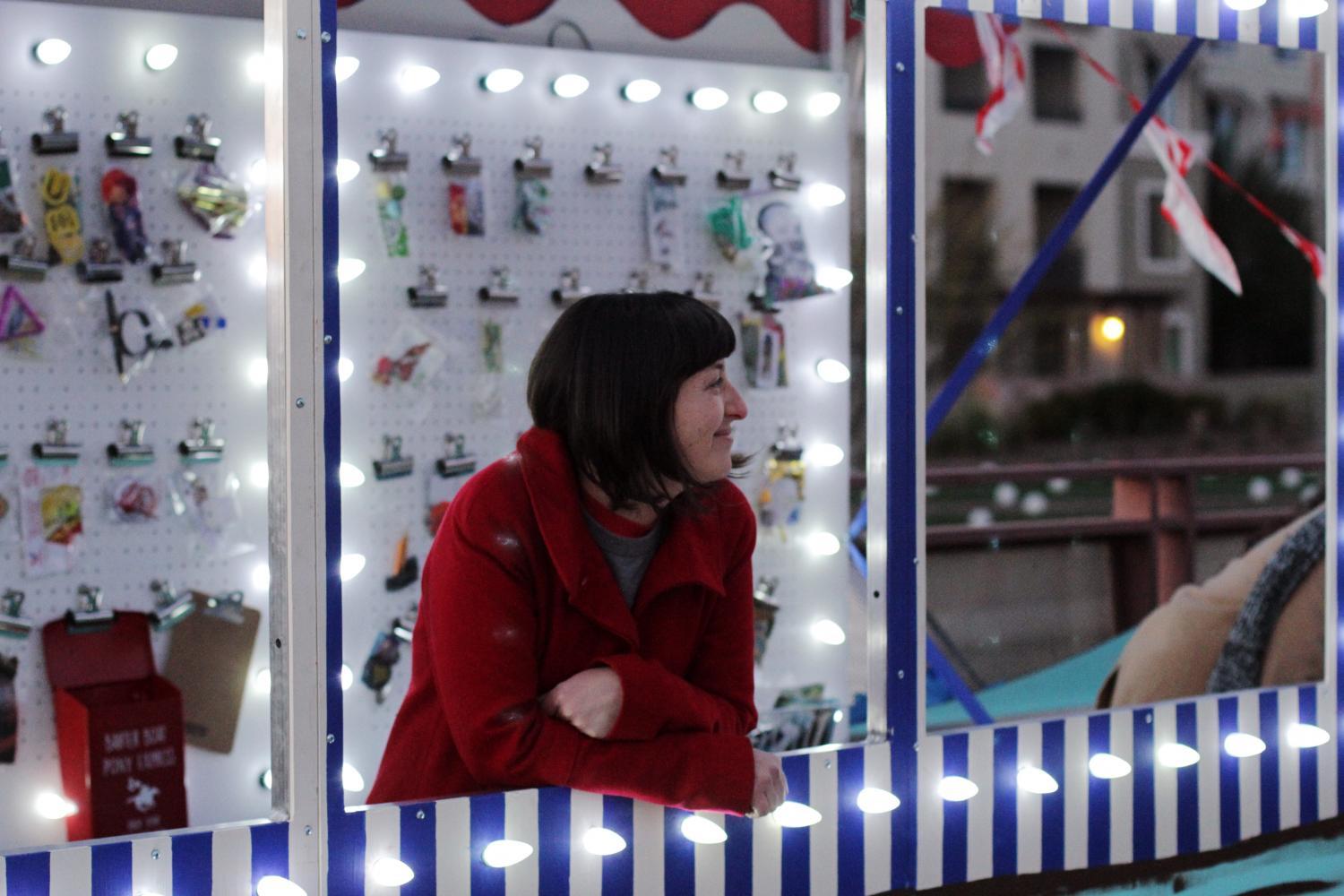 (Photo by Mariana Dale - KJZZ)
"Do you have anything to trade?" is the first question Robin Schwartzman asks when someone approaches the Barter Boat. If not, a joke, a story or a talent could suffice.

Elliot said Barter Boat was meant to be inclusive and open to anyone of any age to participate.

“Whoever makes a thing or whoever contributes a thing is our collaborator,” Elliot said. “You don’t have to have an MFA to be a part of the Barter Boat.”

That’s one of the aspects that made it attractive to the organizers of Canal Convergence, which celebrates public art.

The festival also wanted to spotlight a project that incorporated the idea of reuse.

“Public art is not just about a sculpture or a mural it’s about the practice of seeing the beautiful in a lot of things.” 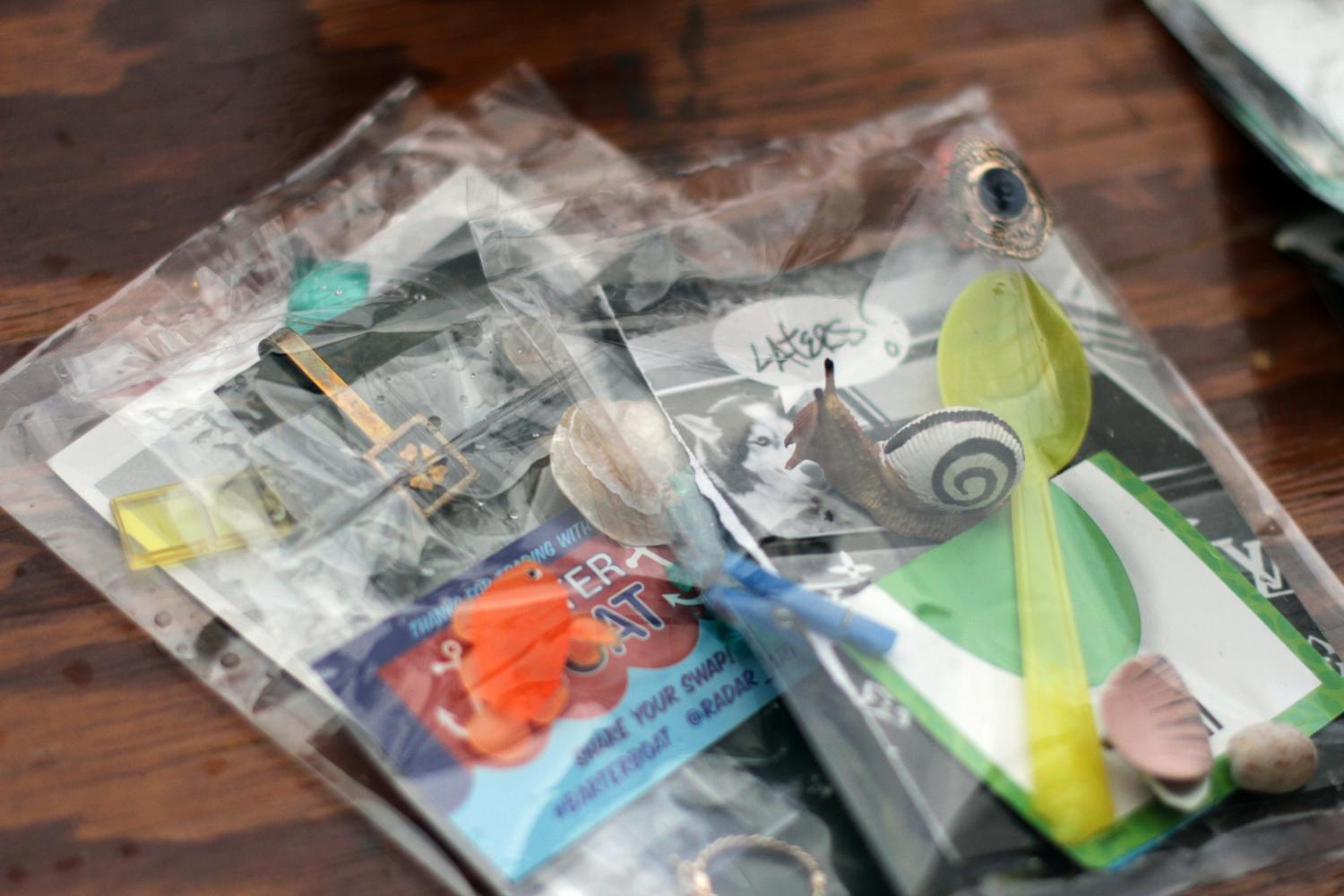 (Photo by Mariana Dale - KJZZ)
Each assemblage or artifact combines objects traded by people in the towns the project visits. Some people have even mailed contributions to the artists.

If you don’t have an object to trade at the Barter Boat, that’s OK too.

Savannah Hill, 12, is a black belt in martial arts and offers a kick sequence that she’s practiced in Taekwondo for a year.

Her mom gave her a warning before she started — don’t take out any small children.

Hill spun and kicked across the concrete. For a moment, both feet lift of the ground and she’s floating. When she lands, there’s applause.

She swaps her performance for an assemblage that features a stuffed green Geico insurance gecko.

Whether someone opens their packages varies from person to person. Some are just nice to look at.

“I’ll just put mine in a drawer and remember fondly the Barter Boat,” said Rebecca Bish. Her souvenir has a picture of Jackie Kennedy and what appears to be a Christmas bauble.

Diane Hanneman approached with a box full of Polaroids from the 1980s and old slides.

“I went into my unrelated ephemera box and pulled out some things to bring and trade,” Hanneman said.

They belonged to an acquaintance of hers who passed away. It’s apparent from the images that she worked with textiles and he loved trains.

“I like the idea of bits that are in our lives and constantly present and thought of as unimportant but sometimes in retrospect very informative to the time they came from,” Hanneman said.

In exchange, she’s taking away an old postcard with faded writing and a one cent stamp. She’s happy her contributions will live on.

“I would hope I guess that instead of just being discarded that maybe they’re savored for a moment before being left of put down.”

EDITOR'S NOTE: This story has been modified to correct the spelling of Taekwondo.