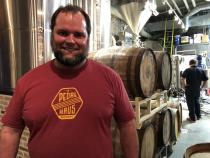 If you like beer, you should care about the environment. That’s the message that a group of local craft brewers wants to send.

Last night, local brewers from Pedal Haus brewery in Tempe and AZ Wilderness brewery in Chandler held a panel discussion alongside representatives from the Tempe City Council and the Central Arizona Water Conservation District Board to talk about how climate change is affecting craft beer. The event was organized by student-led advocacy group Defend Our Future.

It’s a growing industry in our state, and, they say, climate change and budget cuts to the Environmental Protection Agency will hurt its growth.

To find out more about how the environment affects brewing, I went out to Pedal Haus to talk to its head brewer Derek — or “Doc” — Osborne. And he started by showing me around the brewery because when they built it, they had sustainability in mind.