America’s opioid crisis has revealed not only our society’s struggle with addiction, but also chronic pain. As states respond to the epidemic, some patients fear losing access to the medication. But what about those who want to get off it? 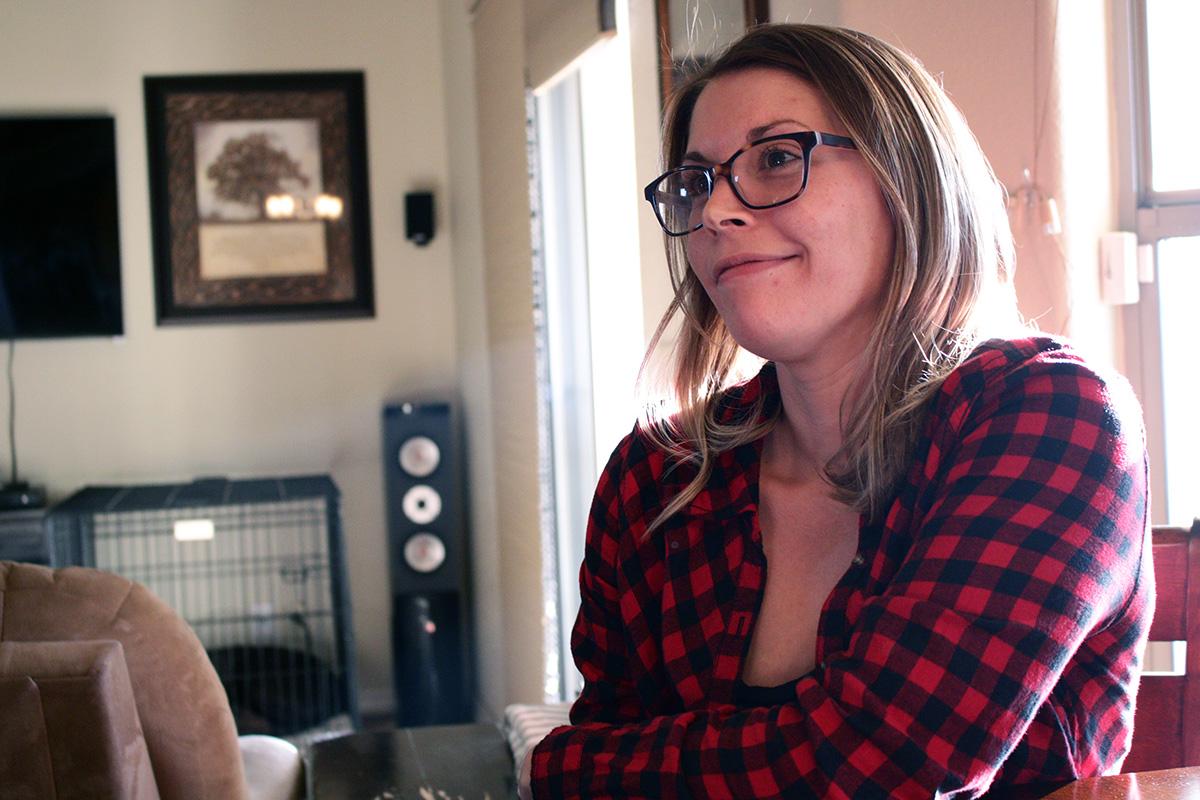 (Photo by Jackie Hai - KJZZ)
Jessica Murphy in her home in Kingman, Arizona.

Jessica Murphy doesn’t actually remember the pain on the day of her accident.

“Even the doctors say it’s just a natural reaction for you to stick your feet out to save yourself,” the 28-year-old recalls.

Murphy was on the passenger side when an ATV flipped in a far-flung corner of northwest Arizona.

“It was in the middle of nowhere. So we had to wait for an ambulance and then travel,” she said.

She broke both of her feet and cut an artery on her hand. By the time she arrived in an operating room, more than 12 hours had gone by. 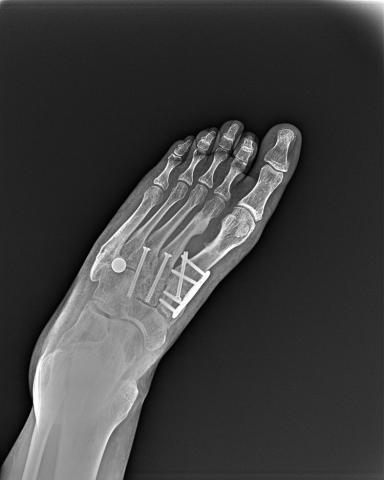 (Photo courtesy of Jessica Murphy)
An X-ray of Murphy's left foot after reconstructive surgery in May 2016.

“This is where it broke right down in the middle. Every toe was pointing in a different direction,” she said.

Nearly a decade later, Murphy slips her feet from her sandals and twirls them around as she sits at her kitchen table in Kingman, Arizona. The light from the fading winter sun plays across the scars, reminders of the scalpel and screws.

Murphy doesn’t like to talk about the details of her pain or the multiple surgeries she’s had.

“I try not to do that with my feet because I have dealt with it so long,” she said.

In the year following her accident, she healed from her injuries. Then a new kind of pain set in, spreading from her foot up into her leg.

"I went back to the doctor and they started me on pain medication,” she said.

So began years of opioid treatment.

One hundred million people in the U.S. are estimated to suffer from chronic pain. Many depend on opioids for relief.

Now as states reckon with the epidemic of opioid abuse and overdose deaths, the medical community and lawmakers are wrestling with how to treat patients who have been on the medication for years. Some fear losing access in the crackdown to reign in prescribing.

That isn’t Murphy’s story, though.

“For any young woman, pain like that really affects your self-esteem,” she said.

A night out with friends becomes a series of internal calculations: where can you go? How much can you walk before the pain gets too intense?

“You are always thinking about it like constantly… you can’t go anywhere without a couple of them,” she said. “It consumes you.”

For years, she said she tried not to let the pain or the pills define her. She even took up a job waitressing, which she loved but was tough on her body.

She sensed the medication wasn’t the ultimate solution, either.

“I was young so it wasn’t till years later that I knew about the medicine what I know now,” she said.

Tragic stories of teenagers prescribed painkillers and sliding into addiction have pervaded the national consciousness, but Murphy never wanted more pills. Just the opposite.

“If it doesn’t totally take you down a terrible road, it at least holds you back … at least. That was my twenties.” 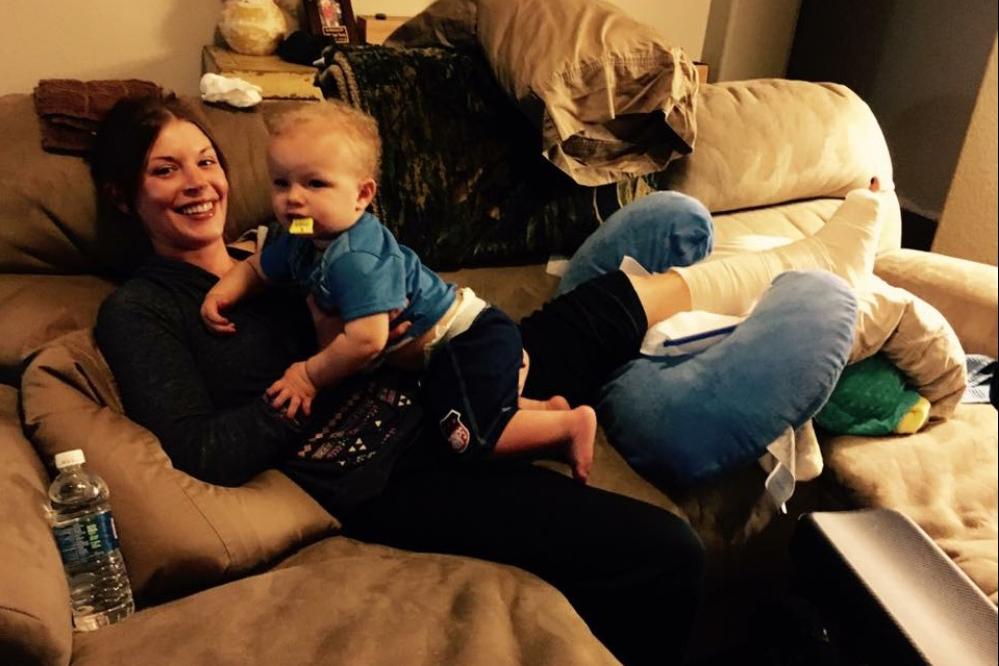 (Photo courtesy of Jessica Murphy)
Murphy recovering at home with her son, Dalton.

Still her body depended on the medication and grew to expect it.

No doctor could tell her why she was in such constant pain. News stories about the unfolding opioid crisis and trips to the pain clinic only heightened her unease.

“Having to pee at the doctor’s, it definitely started making me feel … almost like a drug addict,” she remembers.

By the time she finally discovered what was wrong, her foot had turned purple and brittle.

“My skin was dying from the nerve stuff and I had all this atrophy.”

She had developed Complex Regional Pain Syndrome. It affects the nervous system, causing pain that’s out of proportion with the original injury. There’s no cure, but the symptoms can be managed. That diagnosis led her to reconstructive surgery on her foot and months of recovery. The outcome was still uncertain.

Slowly, she began to notice a difference.

“It felt stronger and my foot has never felt like that. My foot has always felt like it could just crumble,” she said.

She was still taking opioids, though.

She did more research and her doctor warned her that eventually should she get injured, sick or her condition worsen, she’d have to keep taking more to get the same effect.

Jessica Murphy describes how she decided to work with her doctor to get off of prescription opioids.
(Video by Jackie Hai - KJZZ)

Even though her foot was improving, she noticed she still wasn’t feeling better. So one day, she suggested something to her doctor.

Over the next several months, she weaned herself off the medication completely. She began getting up early, exercising, using medical marijuana.

“I still have pain every single day, but I think about it differently. I don’t look at it the same,” she said.

Her brain feels different, too. She’s more lucid and less fixated on what she can’t do. The fog has cleared for her.

“I am able to do more because mentally I am better and stronger. Quitting the medication was really empowering.”

It took her years before she felt ready to take that step. She knows it’s a terrifying prospect for many who live in constant pain.

“I don’t feel like I did anything extraordinary,” she said. “I just made a decision to take care of myself in a different way.”