‘They Are Very Feisty To Say The Least’: Aquaponics Class Explores Options For Raising Prawns In The Arizona Desert 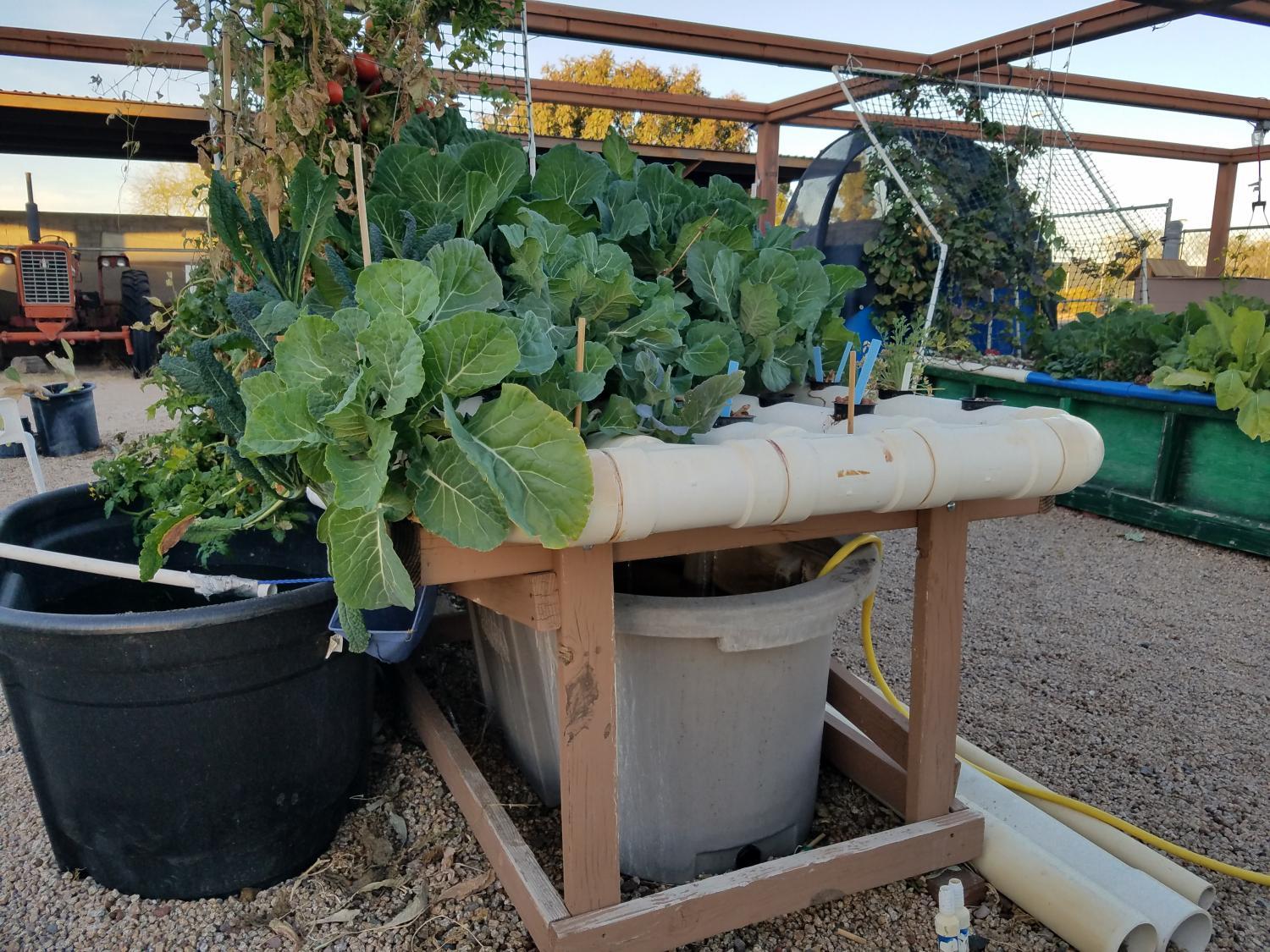 And now we take a look into something fishy. Freshwater prawns are raised right here in the desert, believe it or not.

Prawn farming is alive and well in the U.S. But a class at Mesa Community College wanted to learn how to better raise these crustaceans using aquaponics, the combination of raising fish and growing plants in the same system.

“So we harnessed nature in order to grow food for us - both fish in these tanks and plants out here,” said Dr. George Brooks, who leads the aquaponics class.

The class is part of the Sustainable Agriculture program at the college, and Brooks holds it outdoors in a space that looks like a plant nursery or community garden.

It’s the beginnings of a great salad. Underneath the flourishing plants is not soil, but large containers filled with water, including a kiddie pool.

“We have the fish in these tubs,” Brooks said. “And it uses the waste from that fish, and there are bacteria that turn that waste into plant food. The plants absorb that plant food - fertilizer called nitrate - and they grow very well. But because of that they remove it all from the water, cleaning it for the fish, and it starts all over again.

It’s a closed loop where the fish waste feeds the plants, and the plants clean the water for the fish. Both grow, and both can be harvested. 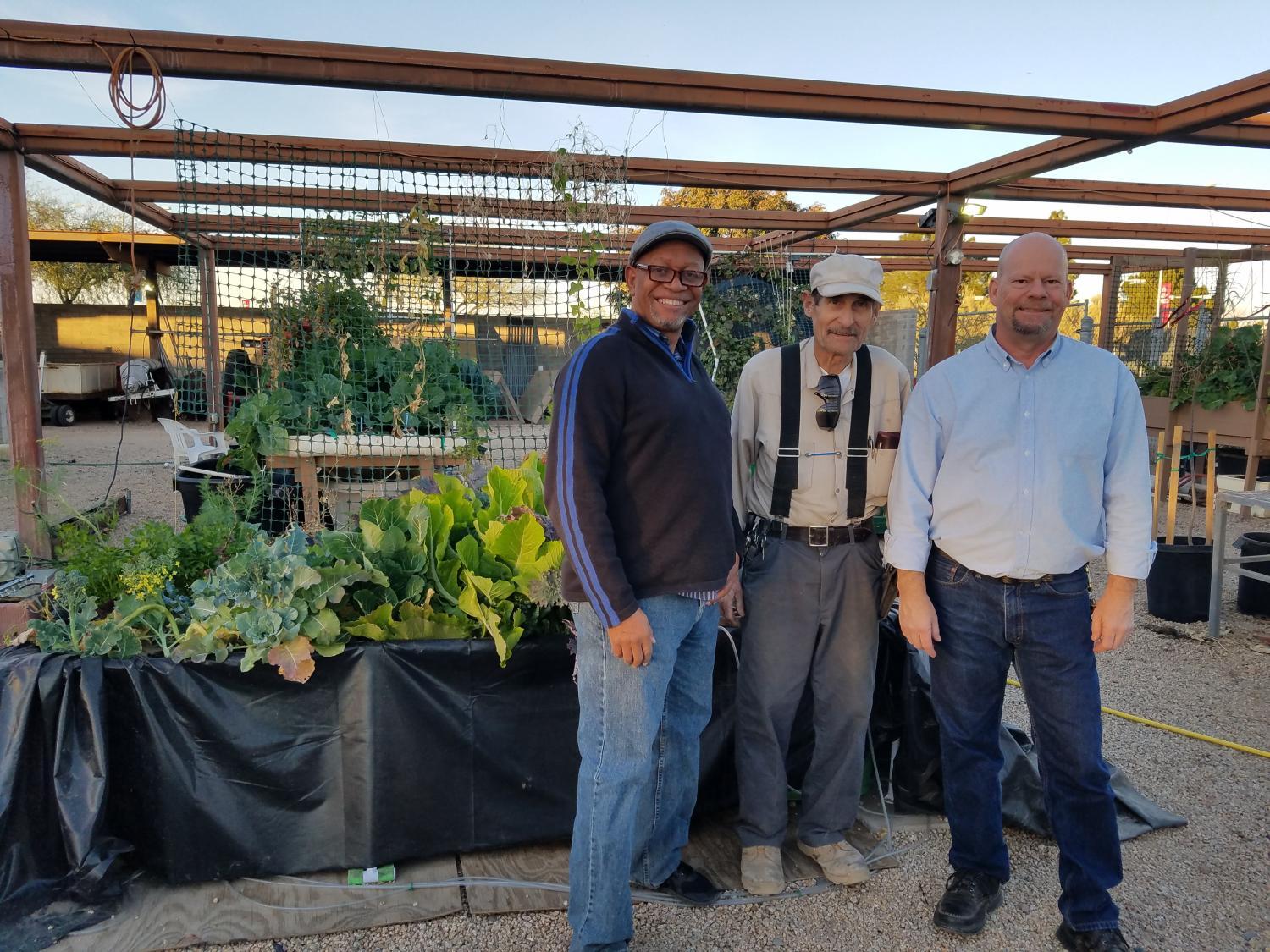 (Photo by Annika Cline - KJZZ)
Dr. George Brooks, left, stands with one of his students (center) and Peter Conden, director of the Sustainable Agriculture program at MCC.

“And the cool thing about it is that you can literally grow food on a parking lot if you really wanted to,” Brooks said.

Yeah — even in Phoenix. Brooks said the prawns are fine with warmer weather — in fact, it’s the cooler days they don’t like. The college’s prawns are actually wintering in a tank with a water heater right now.

But when the prawns were at the college last semester, raising them to be big enough to eat was no picnic - partly because the prawns have a big appetite themselves.

“And that’s they’re biggest problem — they tend to be cannibalistic,” Brooks said. “They are very feisty to say the least. I would personally not want to mess with a big one.”

They behave better with more personal space, but it’s a balance. You have to fit enough in the space you have to make it profitable. One prawn per tank certainly wouldn’t do the job.

Then there was that issue of the prawns eating the plants ... from the bottom.

“They did things we didn’t expect. They ate the plant roots,” Brooks said.

And the tomato and bean plants turned out a little scraggly.

But the findings excite Brooks, who will present them at an upcoming conference. He says some of the prawns’ behaviors haven’t been reported in the research he’s seen so far. This has led to more questions he’d like to explore.

“What kind of roots do they prefer? And how do their nutritional needs affect their aggressiveness if there is an effect?” Brooks said. “In Bangladesh where they come from, they get really really big. Here they don’t get really big. But maybe we can figure that out, and the day we do, that’s going to be a tremendous product for our local farmers to have.”

It’s a fish eat fish world out there.