Untold Arizona: A Paradise For Parrots In Need Of A Home

If you drive north from Benson long enough, past where the road turns to dirt, you’ll reach the tiny community of Cascabel. Decades back, it was a commune. But in recent years, hundreds of new residents have flocked there, to a haven for parrots in need of a home.

But before we get there, it’s important to say how much many people love their birds.

“Then I look and think how clever and how much fun they must have had doing it,” she said, smiling at Zeus, one of her brood. “Right?”

He inched his fluffy white self toward her. He cooed as she gave him a motherly pat.

But Rudikoff knows love is not enough, not when her “feather children,” as she calls them, are almost sure to outlive her. And her human children don’t want them. 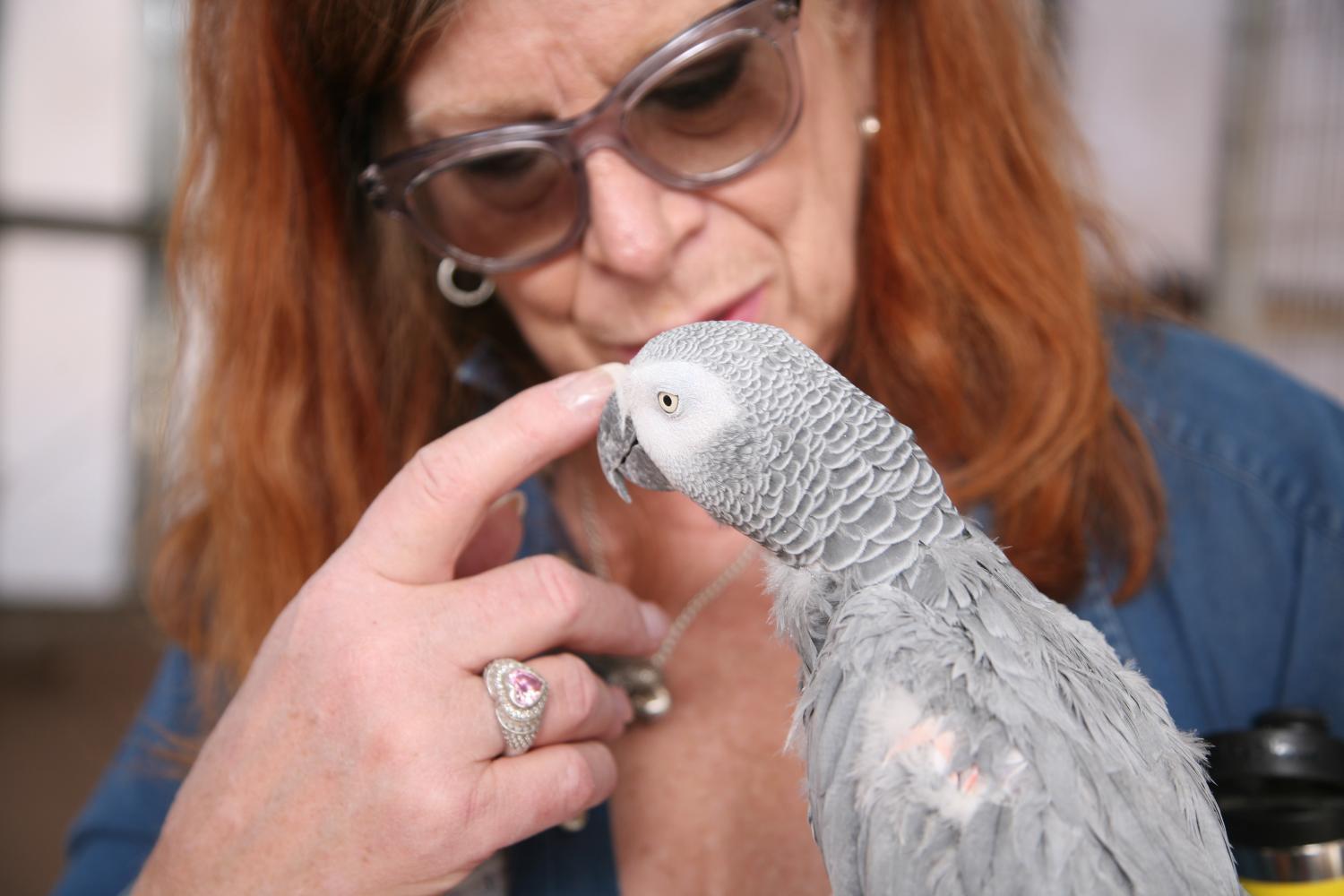 (Photo by Stina Sieg - KJZZ)
Birds have changed Pat Rudikoff's life completely. After realizing her children didn't want to inherit her cockatoos, she became involved with the Oasis and even lives in Arizona part-time now. She's here with Oasis resident Cupid, the Congo Grey parrot.

So now she lives part-time just down the road from the Oasis Sanctuary, run almost entirely on donations. It houses nearly 800 birds, but the demand is exponentially greater, said executive director Janet Trumbule.

“We turn away birds every single day,” she said.

Already that morning, she’d had three calls and two emails about birds needing a home. She may have to say no to them all. There’s so little space left.

“It’s heartbreaking,” she said, her voice breaking just a bit. “And I’m going to cry just thinking about it.”

Getting a parrot is not like getting a puppy. A large cockatoo can live 80 years. A macaw can pass 100. Many people are not built for that kind of commitment, Trumbule said.

But the Oasis is. 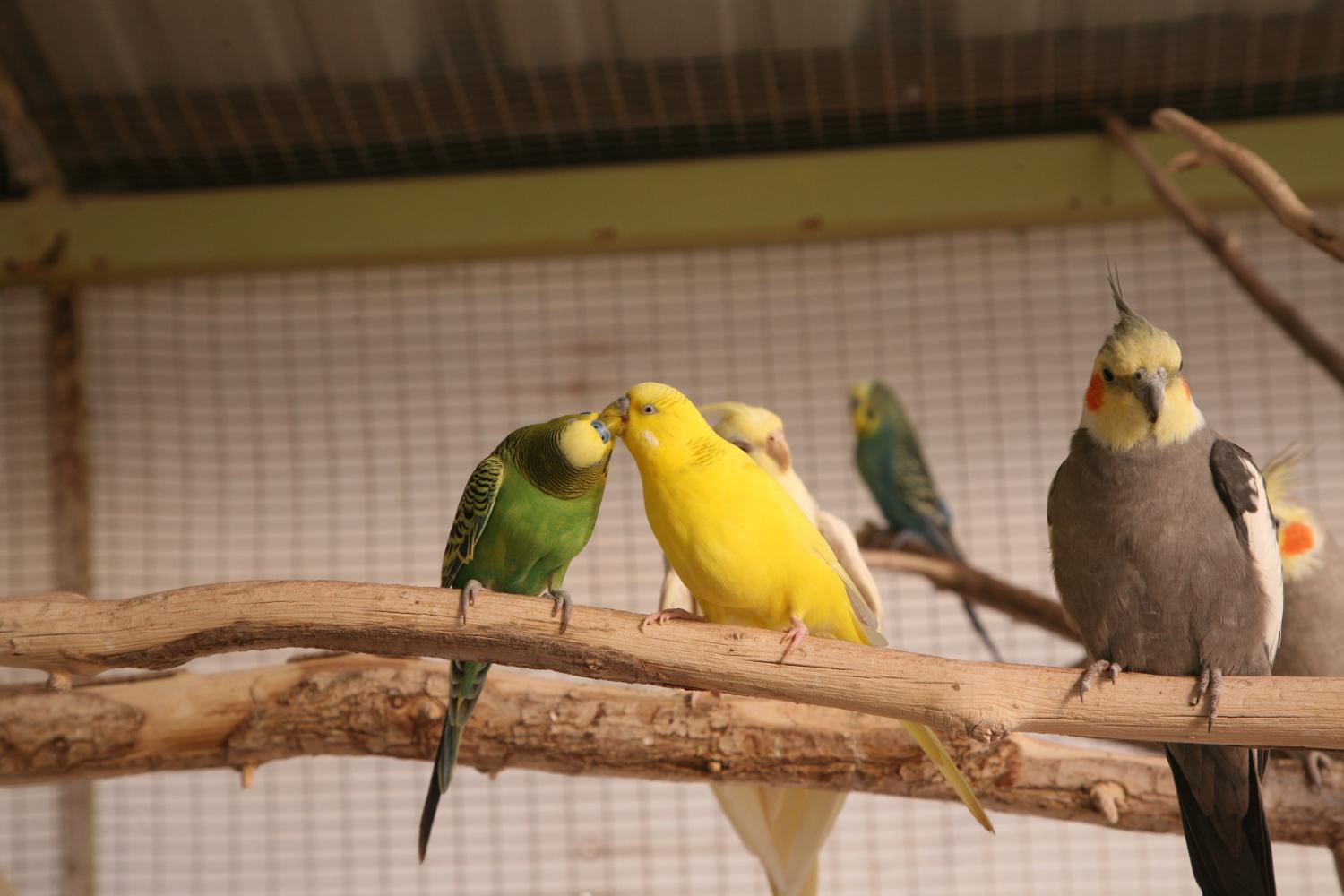 (Photo by Stina Sieg - KJZZ)
People involved in the Oasis hope to give these birds a place perch for generations to come, as it seems unlikely the demand for bird rescues is likely to decrease any time soon.

And Trumble means for life. Birds here aren’t adopted. Those who can live out their days in aviaries — tall, airy buildings filled with various things to eat and perch on and friends to make. But the sick, the old and the ornery end up in their own cages in one of several trailers on the property.

It’s a kind of birdie nursing home, where caretakers like Lillian Morphew learn how to treat and connect with each bird.

“Hey bud!” she said, unhinging a cage and trying to calm an old, speckled grey bird named Egor before giving him medicine.

Morphew doesn’t know a lot about him, except that the African grey parrot is totally blind and says the same phrase over and over: “Egor is a bad bird.”

And that tells you something about his past, Morphew explained. Another bird was found in a trash can, with cigarette burns all over his body. For all these parrots, Morphew is kind of a nurse, kind of a therapist.

“And at least give them love and good food and some consistency in their life that, you know, hopefully they forget some of that really traumatic past,” she said.

The healing can go both ways. Morphew remembers grieving heavily the first time a bird died in her care. She swears a sulphur-crested cockatoo named Skippy could feel her sadness.

“And I just remember going into that room and him going, ‘It’s OK, Skippy kiss?’ and you’re like — it makes you cry even more because you could just sense that he knew what was going on, and he felt that pain, and he was there for you,” Morphew said, starting to tear up. “I mean, they are highly sensitive animals.” TOP: Janet Trumbule holds Gandalf, an Eleanora cockatoo, one of the Oasis' many special-needs birds. LEFT: Sammy, a Goffins cockatoo, is one of many birds who needs specialized care at the Oasis. RIGHT: Lady Grey, a Congo grey parrot, lives in an aviary at the Oasis. In these large, spacious rooms, birds roam and peck and fly free — or as free as they can. It would be unsafe to release them into the wild. (Photos by Stina Sieg - KJZZ)

Rudikoff gets that dedication completely.

Wearing a silver necklace shaped a like a cockatoo face and a jean jacket with her birds embroidered on the back, she recalled a moment 30 years ago. Her brother had just died, and she was crying on the couch.

That’s when Zeus jumped up on her chest and started licking the tears from her face.

“That bird read my soul,” she said. “He read my anguish, which was not verbal. It was purely a vibe. And he tuned into it.”

In turn, she’s dedicated her life to him — and to as many birds as she can. She and her husband travel between Long Island and the Oasis all year. Their second home is just a few miles down the dirt road.

“You know, we tell our kids all the time, we raised them, we put them through college, we gave them the best life possible, and the birds get our will,” Rudicoff said, starting to laugh. “Don’t expect to get rich off our will, because the money’s going to the birds!”

She still holds out hope that someone in her family will want to inherit her cockatoos. But if not, they’ll live here, in their very own aviary, long after she’s gone.

EDITOR'S NOTE: The story has been updated to correct the spelling of Janet Trumbule's name.