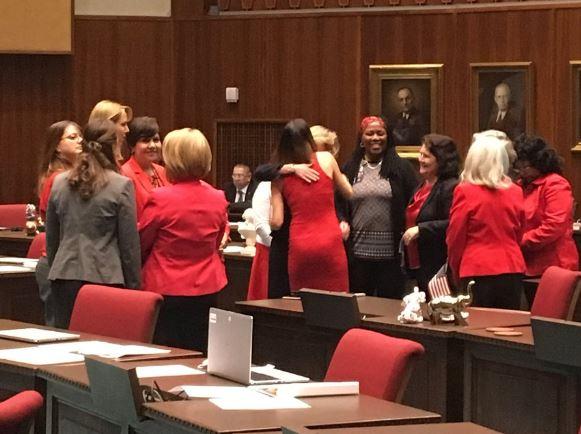 (Photo by Casey Kuhn - KJZZ)
Women of the Arizona House congregate around Michelle Ugenti-Rita before the vote to oust Rep. Don Shooter.

The Arizona Capitol is a place to create policies for living in a civil society. But a comprehensive report found, in one case, those policies were bent and words disguised as humor became disturbing.

Republican Rep. Don Shooter has been expelled after allegations of sexual harassment.

A packed gallery stood almost jury-like over the House chamber with its teal carpet and stately desks Thursday.

An apt setting for what was to be a long, dramatic vote over whether Shooter, from Yuma, would lose his seat in office.

“This is a horrifying day," said House Speaker J.D. Mesnard. "I pleaded with Mr. Shooter to resign. To not force this vote. He would not back down.”

The move to expel Shooter came days after the House released a lengthy report with vulgar details of his actions, words and gestures toward women he worked with over several years.

The allegations include grabbing his crotch near the face of a female lobbyist, leaving anonymous gifts for a female lawmaker and alluding to a sexual fantasy on his bucketlist — which was said to the then-publisher of Arizona’s largest newspaper.

The hours leading up to the vote were just as dramatic — one female lawmaker felt threatened by Shooter’s jokes about the day being good for a hanging.

Mesnard himself removed Shooter’s gun from the Yuma lawmaker’s office prior to convening.

Before the vote, a dozen female lawmakers, all dressed in red, huddled and offered words of encouragement, prayers and hugs to Representative Michelle Ugenti-Rita — a target of Shooter’s unwelcome gestures.

The gavel sounded. And so began an emotional, tearful and distraught voting session.

Shooter started by voting not to remove himself. He said his merit as a politician never wavered — he kept fighting and would not resign.

“I’ve said stupid things, I’ve done stupid things, I stood on the carpet, I took it like a man, I apologized," Shooter said. "I can’t go back to the past, I can't change it, but I can change if given the opportunity.”

Then he dropped the mic on his desk before leaving the floor.

Shooter didn’t face the lawmakers who, one by one, voted and then explained their reasons.

Republican Rep. Noel Campbell was one of three who voted against expulsion.

“I am willing to censure Mr. Shooter, reprimand him and everything that we can do, but when it comes to expulsion, you know, look at yourselves. I think it’s better for the people of his district to make that decision," Campbell said.

Rep. Shooter walks out of vote to expel him. Votes no, one of two nays. pic.twitter.com/FBeFWoQprT

Many consider Shooter a friend and were distraught to vote him out. Some, like Republican Becky Nutt, felt they were all setting a poor example of leadership.

“You guys need to knock it off. What we’re doing here is important," Nutt said. "We have kids on this floor and in these desks. We’re supposed to be an example to them. This is not OK.”

Shooter is believed to be the first state lawmaker to be expelled from office in the #MeToo movement sweeping the nation as women call out harassment in the workplace, like that detailed in the independent report.

Speaker Mesnard called for Shooter’s expulsion Thursday after Shooter sent a dismissive letter about an anonymous victim in that report.

“It’s no small thing to override the will of the voters in LD13," Mesnard said. "Mr. Shooter and his time down here has done good things for the state and his constituents and probably will only be remembered for this.”

In about a week, the Yuma County Board of Supervisors will have three people nominated to choose from to replace Shooter.