Untold Arizona: In The Pleasant Valley War Some Secrets Will Never Be Told 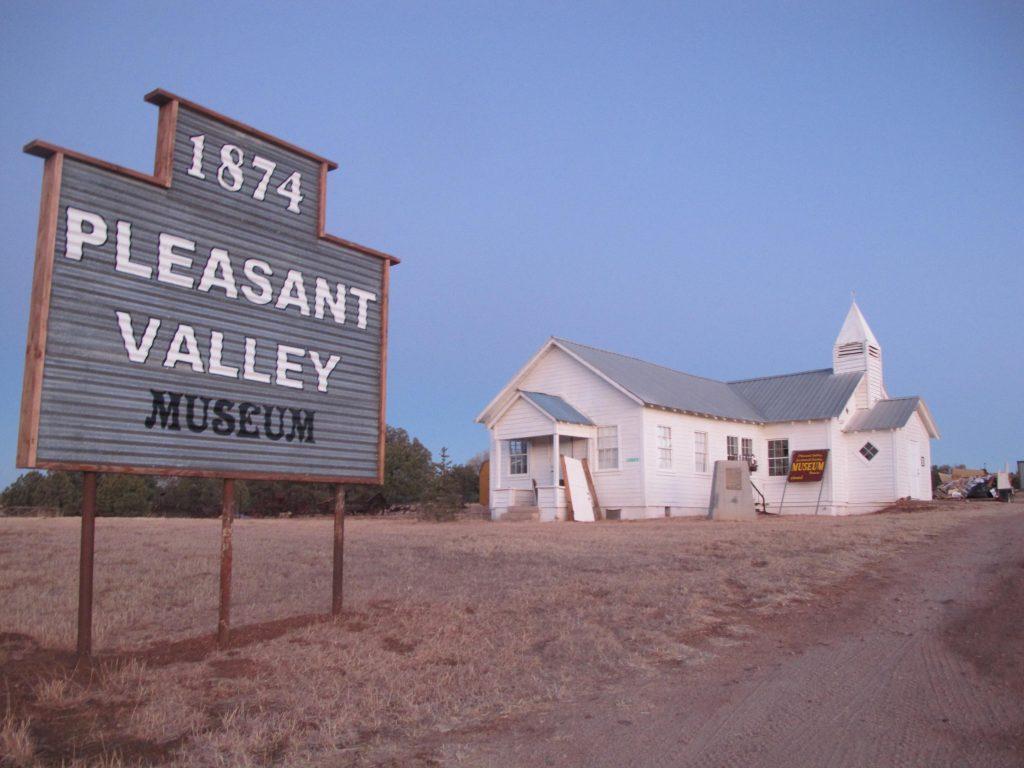 (Photo by Matthew Casey - KJZZ)
Renovations to the Pleasant Valley Museum in Young, Arizona. are almost done. It will reopen in April.

Members of the Pleasant Valley Historical Society sip coffee and nibble brownies on a brisk Saturday morning in January. It’s the group’s first meeting in a big year. Renovations to the museum next door are almost done, and it will reopen in April – just in time for summer tourists.

“To me, it’s important to save the history of the area,” said President Marilyn Freegard. “There is more to this community than just the Pleasant Valley War.”

But many people will visit to learn specifically about the war, which exploded out of a bitter feud between two families that stole cattle.

“Well, the Grahams did it,” Freegard said. “The Tewksburys did it. I mean, I think it’s still happening today. But I won’t mention any names.”

In the late 19th century, the Tewksburys invited the Grahams to settle in what is present-day Young, Arizona. But their friendship became a slaughter, and vigilantes added to a body count that some say grew as high as 50.

Historians have tried to document exactly what happened. But they ran into misinformation campaigns designed to protect those involved, Freegard said.

"So [locals] would not talk about it, and if they gave you any information, it might just be slightly off or even wrong," Freegard said. "We probably will never know the whole story.”

Young sits in Pleasant Valley, where the elevation is roughly one mile high. Tall grass first drew cattle ranchers to this area southeast of Payson, and Native Americans were pushed out.

Now the population tops out at about 700. Many locals go to Bruzzi Vineyard on Saturday afternoons for homemade pizza. Originally from the East Coast, owner James Bruzzi has built a successful business in a remote place that didn’t get electricity until the 1960s.

“You have to want to come here, and you have to try to get here,” he said. “It’s not on the way to anywhere. There [are] no paved roads to get here.”

One factor that makes the Pleasant Valley War tough to follow: there was no traditional villain or hero, Bruzzi said.

“It wasn’t one of those stories like Tombstone where you could say there was a good guy and a bad guy and they were right and they were wrong,” he said.

Jill Fortuny is one of Bruzzi’s customers. She said the history of the Pleasant Valley War was tribal and shameful. But it gets romanticized with other gun violence of the Old West.

“When people ask me about the Pleasant Valley War, my response has always been men with guns behaving badly,” Fortuny said.

Fortuny is Young’s postmaster and her job is tied to another key piece of local history.

“I have big shoes to fill,” she said.

When locals decided to get a post office, they wanted to be called Pleasant Valley. But the name was already taken.

“Therefore, we came up with the name Young because that was the postmaster’s last name,” Fortuny said.

Fortuny once worked at the bottom of the Grand Canyon. She has also wrangled mules on the north and south rims. But she loves being postmaster and the open space around Young.

“When people ask me about the Pleasant Valley War,
my response has always been men with
guns behaving badly."
— Jill Fortuny

When the stars start to twinkle, some locals go to the bar, which Merle Saldeen has owned for more than 40 years.

“(I) felt more comfortable here than wearing a white shirt and tie to work every day,” he said.

Saldeen couldn’t care less about the mystery of the Pleasant Valley War. For him, Young’s greatest history came from the hard-working people who scratched out a living on beautiful and unforgiving land.

When Saldeen first came to Young, there were lots of families with small children. Now, he says, it’s mostly elderly people.

The school has about 40 students, and there are only two people in this year's high school senior class.

“A kid can’t grow up and be a cowboy anymore,” Saldeen said. “Back when we first came here, they had a halfway chance of doing that. But it [doesn’t] pay anything.”