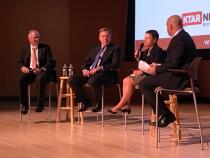 As Arizona lawmakers consider the Gov. Doug Ducey’s budget proposal, the state’s public universities are evaluating the future of higher education spending. The Phoenix Chamber of Commerce brought the presidents together for a panel Tuesday at the Musical Instrument Museum in Phoenix.

Arizona spent 55 percent less per student between fiscal year 2009 and 2018, according to the Joint Legislative Budget Council. Adjusted for inflation that’s $7,962 per student versus $3,572 per student.

NAU President Rita Cheng said the school had to lean on tuition and grants to make up for lost funding in recent years.

“Nearly a decade ago we had almost 50 percent of our support from the state, and now we’re less than 20 percent,” Cheng said.

“What we need from the people of Arizona and from the leadership of Arizona is support for the students from Arizona that want to go to one of the three public universities,” Crow said.

Crow called for $7,500 per student per year in state support for resident students. The remaining cost of education would be supported by university research, grants, non-resident students and private partnerships.

Crow and University of Arizona President Robert Robbins both pointed to Texas’s Permanent University Fund, a $19.5 billion cache that supports higher education in the state. The fund is fueled by 2.1 million acres of land, part of which has been leased to produce oil and gas.

All the presidents emphasized the need to graduate students who weren’t just proficient in one subject area, but able to adapt to workforce needs.

"We've got to be producing disruptive problem solvers,” Robbins said.