When Was The Last Time A Democrat Won A U.S. Senate Seat In Arizona? 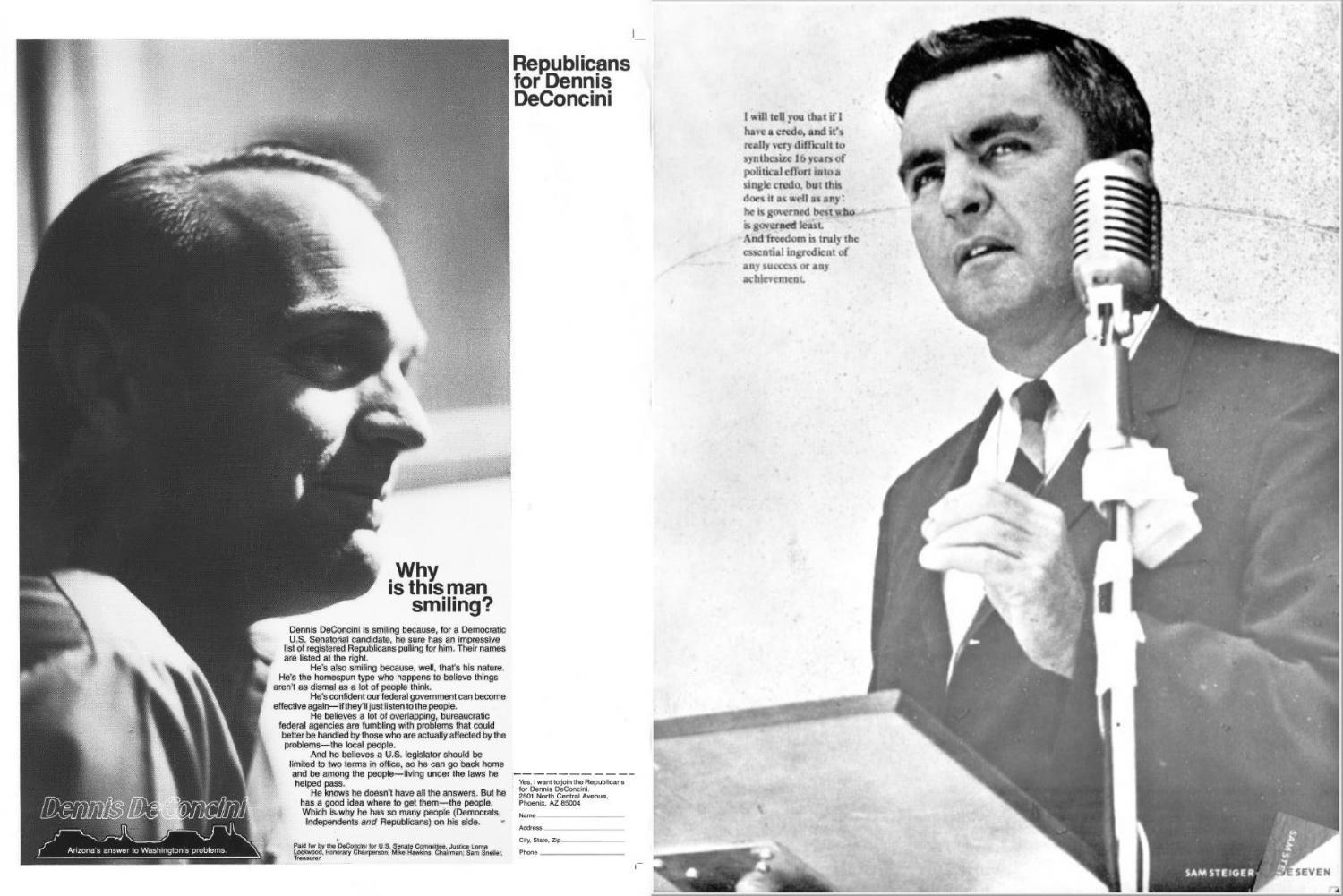 Joe Arpaio, Kelli Ward and Martha McSally will face off in a long GOP primary for Sen. Jeff Flake’s Senate seat, to most likely face Democrat Kyrsten Sinema. With talks of Arizona turning purple, does a moderate Democrat have a chance at a statewide election? This story looks back to see how Arizona’s past may mirror today’s politics.

The country is still reeling from political turmoil in the Oval Office. Arizona Republicans are gearing up for a nasty primary battle for an open U.S. Senate seat. Democrats take wins in races across the country.

Pima County Attorney Dennis Deconcini ran ads on the radio reading messages, and they read like this:

“A prosecutor has a really unique background to be a United States senator. He’s raised with an inquisitive mind, with the ability to investigate, to analyze and not be conned, I think this is experience that would serve well in the United States Senate. Dennis Deconcini, Arizona’s answer to Washington’s problems.”

He was the Democratic candidate for the open seat left by retired GOP Sen. Paul Fannin.

“[Deconcini] was referred to as a 150-pound wet finger in the air because he would always test the winds of politics and come down right down in the middle,” said Richard de Uriarte, a longtime newsman in Phoenix.

“One was very open and feisty, the other was more moralistic,” de Uriarte said of the candidates, respectively.

The battle between Conlan and Steiger became divisive, as Conlan attacked Steiger for being Jewish.

The fight was bitter and Steiger’s son, Gail Steiger, was 20 years old at the time. He worked on his dad’s campaign.

"The establishment, the good old boys kind of circled the wagons around Dad, I think that's why he got the Republic endorsement, too," Gail said. "But all of a sudden, that in-fighting, it wasn't something I had anticipated."

Gail said the Jewish comments seemed very out of place, because his father wasn't particularly religious.

Ultimately, Steiger's campaign came out on top in the GOP primary that a lot of resources were poured into.

“We weren’t looking at the general very hard," Steiger said. "Then the week after the primary we looked at a poll and it was like, 'Oh my gosh, this is trouble. This is not going to go well.”

Democrat Deconcini’s campaign was ready to swoop in and capitalize on the fallout of the primary by presenting the candidate as a moderate. Ron Ober, then 23, ran it.

“[Deconcini] was a really good campaigner," Ober said. "And he had the discipline to let the people running the campaign run the campaign.”

In the general election, both Deconcini and Steiger’s campaigns broke spending records, spending hundreds of thousands of dollars.

Steiger’s camp was stunned by what they saw as a weak Senate candidate rising up the polls.

“He didn’t come up as a threat," Gail Steiger said. "He seemed nice, but being a county attorney is not at all similar to legislating.”

And the GOP candidate shot two burros in 1975, which was a defining moment that tarnished his political career.

“The guy was really kind of out there, I mean he was really fascinating," Ober said. "One of the issues in the campaign was he was a sportsman and he actually shot a burro in the ass.”

The burros were owned by a local in Yavapai County and ran loose near Paulden.

"And people had called Dad about it 'hey can't you do something about these burros?'" Steiger said, "And he told them to go to the Sheriff's Office, that it wasn't something a congressman could do about it."

The police report Steiger filed after going and looking for the burros officially said the animals charged him as he checked their brands. But Gail Steiger heard a different story.

"The story that I heard is, that word came to Dad that the burro owner had told people he had Steiger in his pocket, so no one had to worry that Dad would interfere with the burro mess," Gail Steiger said, "When Dad got that word, that's when he went out there and shot two burros, saying, 'Oh yeah, you think you got me in your pocket? Well, here you go.'"

That event haunted Steiger the rest of his political career.

And, in a time where image and personality became key points of a campaign, Steiger was not able to match Deconcini’s presentation.

“It was in the era after Watergate and one of the key issues became change,” Ober said.

Ober's black-and-white ads for Deconcini featured the county attorney's smiling headshot, along with copy that reads "Why is this man smiling? He's smiling because, for a Democratic U.S. Senatorial candidate, he sure has an impressive list of registered Republicans pulling for him." And the next full-page ad had a list of 1,000 Republican names.

Steiger's ads, Gail said, were not so sophisticated.

"They were terrible TV ads, horrible," he said, laughing. "They were poorly lit, poorly scripted. They were laughable. They just weren't very classy. I thought Deconcini's ads were much better."

This is the same time television had become a turning point in government elections, after the Richard Nixon and John F. Kennedy debates.

With Deconcini's slick campaign and moderate stance, as well as his familial connections with his mom a member of the Church of Latter Day Saints and his mother-in-law then the vice chair of the state Republican party, he had a leg up on the Steiger campaign that was bedraggled after the GOP primary.

The Votes Are In

It was Wednesday, Nov. 3, 1976 and the microfilm headlines read: "Deconcini Beats Steiger In Senate Contest."

“It was a significant margin, it was over early,” Ober said.

That was the last time a Democrat took an open seat in Arizona.

Stieger said his dad focused too much on rural Arizona’s interests to win.

“It was what people in Maricopa County and Pima County wanted to do, that’s where the numbers were and we just didn’t have our fingers on the pulse of that community,” Steiger said.

Those two counties are crucial in today’s races, too.

Newsman de Uriarte said looking back, the nasty primary was another key to Deconcini’s win.

“It’s very very difficult to bring campaigns together, the party together in just a month and a half," he said.

Northern Arizona University political professor Fred Solop agreed. He said a Senate campaign needs to be calculated, then and now.

“It’s very rare that seats are open and don’t have an incumbent running,” Solop said.

A bruising primary is expected this year too. Solop says this Senate race also comes in a similarly tumultuous political environment.

“So we’re anticipating this year what we call a wave election," Solop said. "It’s a unique election where the out party is going to potentially do very well at the polls.”

Nationally, this trend is playing out so far in elections for legislative seats in Alabama and Virginia.

But in Arizona, what would it take for leading Democrat Kyrsten Sinema to take the win today?

Ober thinks Sinema has some Deconcini–like tendencies of being moderate, running on her character. But said, today, both parties are more divided than ever, which means the independents to sway are fewer and farther between.

“The key for Kyrsten is going to be: Will the very, very far left not be motivated and go out and vote for her because she might have made a couple votes that they’re not happy with?” he said.

Ober also points out the last four Democrats to win a statewide election in Arizona were law enforcement officials — something Sinema doesn’t have.

Where Are They Now?

Today, Ober runs a consulting public affairs company called Policy Development Group. He works in downtown Phoenix and still keeps the Deconcini ads from the 1976 race in his office.

He said he still talks to Deconcini every week, and meets up around once a month.

His memories of the campaign go beyond just the political.

"He's colorblind, and his trousers were baggy once and I told his wife, 'He's gotta look younger, he's young,'" Ober said, recalling how he would help Deconcini get dressed for events and appearances. "In the reelection campaign in 1982, we were more sophisticated and I would write down what he's supposed to dress each day."

Though, Ober said, sometimes Deconcini would wear whatever he wanted to anyway.

Gail Steiger is a rancher and songwriter. He never felt the calling to go into politics, especially after seeing what it did to his family.

(Photo by Casey Kuhn - KJZZ)
Gail Steiger plays his guitar on the ranch he works on in Yavapai County.

"It's real hard to be a family member of a politician because you're not supposed to have thoughts of your own. You're a substitute for the candidate," Steiger said. "It's not something I would wish on any politician's family."

But, on reflection, Steiger said it ultimately brought him and his father, since passed, closer together.

"Wherever Dad went, he always had to have some cows nearby," Steiger said. "Even in Virginia, when he lived near D.C., he kept about 250 cows on a ranch."

Steiger followed in those footsteps and ranches about 300 cows on 50,000 acres in the Prescott National Forest. The ranch is only accessible by unpaved, primitive roads an hour outside of Prescott.

And he said he's happy living that way — just talking politics and not being part of it.