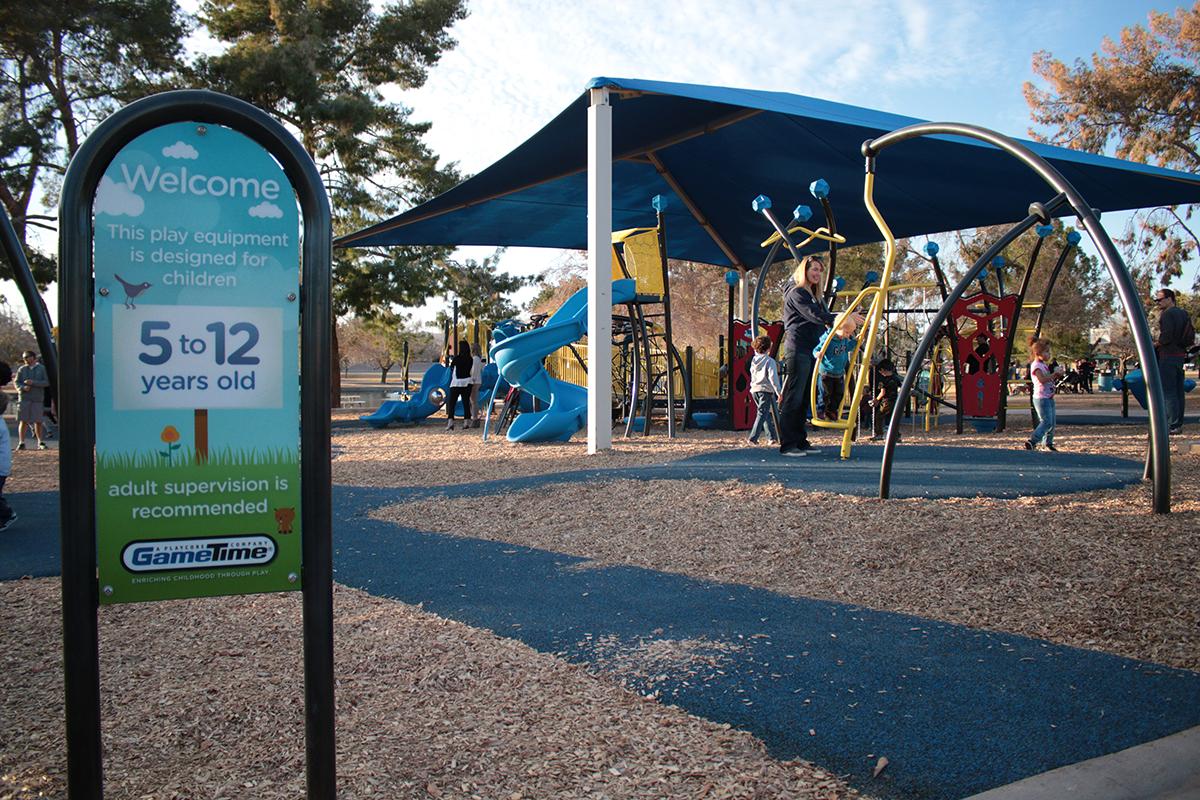 When Vicki Leonard brings her son Dylan to a park, it’s not always guaranteed to be a good time.

“It was always challenging to go to playgrounds when he was littler just because of the fact that he’s — you can clearly see he's different,” Leonard said.

Dylan, 13, is deaf, has cerebral palsy and autism. Leonard knows what it’s like to have people stare or how awkward it is when her family doesn’t feel welcome.

But last week, the city of Scottsdale unveiled a new play area at Chaparral Park. Leonard wasn’t worried about sideways glances or prohibitive equipment. She was just focused on having fun with her son.

“This swing is perfect for him because it helps to keep him stable and kinda locked in,” she said.

She pushed Dylan in a swing that looks like an oversized car seat. It’s designed to help those who struggle to sit up. In fact, most things at this playground are just slightly different than at a typical playground.

Rubber pathways connect the jungle gym to the swing and wind through the play area. This means visitors in a wheelchair or using a walker can still participate in the fun.

A long, wide ramp leads into the main play structure. And there’s hardly a stair in sight.

“That ramp is actually the first thing I noticed,” said Matthew LeVac, an occupational therapist at Dylan’s school, Arizona Centers for Comprehensive Education and Life Skills (ACCEL). “Obviously the width is good because it allows someone in the wheelchair to come up and also have someone on the other side kind of pass them so if you're a caregiver and your child is wheelchair bound, the last thing you want to do is present them as a burden.”

LeVac also pointed out side-by-side slides. “This allows for a caregiver to stay right beside someone as they go down the slide. If you’re fearful or not confident, this makes that activity possible. Every child learns through play and if you don’t have access, you don’t get exposure to those humps and learn and develop the brain.”

This playground was designed for access, but also to challenge and engage visitors. There’s monkey bars, climbing ropes and a tall jungle gym. 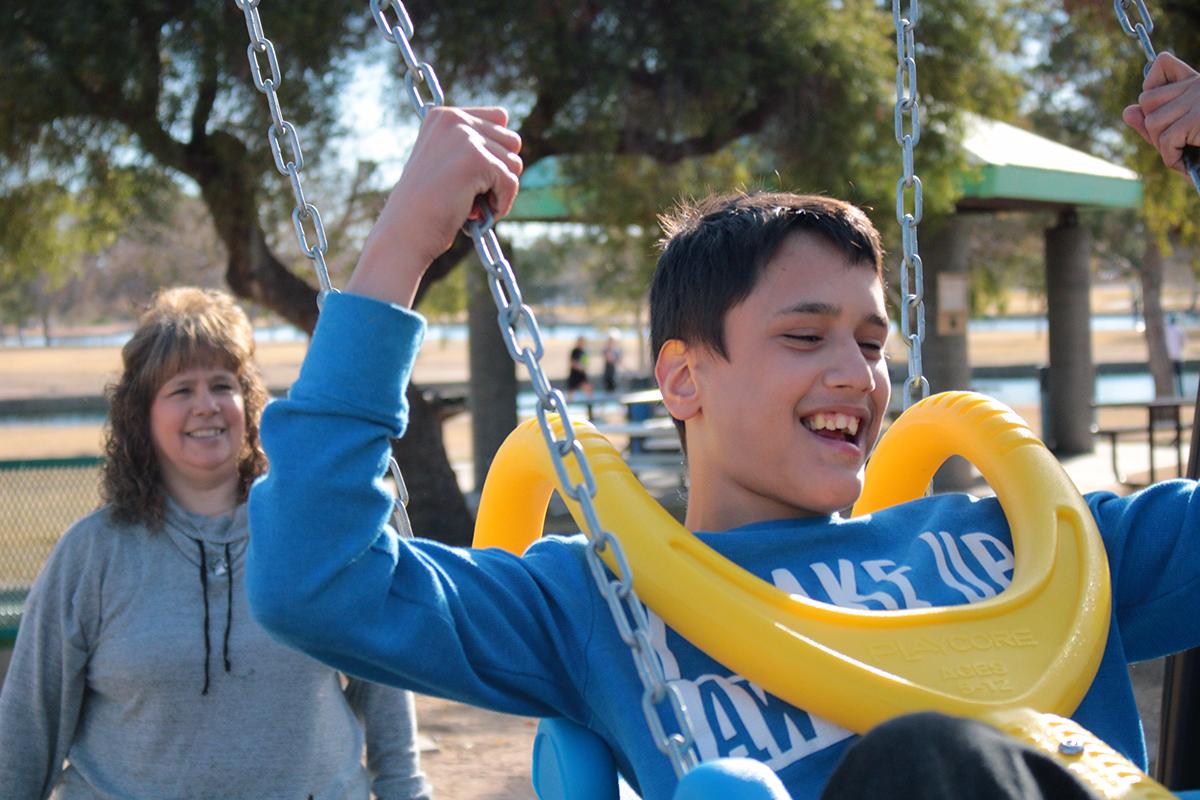 (Photo by Claire Caulfield - KJZZ)
Vicki Leonard pushed her son, Dylan Reda, 13, in a swing that specifically designed for those who struggle to sit up.

Although it took a couple of tries, Dylan had a triumphant smile on his face when he made it to the top of the jungle gym. After his mother helped him down, he again made a beeline to the swings.

“The swing is his favorite thing and so he always runs to the swing,” Leonard said.

This is pretty typical for people on the autism spectrum, LeVac said.

“Here, I’m seeing a lot of options for the swings,” LeVac said. “A lot of different motions that kids on the spectrum really crave.”

The playground has four types of swings. One looks like a brightly colored maypole, and up to three kids can sit while spinning in a large circle.

SEARCH: Find an accessible playground near you.

“It would be fun while also strengthening a child’s core and leg muscles,” noted LeVac, as he hopped on the swing and pushed off.

“Oh yeah, I wish we had one of these at the school,” he said.

Another allows for a small child and a parent to face one another and swing.

“I definitely wish that was around when Dylan was littler,” said Leonard, still pushing Dylan in the secure swing. A dozen yards away, a little girl was perched on a stool that was slowly spinning. She was giggling and holding on tight, but that particular piece of equipment was actually designed for someone with a cognitive disability.

Spinning can be beneficial for those with attention deficit disorder, autism, anxiety and other emotional issues, said Laura Montgomery, a speech and language pathologist at ACCEL.

“It looks like a separate little area for them to calm down,” Montgomery said. “Where they could spin while their caregiver or a parent helps them communicate what the issue was.”

While the rubber pathways and the secure swings are obvious, it’s the small details like the rotating stool or the slightly wider ramps that take this playground to the next level. 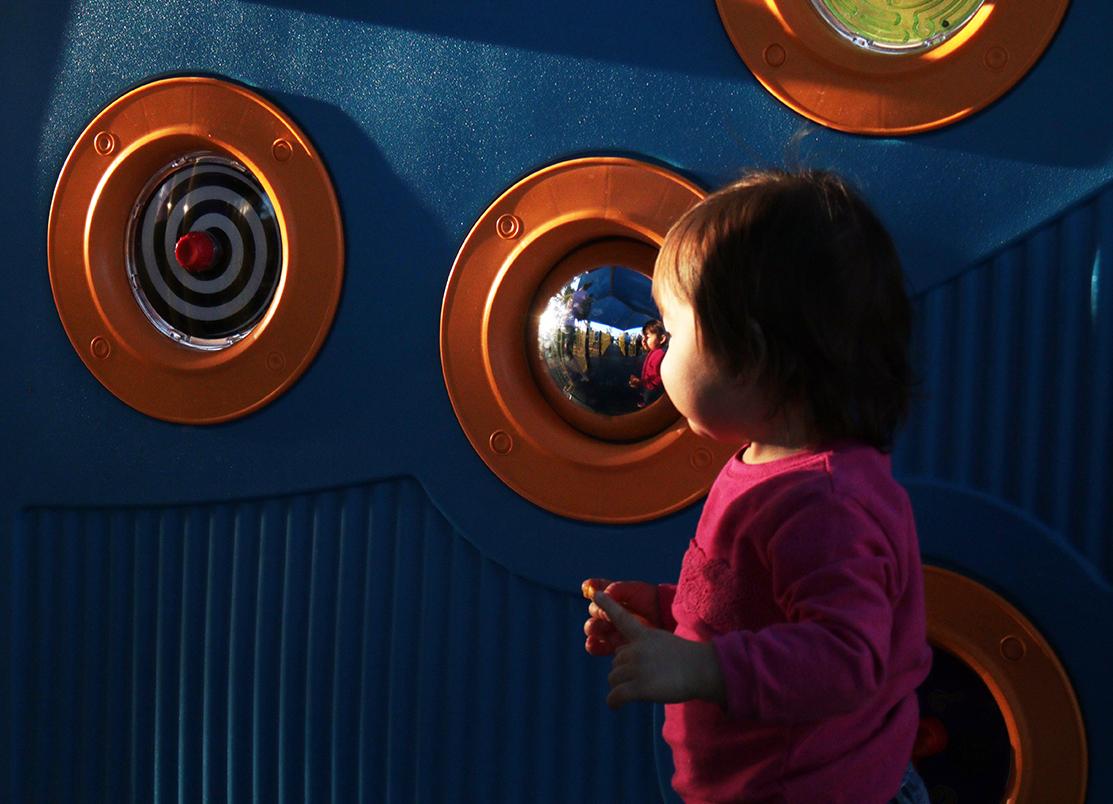 Claire Caulfield/KJZZ
A toddler stands in front of an interactive wall at the Scottsdale playground. Mirrored surfaces are engaging for younger children and those with cognitive disabilities.

Walking around the park, Montgomery said she’s impressed with all the interactive elements. She tested a sound machine that plays different instrument sounds — or cat meows — at the touch of a button.

“This would be great for teaching different sounds,” she said.

“I mean we kind of take it for granted that all our senses work and sync up with each other properly,” Leonard said while holding Dylan’s hand and helping him push a button on the sound machine. “But these wheels or these noises — it exposes them to things that are a little different and that’s really important in a child’s development with disabilities.”

But the specialized equipment isn’t cheap. The Salt River Pima-Maricopa Indian Community gave the city a $265,000 grant, and Game Time Corp., the company that built the equipment, discounted the playground equipment by $70,000.

The pricey equipment might deter other communities from installing fully accessible play areas, but Leonard thinks the cost would be worth it by helping build a community.

“Dylan is an only child, so I never really had to have that challenge of an able-bodied child with a disabled child,” Leonard said. “But thinking about it now, this would adapt to both children for sure.”

And that’s really the goal of a park like this, said Bret Jackson said, parks and recreation manager for the city of Scottsdale. 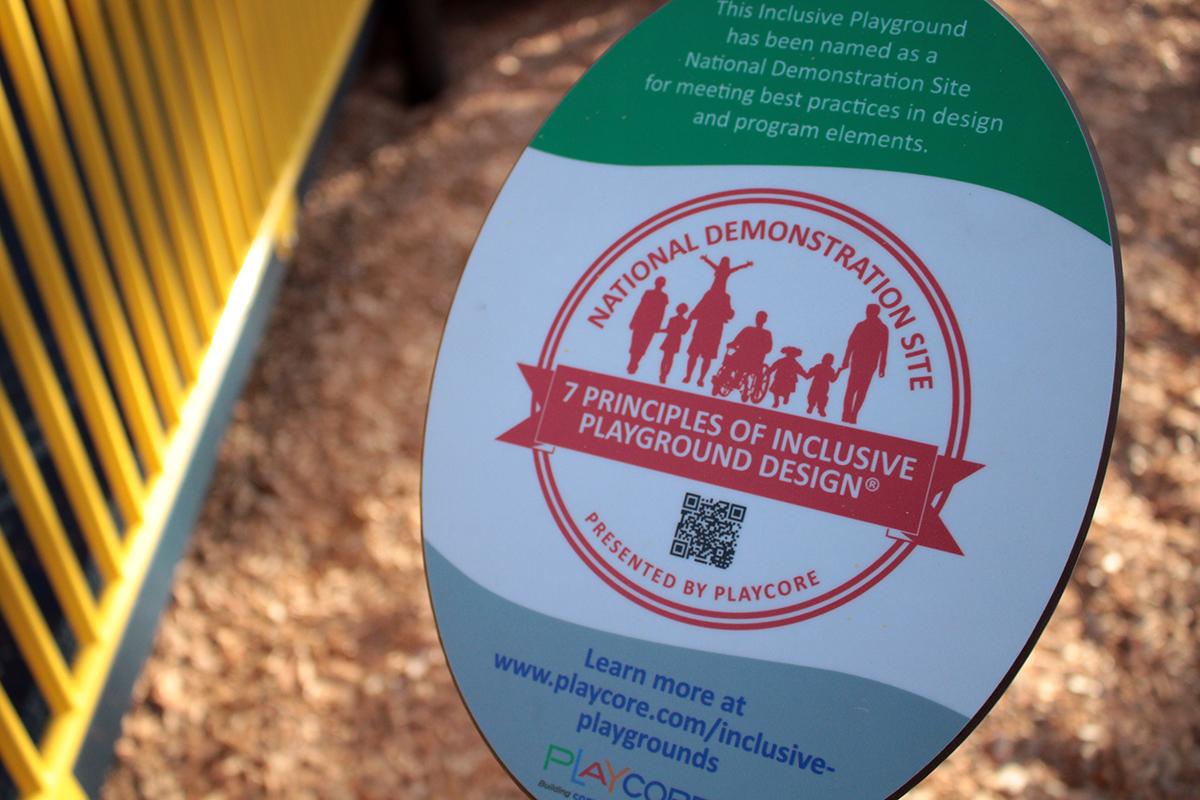 (Photo by Claire Caulfield - KJZZ)
The Scottsdale playground is a national demonstration site, and will be used as a model for future playgrounds around the country.

“Being accessible doesn't always mean you're included necessarily, so this playground is an inclusive playground and our goal is to have those with disabilities with and not just alongside those who are able-bodied,” Jackson said.

Chaparral Park was chosen for the city’s first fully accessible playground because it’s near the Scottsdale Accessible Services Program building. Kids in its after-school program have a new place to play that’s in a public setting, so able-bodied kids can play and learn alongside them.

That’s one of the reasons Jesse Bertelsen was excited for the park. He lives nearby and has a 3-year-old daughter.

“I don’t think I've seen anything like this. This is really special and I think it will bring a lot of the community outside from out behind their iPads and have a lot of fun,” Bertelsen said.

For Leonard, she doesn’t want Dylan to grow up knowing and playing only with other disabled children. She said she hopes families of all abilities and ages will come to the park and play together.

“And if you see a family that's struggling just reach out. They may just need you to, I don’t know — just hold her drink while she lifts her son out of the wheelchair,” Leonard said. “They just want to be included. They just want to be embraced in the community like every other family is.”

“Just sitting here while we've been at the park I've been watching parents being really involved with their children I’ve seen senior citizens come up and interact so there's really a whole community involvement in this park,” she said. “Everyone's taking part in this which is really what we want. We want this to be a successful community activity where everybody's spending time together.”

EDITOR'S NOTE: This story has been updated to correct the age of Dylan Reda.
Education The Show