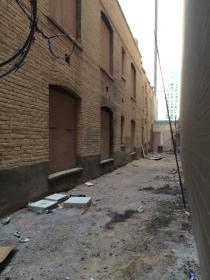 (Photo by Mark Brodie - KJZZ)
You can still see the brick exterior at the back of the building. 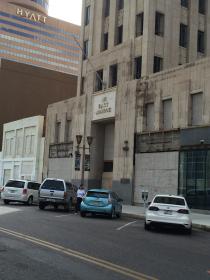 (Photo by Mark Brodie - KJZZ)
The Steinegger Lodging House is the smaller, white one to the left. The larger Professional Building will be converted into a hotel.

The Steinegger Lodging House is on Monroe, between Central Avenue and First Street, and it’s frankly not much to look at. But Rob Melikian, who describes himself as a hopeful historic preservationist, says it’s what’s on the inside that counts.

Melikian’s family owns the San Carlos Hotel about half a block away, and he says the Steinegger Lodging House is tied to one of Phoenix’s pioneers.

The property, and the Professional Building right next door, are owned by the Minneapolis-based firm CSM. An official with the company says it plans to turn the larger building into a hotel, which he expects to open around this time next year.

Melikian says he’d like the company to sell him the deed to the Steinegger property, which he’d then turn into a bar and restaurant, or anything else CSM wants. But the CSM official says while it does plan to eventually do something with the Steinegger Lodging House, he couldn’t talk about what that might be .