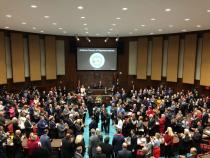 Gov. Doug Ducey spent several minutes of his State of the State address on Monday on education. He segued to the topic by pointing out that prison spending in Arizona is decreasing while education spending is on the rise.

Ducey highlighted gains like the fact that three Arizona schools ranked in the top 20 for academic improvement nationwide.

The governor also addressed school spending. He pointed out that state lawmakers have committed $1.7 billion in new state funding to public education over the last 3 years, and he pledged to ensure future school spending increases would be higher than inflation as long as he’s in office.

"This week I will release my budget," Ducey said. "It will include a full commitment to accelerate the state’s K-12 investment and restore long standing cuts from the recession made before many of us were here."

Ducey’s focus on education wrapped up with a salute to Arizona’s public universities for what he called encouraging debate and free speech.

Education The Show
Interview from The Show