Prop 480 Proposes To Build A New Hospital In Maricopa County 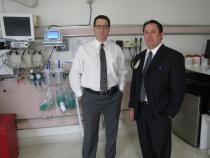 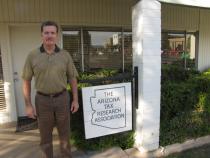 (Steve Shadley/ KJZZ News)
Kevin McCarthy with the Arizona Tax Research Association and Chair of the No on Prop 480 campaign standing outside his office near the state capitol. 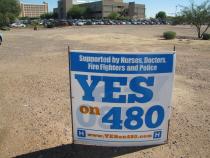 (Steve Shadley/ KJZZ News)
A Yes On Prop 480 Campaign Sign at the corner of 26th Street and Roosevelt in Phoenix with the Maricopa Medical Center in the background. 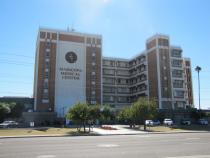 (Steve Shadley/ KJZZ News)
The Maricopa Medical Center is located at 26th Street and Roosevelt. It was built in 1972 and Prop 480 supporters say it needs to be torn down to make way for a new hospital.

Maricopa County voters will be asked on Nov. 4 to approve a health care package that includes construction of a hospital to replace an aging medical center that serves low-income patients.

Proposition 480 supporters said it would also upgrade one of the state’s largest burn units and improve mental health services.

The proposal would allow Maricopa Integrated Health System to borrow $935 million by issuing bonds. Most of the money would be used to build a new hospital where the current Maricopa Medical Center is located in central Phoenix on Roosevelt and 26th street.

Eric Katz is the medical center’s chairman of emergency medicine. During a tour of the hospital, he pointed to a crowded treatment area where patients lie in beds separated only by curtains.

“It’s a hard place to take a history on a patient," Katz said. "If you have to ask a patient about their psychiatric conditions, things like about HIV, then you are doing it in an area where the patient feels like they have no control and they have no privacy whatsoever. That makes our jobs very difficult."

The shortage of space isn’t the only problem. The Maricopa Medical Center opened more than 40 years ago. Katz said the building is falling apart and can’t withstand any more remodeling projects. He said it contains asbestos and isn’t wired for high-speed computers and the latest medical equipment.

“We’re not in 1972 anymore and there are several things about the design here that have become antiquated and really cost more to continue to operate than it would to create a new facility,” Katz said.

The Maricopa Medical Center has 525 beds. The new hospital would have about half as many beds, but there would be more private rooms for patients and more workspace for doctors. Outpatient clinics would also be updated in hopes of keeping more patients healthy enough to stay out of the hospital. Mark Dewane is a member of an independent board of the special hospital district created about a decade ago. It oversees the medical center and its 13 clinics. He said Prop 480 would increase property taxes in Maricopa County over the next 30 years until the project is paid off.

Prop 480 opponents have launched a media campaign questioning the costs of the proposal.

“Feel like giving the government more money? I don’t. That’s why I’m voting against Prop 480," said Kevin McCarthy.  He's president of the Arizona Tax Research Association and chairman of the “No on Prop 480" campaign.  He said the $935 million price tag supporters promote is not the whole story.

“The cost of this bond to Maricopa County taxpayers is going to be $1.6 billion," McCarthy said. "That’s the amount of principal and interest that taxpayers will have to come up with to pay back the $935 million in bonds that were sold.”

He said this is a bad time to propose a tax increase in Maricopa County.

“It’s hardly the helping hand that either the homeowner or the business owner is looking for to get back up through the recession,” McCarthy said.

“Arizona ranks 43rd out of the country for doctors per capita," Dewane said. "If a doctor comes through here and gets their GME, their graduate medical education, 75 percent of the time they’re going to stay and open a practice here."

Prop 480 supporters said the Maricopa Medical Center serves a large population of patients who are covered by AHCCCS, the states’ Medicaid program or they don’t have any insurance at all. Prop 480 opponents said those patients can find care at any hospital in the state.