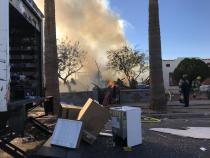 An explosion Thursday morning at a house just west of downtown Phoenix rocked part of the city.

Witnesses reported seeing a massive fire and a plume of dark smoke, following a blast that was strong enough to shake nearby buildings.

“Both were critically injured,” he said. “One was pronounced dead at the scene by our crews. And the other has been transported as a trauma (patient) to a nearby trauma center.”

Investigators were on scene and working to figure out exactly what caused the fire.