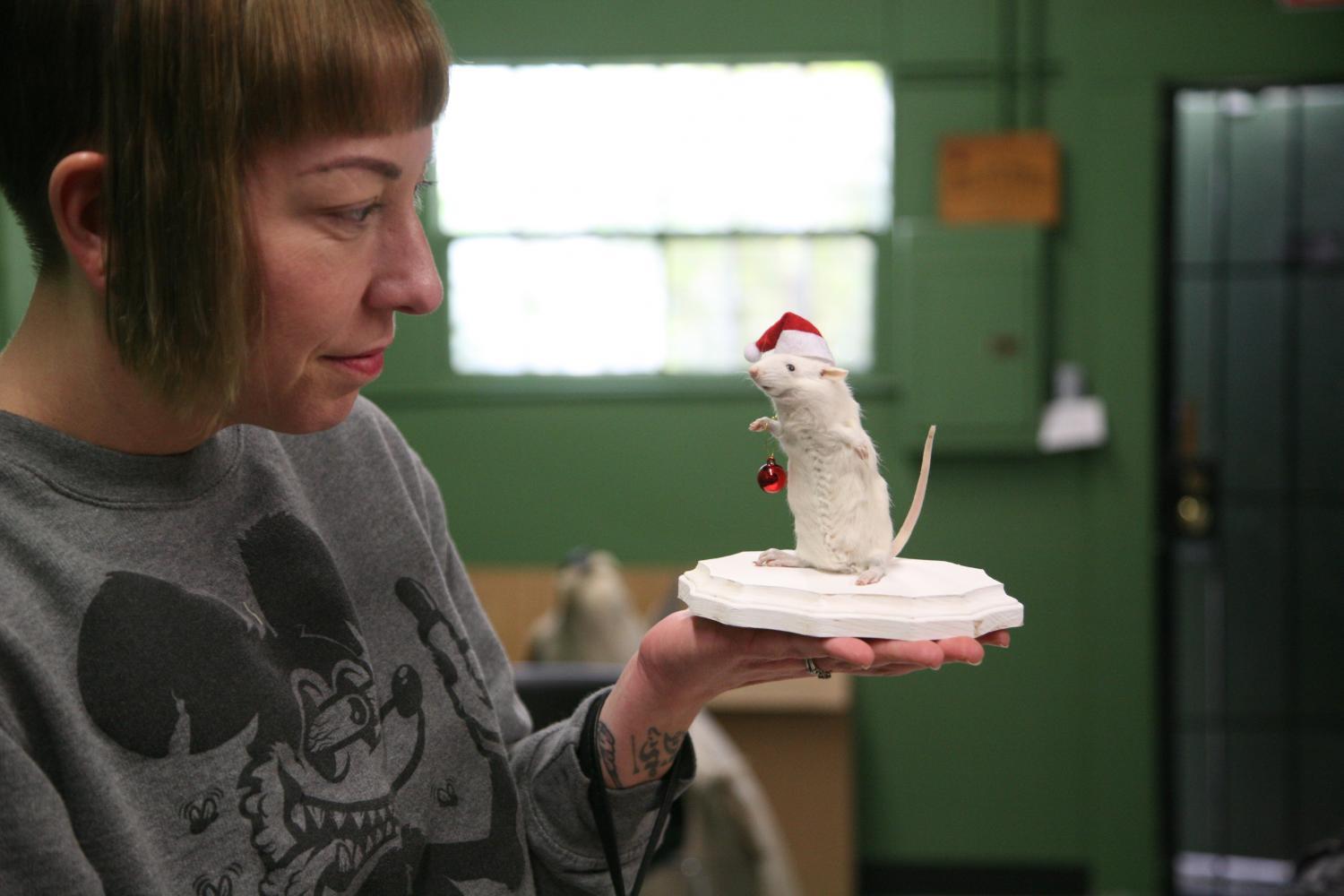 (Photo by Stina Sieg - KJZZ)
Courtney Perez was one of half a dozen taxidermy novices who made some very unique Christmas presents at a hands-on workshop at the Phoenix store Curious Nature.

What’s the very first step to reanimating a rat? Choosing one.

“Oh, baby,” Renée Harper cooed, cradling hers as though it was a sleeping kitten. “Mine was a boy, I think.”

He was small, white and limp.

“He’s not there anymore,” Harper said. “It’s just a shell of what it was.”

With her bright pink hair, bejeweled cat-eye glasses and hearse parked outside, Harper might not fit your idea of a taxidermist.

Taxidermy has been around since the 1700s, but in the last decade or so, the art of preserving dead animals has been given new life. All across the country, communities of amateur taxidermists have sprung up, from Minneapolis to Brooklyn – and here in Phoenix, where this small group was taking an introductory course.

To teacher Doug James, Harper fits right in with a new, experimental wave he’s seen sweeping through the taxidermy world, full of young people – and women. 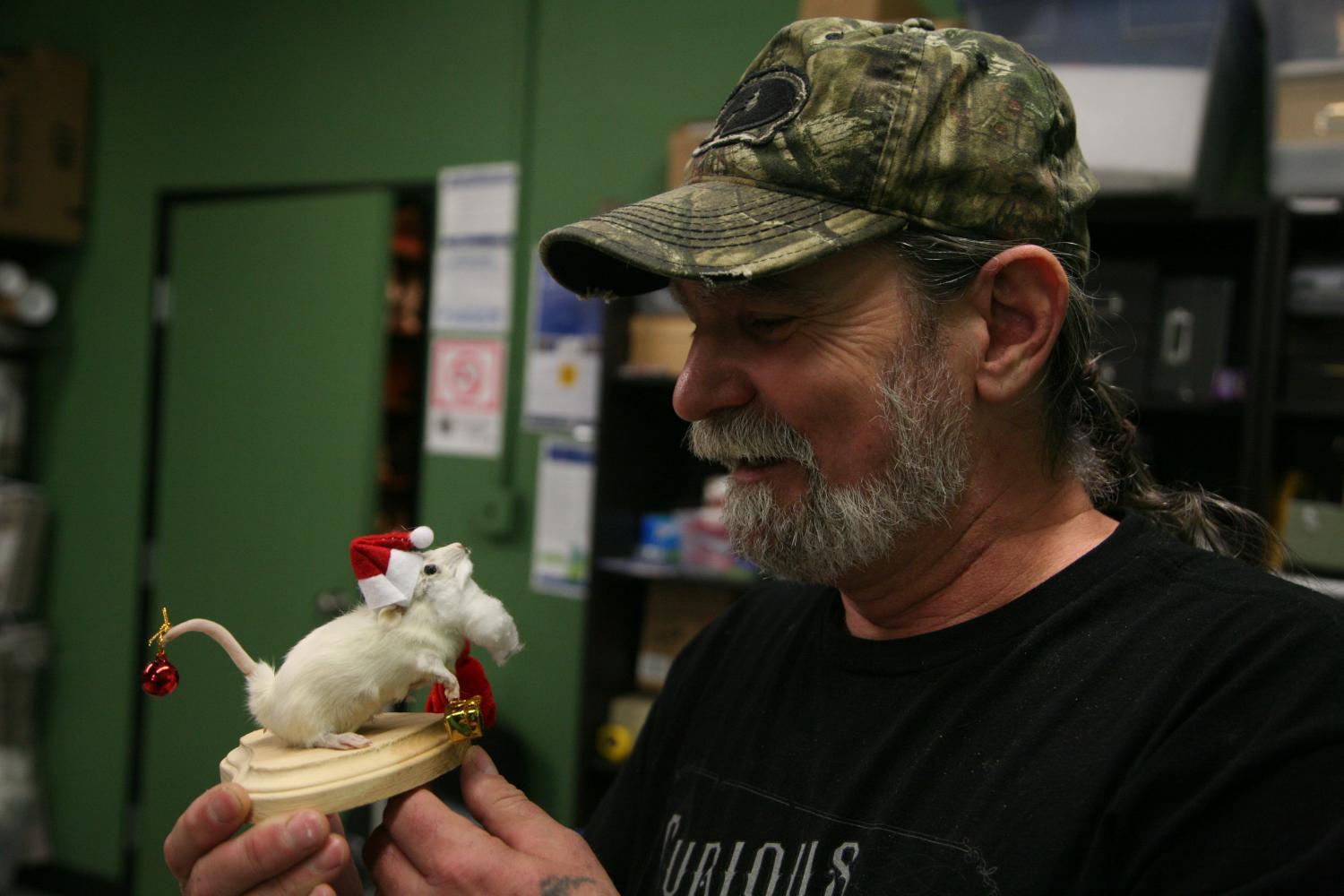 “And the old generation is kind of looking at the young generation and going, ugh!” he said.

James looked every bit old-school, with his pony tail and camouflage baseball cap, and was steeped in traditional techniques in his dad’s taxidermy shop. But he’s happy to teach anyone who finds their way to this back room at a store appropriately named Curious Nature.

In front of the class, he flipped his rat on its back, and touched his knife to its chest

“I put a little pressure, and I’m going to stop,” he said, cutting a fine line to expose what looked like raw chicken. “And I’m spreading the skin apart as I go.”

And go and go. He sliced and tore a delicate seam down the middle of his little creature as everyone followed suit.

Renée Harper did not look happy. “Oohhhhh,” she said, frowning.

Taxidermy students Renée Harper and Jessica Hager, and instructor Doug James talk about their experience with the class.
(Video by Stina Sieg - KJZZ)

As they peeled off the skins like wet suits, there was a mix of wonder and wincing from the group.

Hager had dark lipstick, dramatic eyebrows – and her own flock of taxidermied friends back at her home in San Diego.

“People think I’m a little weird. And they’re like, ‘Oh my God, Jessica, what’s your problem?’” she said. “I don’t have a problem. I just have a deer.”

And a deer foot and a mink, all dressed up for Christmas. It’s kind of creepy, Hager said, but she loves animals – and sees this as a way to preserve their beauty forever.

Curious Nature owner Mason Conway gets it, though he knows a lot of people probably don’t.

Like so many in this new generation of taxidermy fans, he doesn’t believe in killing animals for display.

“So, I don’t want anything to die,” he said. “But if it’s already dead, and if some way I can use that and turn it into something educational or beautiful or a piece of art, you know, that’s what we’re all about.”

Not that the metamorphosis comes easy. It took the class hours – stuffing the insides with shaved wood and clay, threading wire through those thin rodent limbs, replacing their eyes with black glass beads.

Renée Harper tapped out when it came to scooping the contents from the skull. Her husband took over and she hopped on her phone to look at cat pictures.

But by posing time, she was back in the game. Harper named her rat Borax, after the fluffy white compound that was piled like snow all over the table.

Standing up straight, his arms in front of him, Borax was wearing a shiny green scarf and – like almost every rat in the room – a tiny Santa hat.

“He’s, like, come back to life,” Harper said, smiling.

Jessica Hager’s rat was reborn as Elsa, the snow queen, complete with an itty-bitty tiara. As she filled in Elsa’s bald spots with glitter, Hager said she has new respect for all those taxidermied pieces back home.

Now, she has a brand-new table centerpiece, just in time for Christmas.

EDITOR'S NOTE: This story has been updated to correct the spelling of Jessica Hager's name.