How Birth Control Could Help The Wild Burro Population

On a sunny, cool day last month on the Black Mountain Herd Management Area (HMA) in northwest Arizona, Grace Kahler of the United States Humane Society spotted a wild jenny - a female burro - with her binoculars.

“She’s just a typical gray burro,” Kahler said. “You look pretty young. You got thick stripes on your right side.”

Kahler waited for the jenny to turn just a little bit more before seeing the information she needed: “01-7,” the burro’s given number as part of the control group in a research study.

Kahler and other Humane Society researchers are working with government officials to find the most cost-effective way to dart wild burros with Porcine Zona Pellucida, or PZP. It’s a federally-approved vaccine that keeps burros and horses from getting pregnant for about one year.

If a vaccination program can work in a vast, open rangeland like the Black Mountain area, applying that knowledge elsewhere in the west could save taxpayers millions of dollars. That’s because there are too many wild horses and burros on Western rangeland, according to the Bureau of Land Management.

The BLM is trying to keep the number of animals on the range below a certain number - the Appropriate Management Level (AML). That’s the number it says a given land can sustain without serious damage to the ecosystem. Euthanizing horses and burros is illegal, as is selling them to slaughter. People aren’t adopting enough animals, either.

The strategy the BLM has used most is rounding up horses and burros and holding them on ranches. Caring for the animals off-range costs tens of millions of dollars each year, and the BLM still isn’t below its AML.

RELATED: Who's Gonna Ride Your Wild Horses? Opinions Differ On Managing Herds In The West

The BLM estimates Arizona’s Black Mountain HMA can handle around 478 wild burros. At last count, over 1,700 burros live there. One consequence of overpopulation is overgrazing, which can harm native animal species and ranch cattle who use the land.

“They will still come into heat. They’ll still have all their natural behaviors.” Kahler said of PZP. “The sperm can’t penetrate the egg. So they just can’t get pregnant.” 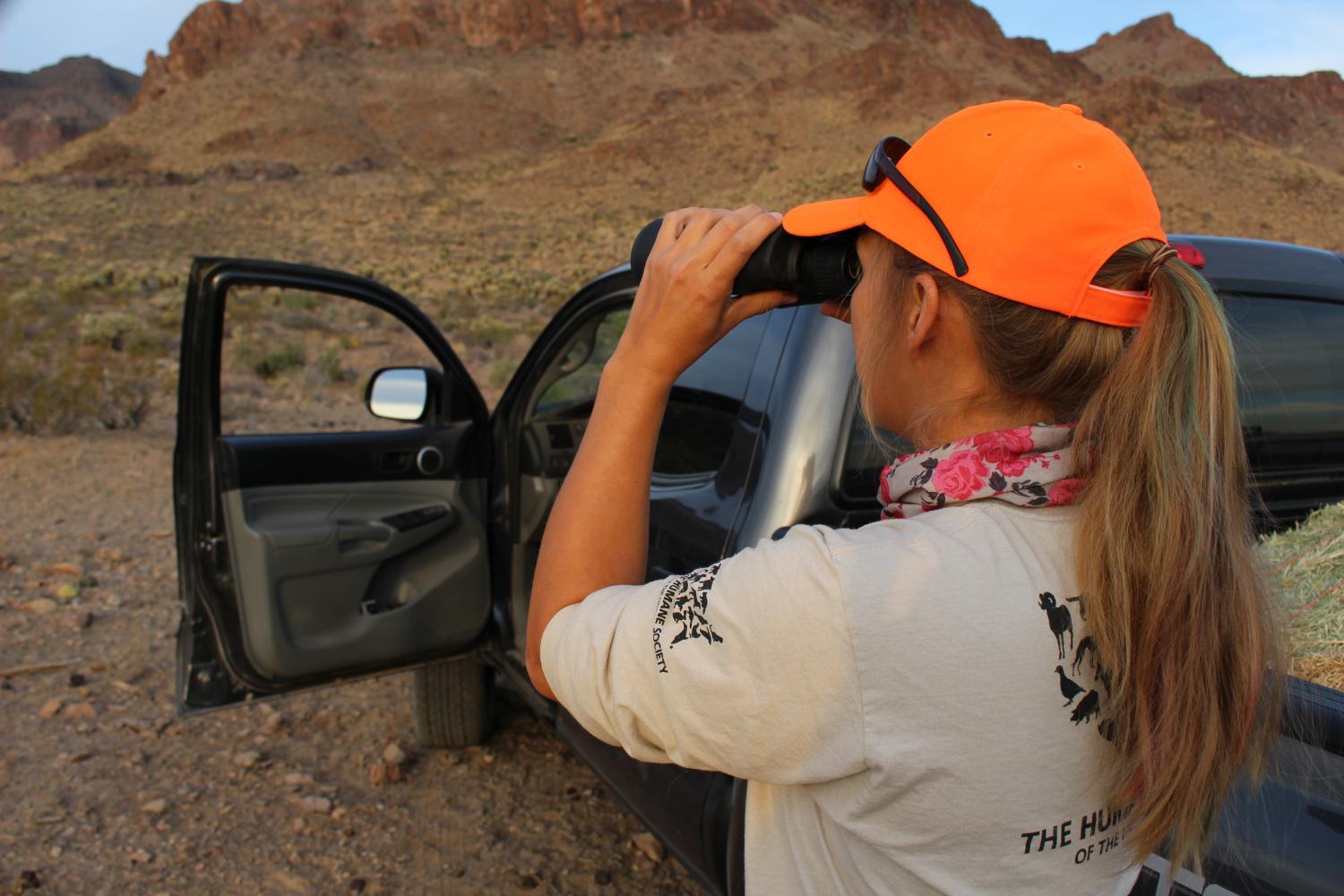 Every day, Kahler, in her gray pickup and hunter-orange baseball cap, looks for burros, sets traps for them and visits a small group waiting for release. She may dart a burro with PZP, but it takes time to get close enough for that.

“Sit. Wait. You know, once they’re comfortable with you, move another ten yards. Maybe ten yards is too much. So now you gotta move back five yards. And then you gotta wait for them to acclimate to you again,” Kahler said.

Her colleague at the Humane Society, Stephanie Boyles Griffin, said, “the important thing is that the animals are accessible enough to dart with a dart projector.”

Griffin is a scientist in the Wildlife Protection Department at the Humane Society. She said PZP works biologically - that’s not up for debate. “What we’re trying to do is actually figure out in a real-life situation how we would use this vaccine.”

The research team, which includes a BLM employee, is trapping and darting only a small chunk of the total burro population in the HMA. They plan to gather less than a 10th of the burros.

PZP has long been mentioned as a solution to the overpopulation problem, but getting a program going costs money.

“Just like an addict can’t afford to go to rehab because they’re spending all their money on drugs, the BLM can’t afford to get serious about PZP because it’s spending all its money rounding up horses,” said David Philipps, author of the recent book “Wild Horse Country.” In his book, Philipps urges the BLM to consider using mountain lions as a means of horse control.

John Hall, the BLM’s lead in Arizona working on wild horses and burros, said he has less and less money and staff each year to do field work or start a long-term research project.

The Humane Society study is an opportunity to get the information they need about how a birth control program would work at the Black Mountain HMA.

“Obviously, if we get favorable results, then our state leadership here will absolutely support us in trying to move forward with some sort of program,” he said.

As for what kind of support officials in Washington, D.C. would put behind a burro PZP program, Hall said, “it’s always hard to say.”

There are six wild horse herds in other states whose population is darted with PZP. Volunteer groups do a lot of the tracking and darting (with BLM oversight and training). However, these horses roam in smaller herds and are more accustomed to humans.

In Arizona, the Salt River Wild Horse Management Group (SRWHMG) wants permission to dart horses in the Tonto National Forest. Those horses are controlled by the U.S. Forest Service, a different federal agency. SRWHMG President Simone Netherlands said they’re waiting on an agreement with the state Agriculture Department and the Forest Service to start a PZP program.

“We know their hangouts. We know each and every mare,” she said. “And we can simply just click on our app as soon as we have been successful in darting that mare so we know that mare’s already had PZP.”

“My mom likes burros,” she said. “My mom’s Catholic and burros are what carried Mary.” The Bible says burros carried Mary, Jesus’ mother, from Nazareth to Bethlehem. Kahler pointed to a burro with a dark cross on her back. “You know, God blessed them with the cross on their back as a thank you.”

By being in this study, these burros may help wildlife managers preserve the ecosystem and reduce animal round-ups. That’s not carrying Jesus’ mother, but it’s no small thing.