Download mp3 (17.94 MB)
This is a collaboration between KJZZ and the Arizona Center for Investigative Reporting (AZCIR). 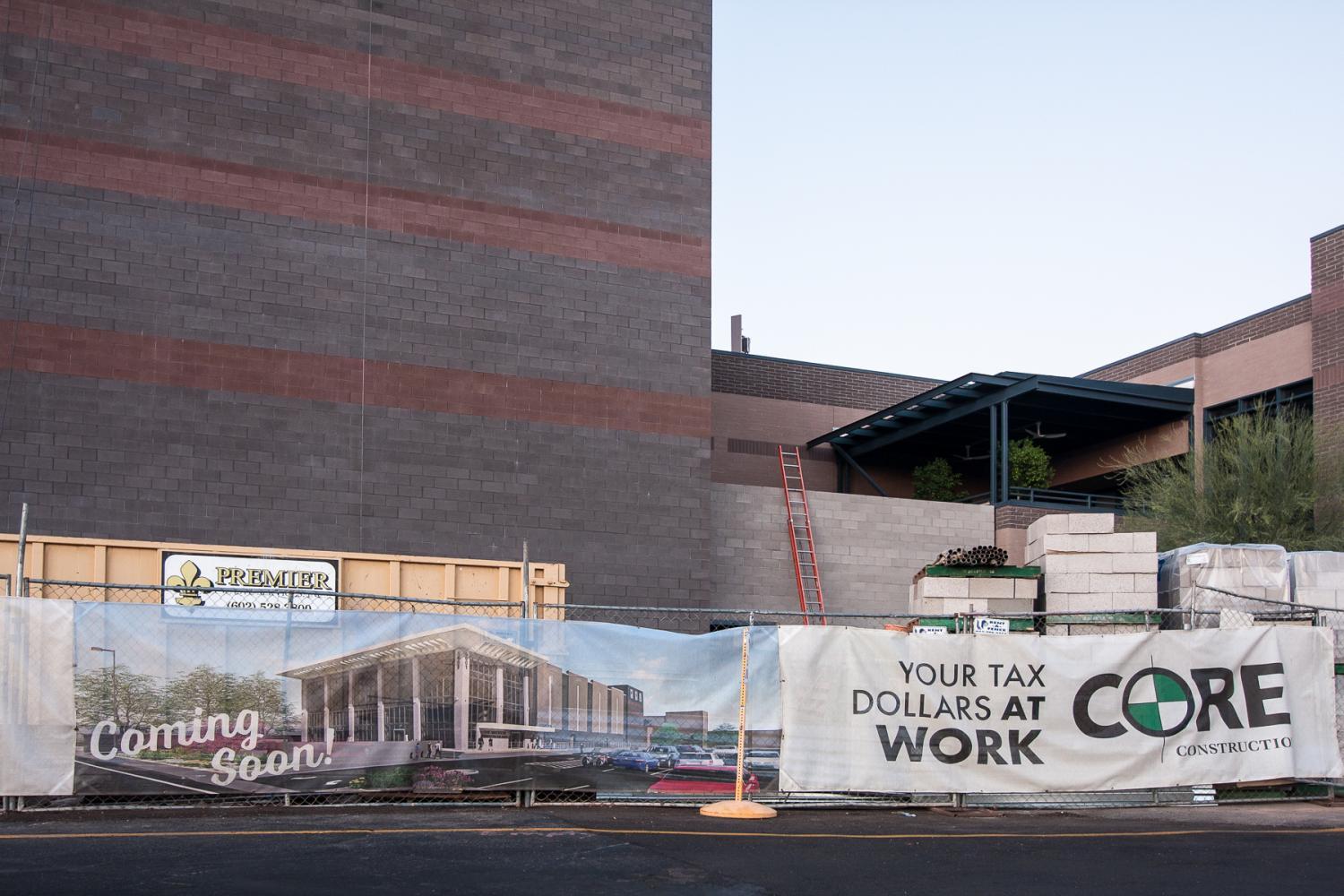 Evan Wyloge/AZCIR
According to procurement records compiled by AZBEX, between 2013 and 2016, a group of three architects, three construction firms and three subcontractors ended up winning contracts for more than half of all K-12 projects.

Last May, four school districts and several education advocacy groups called a press conference at Landmark Elementary school in Glendale to announced they were suing the state. Their problem? State funding for capital needs. Their attorney, Tim Hogan, argued it’s far from enough, and that’s leading too many districts to rely on local tax initiatives just to make repairs.

This capital needs funding issue isn’t new here in Arizona. In fact, Hogan won a similar lawsuit in 1994. At that time the Arizona Supreme Court ruled that funding capital improvements through local tax payers is unconstitutional because it creates a system of rich and poor districts.

The state responded, in part, by creating an agency called the Arizona School Facilities Board (SFB) to ensure funding would be available to any school district.

"We’ve built more than 300 schools since our inception in 1999," said Kerry Campbell, the agency’s deputy director of operations. She explained the SFB is charged with giving money to schools for things like building needs and even books. "The School Facilities Board wants to do what we can to help the school districts that need our help. We offer technical expertise. We have funding available."

The key phrase being “do what we can”. The SFB’s funding levels have dropped in recent years, going from a high of $930 million in 2003 to about $300 million today. So what the agency can do and for how many schools is limited.

At the same time, schools have increasingly turned to bonds and overrides to cover basics needs, like replacing an aging school bus fleet. Across the state the passage rate for school bond and override initiatives has been on the rise. In fact this year, Maricopa County voters approved every bond and override proposed by from the county’s school districts for the first time in recent history.

MORE: Breaking Down The Basics Of School Bonds And Overrides In Arizona

"K-12 is, by far, the most active entities that have bonds," said Rebekah Morris, a construction engineer and owner of the Arizona Builders Exchange (AZBEX). Her company collects and compiles public procurement data for the group's trade publication, which is sold to design and construction firms. "A city might have a bond every 10 years or so," she said.

Morris said the K-12 sector is different when it comes to procurement. In addition to the frequency that districts go to voters for funding, "There’s a very few number of people actually getting work in this space," she added.

Meaning there’s a lot of repeat business between Arizona districts and vendors. According to public procurement records compiled by Morris and the Arizona Builders Exchange, between 2013 and 2016, a group of three architects, three construction firms and three subcontractors ended up being part of more than half of all K-12 projects.

In stark comparison, during that same period, Arizona State University contracted with repeat vendors only about 20 percent of the time. In fact, all three state universities, the state’s largest community college districts and several cities all show less concentration of projects going to repeat vendors.

It’s worth mentioning that AZBEX only tracks contracts made using public procurement practices, meaning somewhere around half of all procurements.

KJZZ and AZCIR spoke with dozens of sources to try to find out more about what could be leading to this type of pattern, including the Arizona School Facilities Board. They have a bird’s-eye view of this process because they review all public K-12 capital improvement projects to ensure they meet minimum state quality standards. For executive director of operations, Kerry Campbell, there’s no simple answer to this question.

She explained schools are working with limited budgets and rely on companies they know can get the job done well. Working on a campus with kids also brings unique challenges. But Campbell added, "We hear rumors and stories about certain parts of the state that are run by the good old boys club."

In the Scottsdale Unified School District, a group of parents and activists believe pre-existing relationships were at play when the district began working on a plan for significant renovations to their schools. Records obtained by KJZZ and AZCIR suggest officials with the Scottsdale Unified School District had plans to hire architecture firm Hunt & Caraway before the official procurement process got underway. SUSD has hired outside counsel to determine whether procurement laws were properly followed, and investigators from the Arizona Attorney General’s Office have also begun a civil and criminal investigation.

Part I: K-12 Districts Outpace Other State Agencies In Repeat Use Of Vendors For Large Capital Needs

Arizona Center for Investigative Reporting analyzed four years’ worth of campaign finance records from K-12 bond and override elections in Maricopa County and noticed a few new patterns including significant bond campaign contributions from the same companies who bid on — and, in many cases, won contracts for — the jobs the funding pays for.

From 2013-2016, bond and override committees in Maricopa County received at least half of their funding from types of vendors. For some districts those numbers are even higher. Take the Saddle Mountain Unified School District near Tonopah, for example. Their 2013 bond committee got more than 99 percent of their funding from those vendor categories. The district’s 2014  override election was similar, coming in at about 96 percent.

But numbers only tell part of the story. To find out more, we started asking questions.

We spoke to Kimberly Moran, the treasurer for Continue the Quality, which campaigns for three West Valley school districts. Of the $122,000 her committee raised for elections in 2014, 2015 and 2016, $92,000 came from potential vendors. More than half of that came from three architects and three construction firms.

“It’s no secret that it’s the folks that are going to actually be making money potentially off the contracting portion of this that contribute to the campaign,” said Moran.

She said a $10,000 campaign contribution isn’t going to buy you a contract, but said, “I guess maybe if there was a new company that was up and coming that would be definitely a way to start relationships in the district."

Mitzi Epstein, a state legislator and co-founder of Yes Public Ed, a committee that ran campaigns for the Kyrene School District’s ballot initiatives, said the setup is a less than ideal situation.

“That in order to build a school we have to reach out to the vendors who might be building the school to pass the bonds to pay those same vendors or different vendors,” she said.

Epstein added she can see how quid pro quo could be inferred from this pattern but stressed that the state mandated procurement process, which, in most cases, involves a committee review and a ratings based selection process, would prevent that.

But when we asked a cross section of architecture firms, contractors and subcontractors that do a lot of work in the K-12 sector here, they say their motives are simple: to support public education because state isn’t providing adequate funding.

“It’s important to me to help kids,” said Barry Chasse, owner of the Chasse Building Team.

Pam Leffelman, with DLR Group architects said, “Our fellow architects are, as I believe, really dedicated to helping future kids.”

When we asked these companies why they carried so much of the campaign finance burden for school bond and override committees, they told us that helping schools get the funding they need is just the right thing to do.

“That’s what we believe is right is supporting our public school system,” said Natalie Orne, a business development director with CORE Construction.

For some districts the support goes beyond campaign financing. Several leaders and employees of these potential vendors are also active participants on school foundations, which are separate nonprofits that raise money for a particular school. Orne, for example is the president of the Queen Creek Schools Education Foundation. Architecture firm Orcutt Winslow also has a tie to that foundation. Vispi Karanjia, a managing partner with the company, is the foundation’s vice president.

“I think in the overall scheme of things at Orcutt Winslow it balances out,” said Karanjia. “We don’t just support districts who only have construction bonds going up. Our resources are limited but we try to help out as many as we can.”

Some campaign support we can’t track as easily. In 2012 and 2013, a group called the Coalition for Educational Excellence raised about $449,000 and donated it to a variety of bond and override committees. Because it’s a 501(c)(4), the group isn’t required to disclose the source of their funds. That fact often earns 501(c)(4)’s that spend money in elections the moniker “dark money” groups.

Cathy Elliott, the former treasurer for the group, told us the money came from vendors who work with the districts. During an on-the-record interview that was not recorded she also said the group was established to keep secret the fact that it was architects, contractors and subcontractors putting money toward helping the bond and override elections pass.

Public K-12 districts award more repeat business contracts than other public entities in the state, a pattern Dean Howard — who worked in public procurement for Goodyear and Phoenix and now works for a large electrical engineering firm — said he knows well. He added his company wouldn’t even attempt to secure school projects.

“There are a lot of discussions about, well, there’s only two or three maybe four general contractors that are getting all that work,” said Howard. “To me, I hear that and I’m like, 'Well, OK, what about subcontractors?' Well, that’s kind of the same deal, and I’m like, 'Well, maybe I just don’t want to mess with that.''” 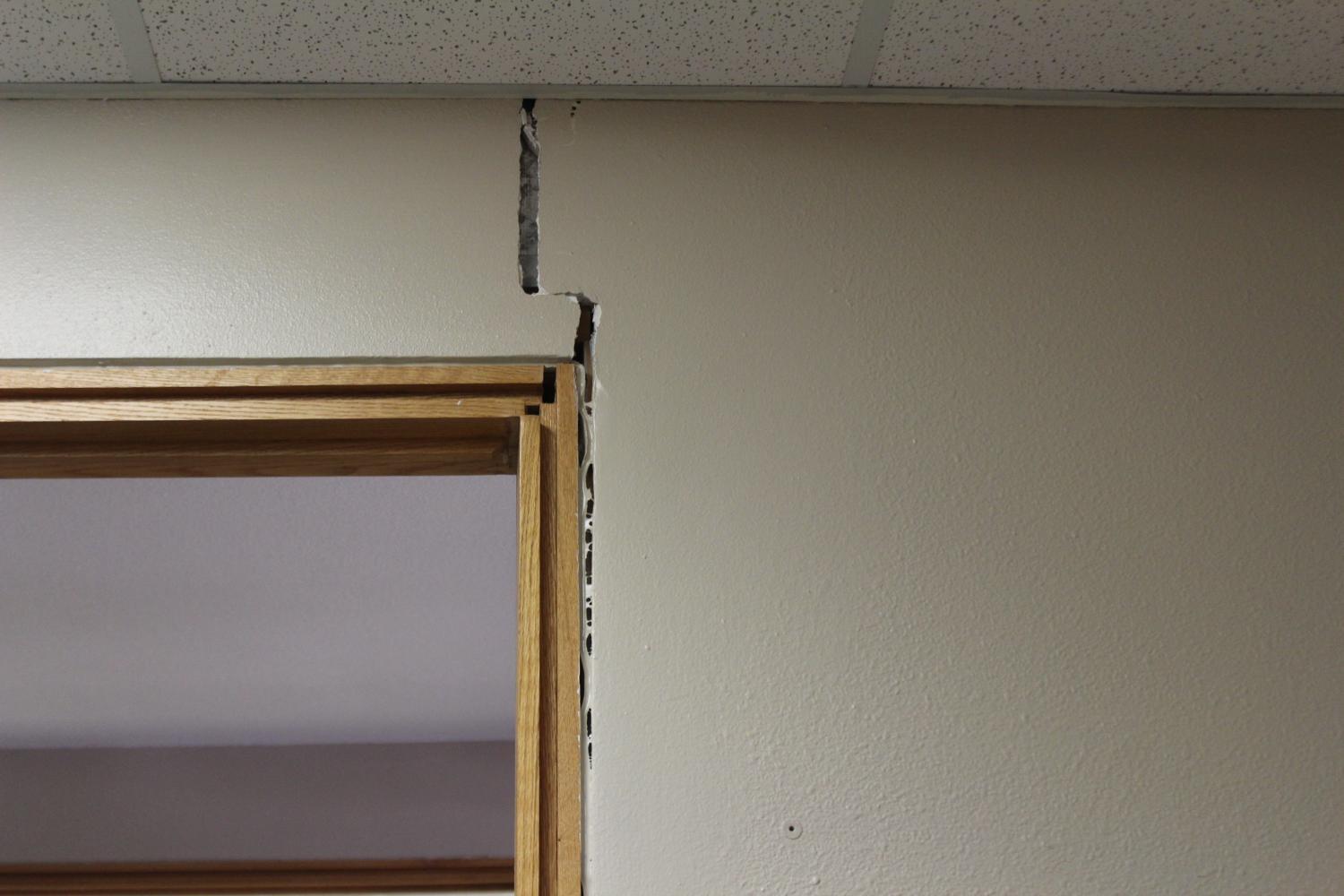 But Laura Felten, the assistant superintendent for business operations at the Paradise Valley School district explained, that pattern has nothing to do with favorites.

“If you’re in a tenuous situation where you have a live campus going on and a very active community, you’re going to be using the people you’ve had success with in the past,” she said.

Michelle Gayles, the chief strategy officer at the Phoenix Union High School district added, “I know the seriousness with which the team at Phoenix Union takes the procurement process,” she said. “So really just focusing on the due diligence of it. And making sure that everything that is a decision is really based on qualifications to do the job.”

The Arizona School Facilities Board has a unique view of this landscape because the agency reviews the contracts for the school building projects they fund and makes sure all other school projects meet minimum quality standards. Kerry Campbell, the SFB’s executive director of operations, said some school districts pick the same vendors over and over again. She explained some are better than others, though she wouldn’t name specifics.

“And some of those that they choose, we have the same problems with every project,” said Campbell. “You know, they don’t follow the documentation process as they should. They’re not as communicative as they could be.”

Campbell said her agency has considered supporting legislation that would add new oversight to the schools’ procurement process following bond and override elections. Right now schools must follow state procurement laws, but there is no central oversight for the process.