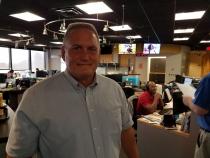 When it comes to selecting municipal judges in Arizona, most of those choices are made by elected officials. Yuma is a notable exception.

There, the people get to vote on who sits on the municipal court bench. Yuma has been electing its judges since it adopted its charter at the turn of the 20th century.

A new report by the Goldwater Institute argues that Yuma’s direct election of judges means they are independent from political influences.

Here to tell us more is the report’s author and Goldwater Institute investigative reporter, Mark Flatten.