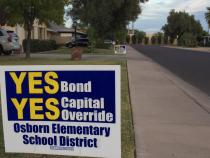 Carrie Jung/KJZZ
A yard sign for an Osborn School District bond in 2017.

It was a good night for Maricopa County school districts with bond and override questions on the ballot. All of the funding initiatives here passed, according to initial results released by the recorder’s office.

And here to tell us about what that means for area school systems is KJZZ’s Education Reporter, Carrie Jung.

Jorge Valencia: So Carrie, first, how much money are we talking about with all of these bond and overrides? And what are districts planning to use it on?

Carrie Jung: Well, we’re talking around half a billion dollars county wide. And the plans for that money can range widely.

One of the biggest asks this election season came from Phoenix Union High School district. Sixty-four percent of voters there passed a $269 million bond. District officials there are planning to use that money to fund needed maintenance and renovation of existing school buildings and technology like a planned expansion of their distance learning capabilities. They also plan to purchase new school buses.

In districts like Kyrene Elementary School District a bond approved there will fund brand new buildings. And voters also approved a measure to continue the district's existing budget override for maintenance and operations, which is funding districts commonly use for things like teacher’s salaries. Officials also plan to use that 15 percent budget boost to support special services like a Kindergarten through third grade reading and math intervention program and speech and hearing services.

Valencia: Were you surprised to see that all 29 bond and override requests were approved by Maricopa county voters last night? How common is that?

Jung: In my experience, it’s pretty unusual to see such unilateral support. If you look at who had these initiatives before voters, it included districts in both affluent and low income neighborhoods, and spanned rural and urban areas too.

But, I should also point out that over the last few election cycles the approval rates for bonds and maintenance and operations overrides has been on a steady increase.

Now, while initial results show that all of these requests passed in Maricopa County, some of the races were pretty tight, especially in the West Valley.

Agua Fria Union’s override passed with just a 2 percent margin. Buckeye Elementary was another close race for its override, just 147 votes separated the yes votes from no’s there.

Valencia: And what about outside of Maricopa County. I know the Tucson Unified School district also had a large bond before voters. How did that proposition fare?

Jung: That’s a great question, and Pima County was a much different picture on election day, with three of the four bond and override requests rejected by voters according to initial results.

Tucson Unified was hoping to pass a $180 million bond. That failed with 59 percent of district voters there saying no to the request. Marana Unified’s $2 dollar bond was also voted down.

The one victory came from Flowing Wells Unified School District in the north Tucson area. The $24 million bond passed with 61 percent of the vote.