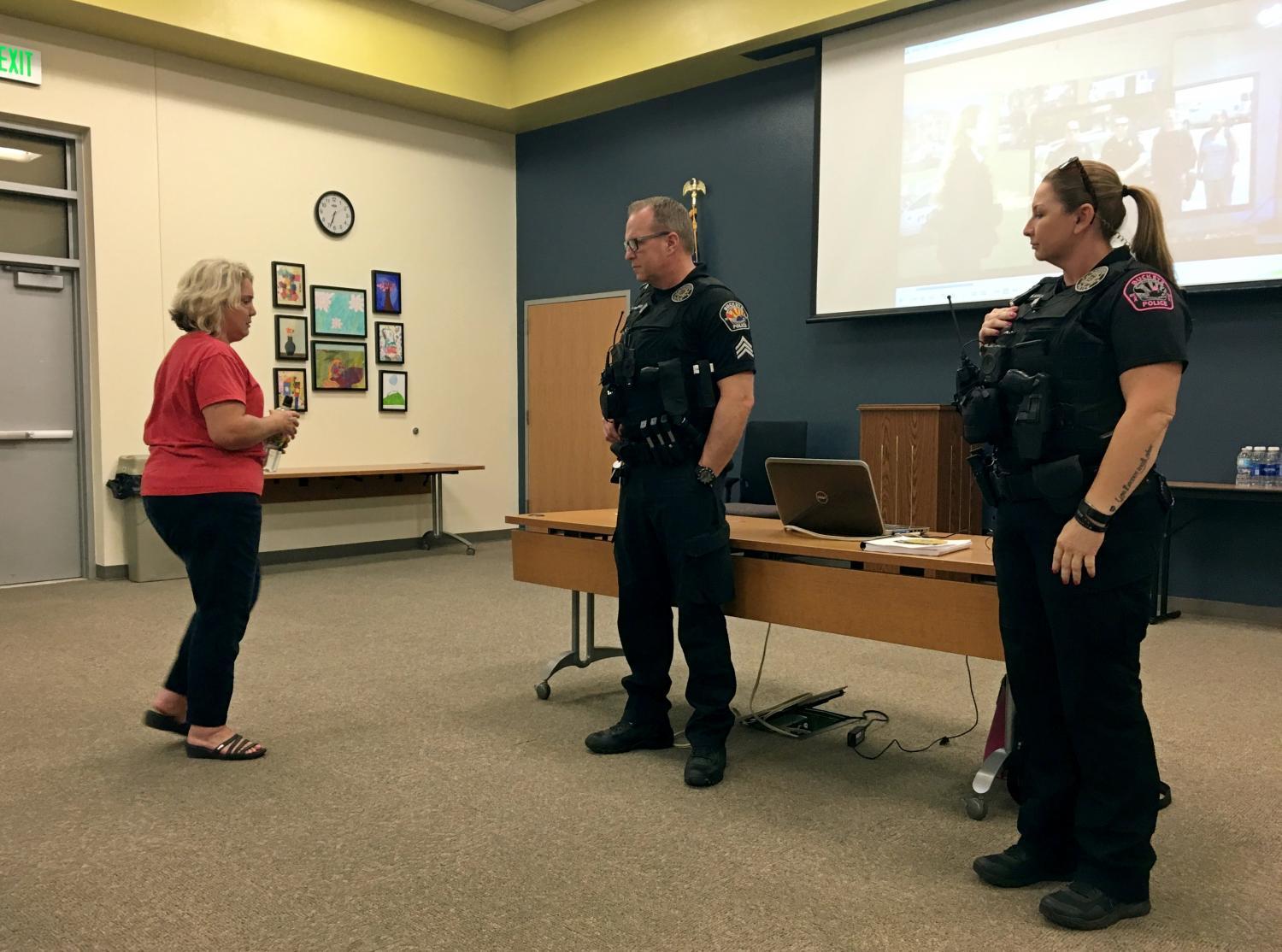 (Photo by Casey Kuhn - KJZZ)
Buckeye police officers work with the Autism Society of Greater Phoenix to learn more about the spectrum.

When it comes to autism, there is no one formula to spot it. There is no list of characteristics that fit the bill each time. And while autism awareness is spreading, there are still places it can reach further, for example, law enforcement. Now one department has turned a misjudged and highly publicized incident into an opportunity to learn.

When a Buckeye police officer saw a 14-year-old boy in a neighborhood park this July, he mistook his behavior, like rubbing his hands, putting them up to his face and pacing, for drug use. What happened after, when the officer fell with the teen and held his arms down was recorded on a body camera video and made national news.

The video doesn’t look or sound good as the autistic boy screams, terrified and the tense officer yells at him to relax and hold still while on the ground.

Buckeye police said the rest of the 20 minute video, which is mostly a back-and-forth conversation between the officer and the teen’s caretaker, isn’t as dramatic, but it shows those involved come to an understanding.

"Not a lot of people want to watch 15 minutes of this," said Larry Hall, Buckeye police chief. "They want to watch the 43 seconds."

In the video, Officer David Grossman speaks with the teen's caretaker.

“It’s called stimming, I’m sorry, if you knew about autism ..." she said, trailing off.

"It’s OK," Grossman said. "And then when I was trying to identify him he tried to run away.”

“Well it’s 'cause you scared him,” she said.

'Stimming' is when a person uses a repetitive behavior to calm themselves, like a stimulation. For this teen, it involved rubbing a string near his face, which the officer mistook as using an inhalant drug.

Listen to an interview with KJZZ's Casey Kuhn on The Show.

The resulting attention and video release turned a spotlight on the small department.

And Chief Hall said the situation could have been better managed.

He said there are challenges when disabled behavior sometimes mirrors drug use.

“But I think as we’re better to delineate the differences, we can become more effective," Hall said. "I think that’s just where we need to spend more time observing before we make contact and be better trained."

Buckeye police department’s investigation of the incident recommended the officer go to a crisis intervention training class, or CIT. The 'T' can also stand for team, in a police department.

Teaching Police And The Autistic Community How To Work Together

At an hours-long event last month, Cynthia MaCluskie with the Autism Society of Greater Phoenix came out to give a presentation to Buckeye residents with autistic children. She explained how to help their kids know what to do in an encounter with the police.

“Let’s make sure our kids have the tools that they know how to interact correctly," MaCluskie said. "Because let’s be honest, the whole Buckeye incident wouldn’t have looked that way if that child had known some of the things we just already talked about.”

The presentation included a video that said not to run away from an officer and to do what police say. Chief Hall was there, along with three other officers.

MaCluskie asked the officers to come to the front and explain what was on their tactical vest, as well as what kind of resources they use when the department gets a mental health crisis call.

She said she wants to keep autistic kids safe, after an incident where an autistic person in another Valley city was shot and killed.

“And of course people always want to demand the police be trained," MaCluskie said. "And that would be great, but I don’t have control over that.”

Hall said his goal is to get all of his 90 officers trained in CIT.

Right now about 20 percent of the department has in-depth training.

But that could get a boost from the newly formed West Valley CIT Coalition, which gives eight departments involved an opportunity for officers to take 40 hour training four times a year.

“The need for training was out there and there wasn’t a lot of training spots available to fill the need that everybody had,” said Iva Rody, with El Mirage Police Department.

Rody helps manage the training and sets the schedule. The training involves lectures and roleplay scenarios where officers learn the best way to deal with someone in a mental health crisis.

The training also brings in people with disabilities, including autism, to share their stories and explain to officers what they might see if they encounter a disabled person.

“And it gives them kind of that base or that core to work from where they can still handle mental health calls and feel like they have the resources to do so,” Rody said.

Laura Usher with the National Alliance on Mental Illness said there are about 3,000 CIT programs across America now, but it needs to be everywhere.

“We still have a long way to go to make sure that every community is served by the right kind of crisis response, but it’s a huge growth over the last 15 years,” Usher said.

Usher said most communities don’t have crisis mental health services easily accessible and so turn to the police. That can lead to forceful encounters like in Buckeye. But with more CIT training, Usher thinks all police can safely identify what to do when meeting someone with a disability.

Buckeye Police Chief Larry Hall is confident the department can turn this incident into a learning opportunity. He sees how policing is changing and wants to keep his officers ready for anything.

“As we get better on the science side we need to take that and learn on the law enforcement side as to how to better and more effectively deal with people with disabilities and that’s important," he said. "The future of law enforcement is going to go that direction too.”

All so incidents like the one this summer can be avoided in the future.