Breaking Down The Basics Of School Bonds And Overrides In Arizona

This year, 39 school districts in Arizona have bond and/or override elections, according to the Arizona Association of School Business Officials. And if you live in the Valley, it’s hard to miss all of their campaign signs. So, why are we seeing so many of them?

Well, to answer that question, we need to back up and talk about where public schools in Arizona can get funding.

"The first is from the state and they get that based on ADM, which is average daily membership," said Stefan Swiat, a spokesman with the Arizona Department of Education. He added, depending on the school, the federal government can also kick in some funding for programs like Title I and free and reduced lunch programs.

But, he said, when schools don’t believe they have enough funding from either of those sources, "That’s when they turn to local initiatives. such as bonds and overrides."

Bond and override elections are very local and vary district by district.

But how do schools determine how much money they need? And what they’re going to spend it on?

"What they do is they have a meeting of the governing board," said Chris Thomas, the associate executive director for the Arizona School Boards Association. "The staff will bring forward an idea and a proposal to discuss the needs the district has." 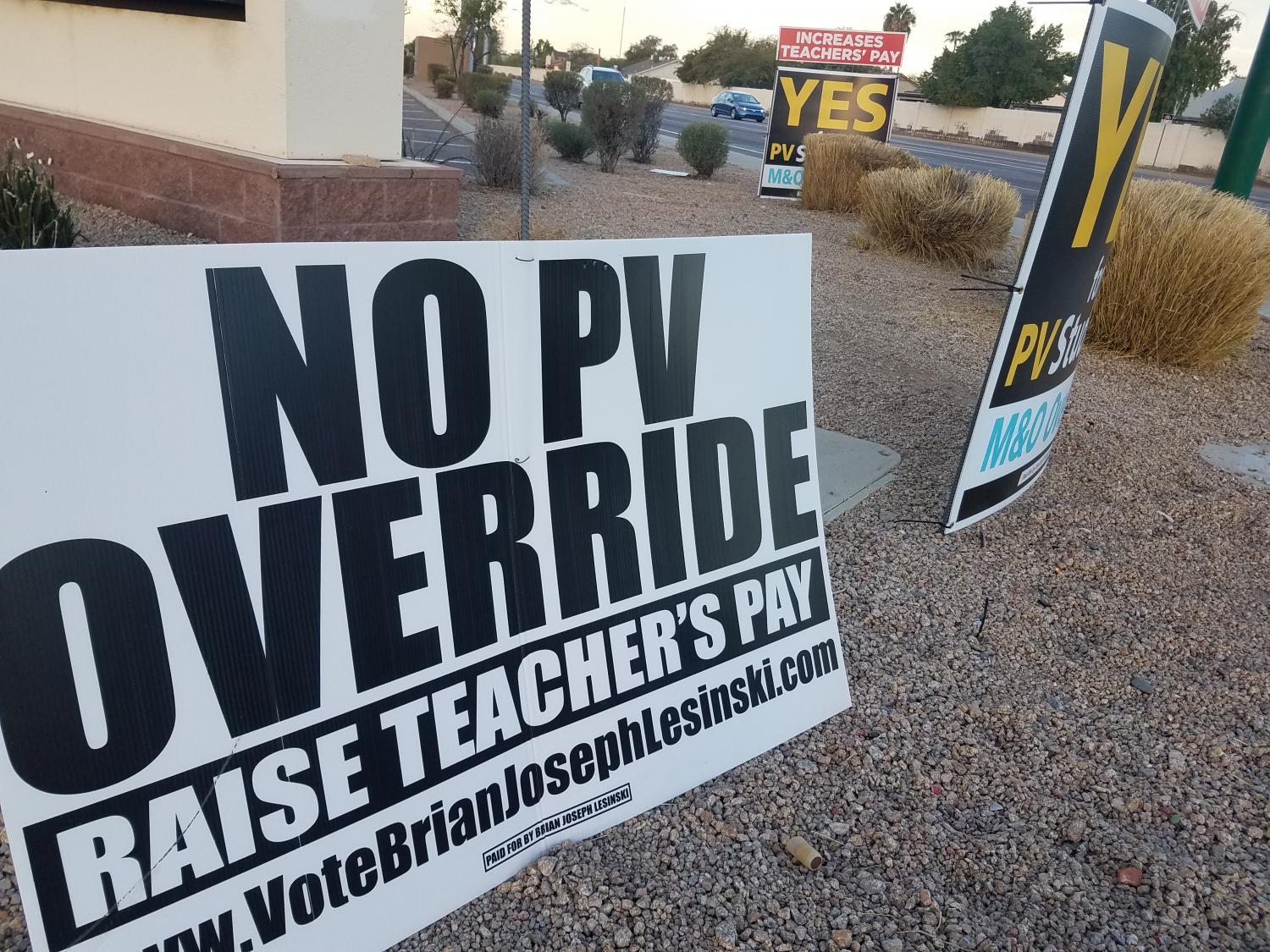 (Photo by Sky Schaudt - KZZ)
This year, 39 school districts in Arizona have bond and/or override elections.

He said if the school board approves, districts will put together a plan of what they intend to use the money for. "And they put together an argument that will go on the ballot pamphlet," Thomas said.

Overrides come in a couple of forms. The most common is for maintenance and operations.

Chuck Essigs with the Arizona Association of School Business Officials explained most overrides dollars are going to pay the salaries and benefits of teachers.

Either way, overrides are a limited source of property tax based funding for districts and they can’t exceed 15 percent of a school’s budget limit.

They’re good for a term of seven years. However, schools will usually go to voters every four or five years to get them renewed, because it’s around that time that funding starts tapering off.

As for bonds, if voters approve the proposal that the district put forward through a local election, that allows the districts to sell bonds to investors. Essigs added there are three major uses for money raised from bonds.

And unlike overrides, the money schools can raise from bond sales is much higher. 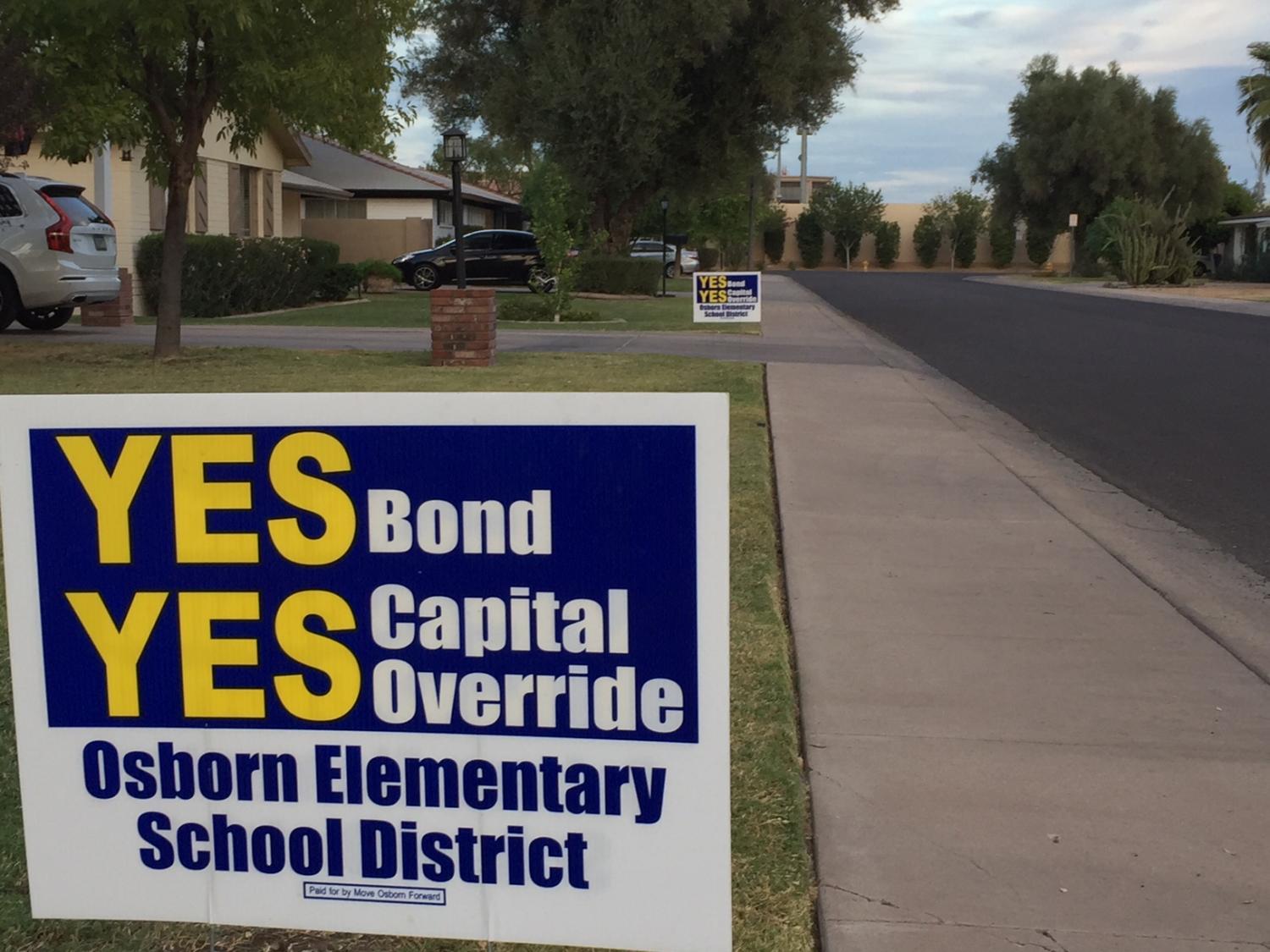 Carrie Jung/KJZZ
A yard sign for an Osborn School District bond in 2017.

According to data calculated by financial services company Stifel for the Arizona Builders Exchange, more than $2 billion in bond money was approved for Arizona schools between 2015 and 2016. And looking at this year, there are four bond questions before voters that are more than $100 million each.

It’s important to note that the schools themselves can’t use public funds to influence the outcome of any election.

So the next question: Where are all of these signs coming from?

"So what you have are parent groups that emerge," Thomas said. "That are separate organizations and basically political action committees that are funded."

And he said those PACs can be funded by a variety of people, from community members to local businesses.

Thomas added, more schools are now using funding mechanisms like bonds and overrides just to make ends meet each year. He argued the funding coming from the state hasn’t been adequate since the great recession.

"I will say that we are concerned about the equity of the situation because not all districts can pass one of these," added Thomas.

Last year the passage rate of bonds and maintenance and operations overrides here in Arizona was around 82 percent. As for this year, well, only election day will tell.