Solar Industry On Edge, Waiting To See If Trump Will Impose Tariffs On Panels 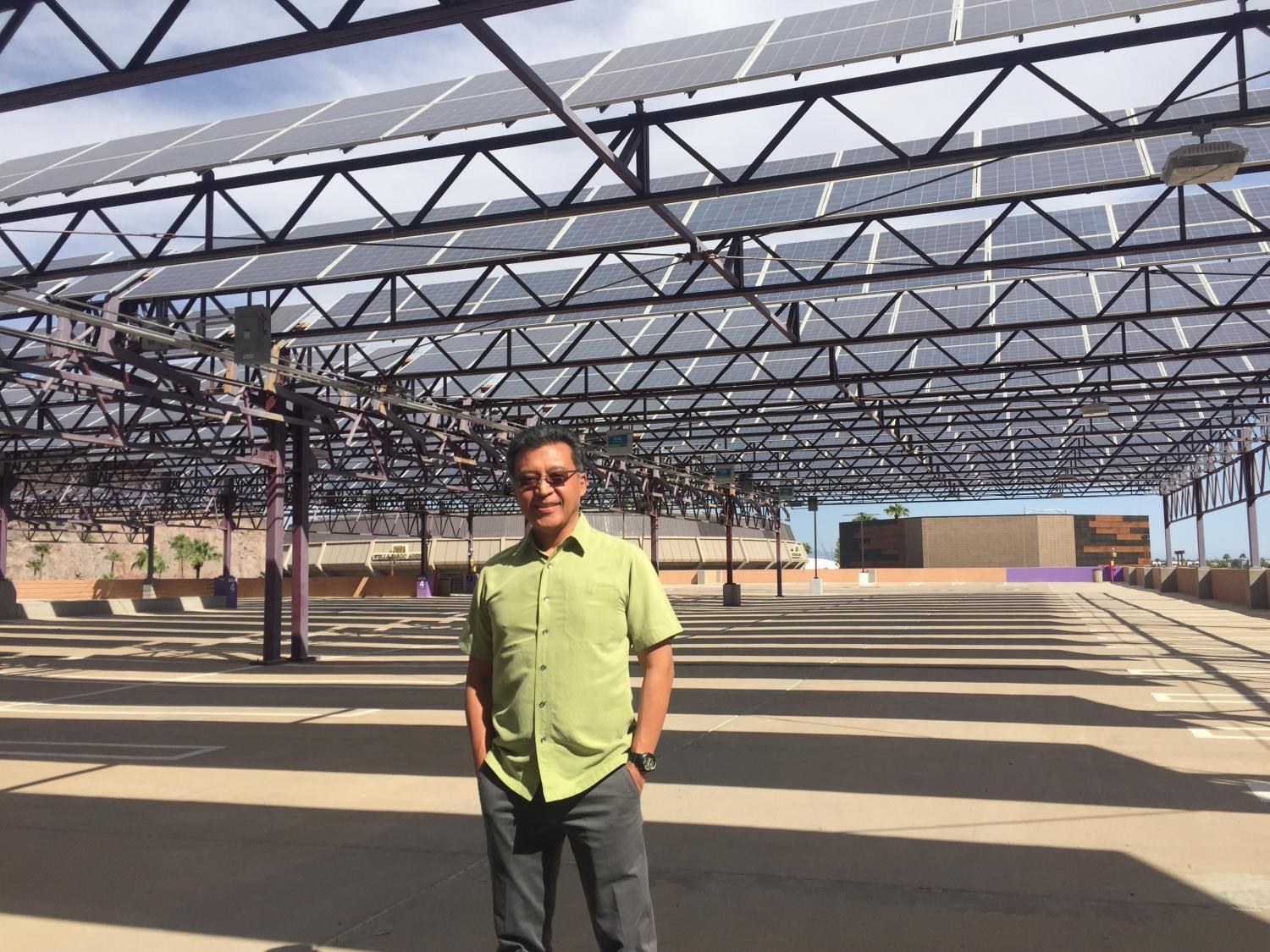 (Photo by Will Stone - KJZZ)
Lee Feliciano, who heads business development at C2 Energy Capital, stands on top of a parking garage laden with solar panels at ASU.

For evidence of just how far solar has come in the past decade, take a drive through the heart of Arizona State University’s campus.

There, across from the football stadium, stands one of Arizona’s first major solar projects mounted on top of what’s known as parking garage number 5.

Every few minutes the panels hum as they tilt slightly, tracing the movements of the afternoon sun.

“At the time, this was the equivalent of all the non-utility solar installed in Arizona,” said Lee Feliciano, who developed this project in 2008, said while standing beneath the rows and rows of panels. He heads business development at C2 Energy Capital.

“Back then, there were basically no investor-owned or private commercial projects,” Feliciano explained.

When this project was built, solar panels came at a premium.

Since then a lot has changed with a “90 percent decline in the price of the solar panels in less than ten years,” Feliciano said.

Solar is now booming across the country, thanks to that steady stream of cheap foreign panels. This kind of commercial solar installation — hooked up to a school or mall — is now commonplace in sun rich states like Arizona.

But a trade dispute has Feliciano and much of industry on edge — waiting to see whether the Trump administration will impose steep tariffs on foreign made solar panels.

Unease over the looming decision is already affecting the market. Feliciano, whose private equity firm invests in solar around the country, said their prospects are now up in the air.

“This tariff could hit us within the next couple months, so there’s that uncertainty right now with almost our entire pipeline," he said.

In fact, the Solar Energy Industries Association has described the proposed tariff as an “existential threat” that could undermine their business model and make solar no longer affordable.

At the center of the dispute are two domestic manufacturers of solar panels, SolarWorld and Suniva. They argue a flood of imports, especially from China, has made it impossible for them to compete.

“Sure, they’re trying to protect their particular U.S manufacturing jobs, but you’d do that at the expense of wiping out thousands of other high-paying jobs,” Feliciano said.

The industry employs about a quarter of a million people, and many of those jobs are tied to installing cheap panels from overseas, especially for the largest facilities, known as utility scale solar. That sector has grown 72 percent each year on average since 2010.

These solar facilities rely on economies of scale and pricing certainty, Lund said, which means doubling the price of panels would make many potential projects no longer cost-effective.

“That’s a completely massive game changing increase and so it’s not something you can just casually plan around,” Lund said.

The fate of such projects — under a tariff — could rest on where they are located.

California and states in the Northeast often have aggressive goals for renewable energy, so utilities will have to keep buying solar even if the price goes up. But states like Texas or Arizona don’t have the same ambitious renewable energy portfolios. Solar needs to compete mostly on price and be cheaper than other forms of energy like natural gas.

“Where the big solar was or was about to be price competitive with other types of electricity it will almost certainly no longer be competitive at all,” Lund said.

But some say those fears are unjustified.

“This case presents no threat to the solar industry as a whole. Solar demand is going to continue to grow. Solar installations will grow,” said attorney Tim Brightbill, who represents SolarWorld, one of the two U.S. makers of panels asking for a trade protection.

Brightbill argues that manufacturers can’t compete with foreign dumping and panels priced well below the cost of production.

Brightbill said a trade protection will actually create jobs, but that’s not what most of the industry believes. They predict it would wipe out far more than manufacturing could possibly generate.

That all depends on what regulators recommend to President Donald Trump — a tariff, a quota or some combination — and then what he ultimately decides to do.

“The president has fairly wide leeway to implement whatever he so desires,” Shayle Kann, head of GTM Research, said. 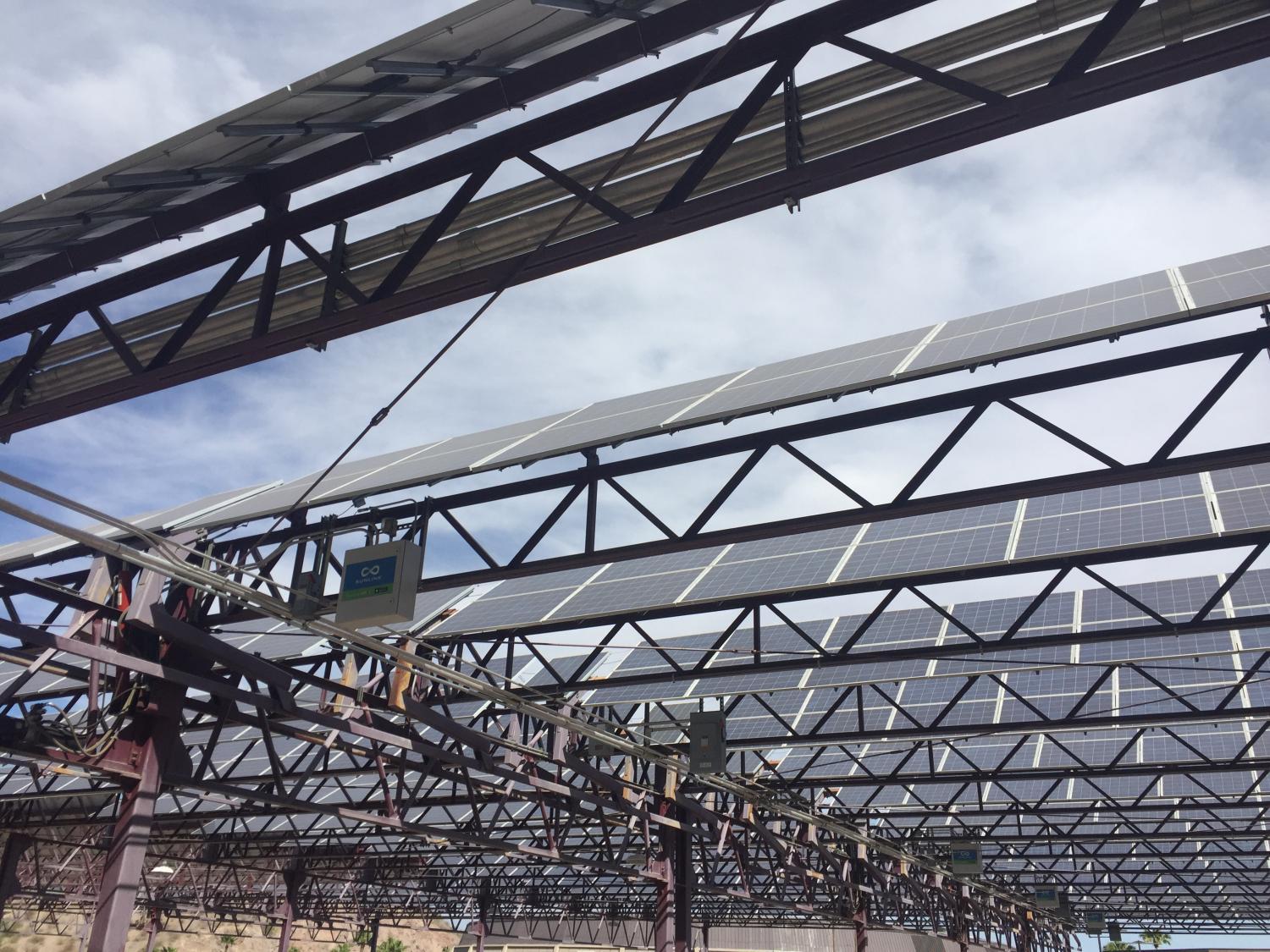 Will Stone/KJZZ
Solar panels on a parking garage at Arizona State University, one of Arizona's first major solar projects.

Since the case began, Kann says the cost of panels has already gone up more than 20 percent in some places as people stock up ahead of any decision. This is particularly disrupting the utility scale solar market, which is just becoming competitive with natural gas. The trade case is now threatening to upend that transition to more renewable energy.

“You see a lot of utility scale solar projects where they can’t confidently bid because they don’t know what the price of the panel is going to be,” Kann said.

Some projects are being canceled “because of the uncertainty around pricing and whether there’s going to be available supply.”

“The market’s just in a state of turmoil and confusion in the meantime,” Kann said.

Given Trump’s tough talk on China and support of tariffs, some worry that turmoil and confusion isn’t going to die down any time soon.