Not Forgotten: Looking For Missing Loved Ones Takes Many Approaches 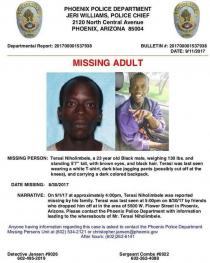 (Photo courtesy of the Phoenix Police Department)
Terasi Niholimbele has been missing since August.

The third-annual Missing in Arizona Day was last Saturday, and in that one day, agencies processed more than 70 missing person reports. That’s triple what they saw last year during the event.

It may seem strange that there’s a designated day to encourage people to file reports. Don’t they report their loved one as missing as soon as it happens?

“A lot of information came to us that families did try reaching out to their local law enforcement agencies to file reports, and for one reason or another, that report was never filed,” said Sgt. Vince Lewis with Phoenix Police Department.

He added there are also people who have been afraid to come forward — if they’re undocumented, for example. He said officials will not use that status against a family who is searching for a missing person.

Losing someone this way is not something you’d expect to happen. It can be confusing to know what to do, even beyond the police report.

In the first hour, you ask yourself, "Why is it taking them so long to come home?"

"Why won’t they answer my calls? Are they mad about something?"

In five hours, you ask your family and friends, "Have you seen them? Have you heard anything? Were they with you?"

In 24 hours, you’re being asked the questions, "How tall are they? What were they wearing? Where were they going? Do they take any meds? Do you have their dental records?"

And after that, there’s just one question, "Where are they?"

“He was supposed to be back in like 30 minutes,” said Aline Sibomana of her little brother, Terasi Niholimbele.

He has been missing for almost two months. He’s 23. He’s African, with brown eyes and black hair. He was wearing a white T-shirt.

“It just takes one person recognizing his face,” Aline Sibomana. “Because he has a unique face. It’s hard to miss. You know, and his smile is very goofy.”

As she said this, she was looking at a missing person poster for Niholimbele. In one of the photos he’s smiling in the driver’s seat of a car in a bright purple jacket. Sibomana and Niholimbele are two of nine children. The family escaped Burundi during a genocide in the early 1990s.

“My mom was eight months pregnant with him. She gave birth to him in the middle of a field in Tanzania,” she said. “He survived living in a refugee camp with no medical care, no services. And then to come here, and go missing …”

More than 600,000 people go missing in the United States each year, though even more cases could be unreported. Last year, more than 30 percent of reported missing people were Black, when Black people make up less than 15 percent of the total U.S. population.

Sibomana said she had some concerns at first about how seriously local law enforcement would take the case. But those have gone away; she said the detective assigned to their case has gone above and beyond to help and keep in touch.

“For us to know that the officials working on our brother’s case care, and that we’re not in this alone also helps. I think it would be so much worse if we weren’t getting calls back,” Sibomana said.

At the Missing in Arizona Day event this year, more than 70 names were added to the 2,000 already reported missing in Arizona. At the same time, there are 1,500 unidentified bodies in the Arizona medical examiner’s office. Some of these new reports could be a link.

Dan Merena is a forensic scientist at the state’s crime lab, and he was at the event to tell people how to give DNA samples, and why that’s so important.

“The more family samples that are given, the greater the chance of identifying an unidentified person,” Merena said.

Sibomana’s family did that, too. But she’s not the type to wait for answers.

“We did some canvassing around the 55th Avenue and Osborn area ... that’s the area where he went missing,” Aline said.

They’ve printed thousands of Niholimbele’s missing-person posters — in English and Spanish — to hand out and post.

“Just like if I’m going anywhere, I give people a poster like hey, my brother’s missing,” Sibomana said.

And there’s a Facebook page. The groundwork is spurring a response. Sibomana gets messages and calls sometimes from people who think they’ve seen Niholimbele. And then Sibomana will pass the message along to the detective.

“No matter what, Terasi will not be forgotten. We will raise hell to find Terasi,” she said.

What they find may not be what they’re hoping for, but Sibomana said at this point, they just want an answer.

“If we know that my brother’s passed away and we have a body to bury, we can process that,” she said. “The worst thing about this whole entire situation is there’s no closure. Like, how do you move on? You can’t. You cry at night. You pray that he ate. You pray that he’s alive.”

And you keep handing out flyers and posting on social media — and saying his name to anyone you meet, however long it takes to get an answer.