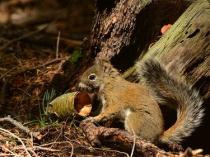 Over the summer, the Frye Fire charred more than 48,000 acres in southeastern Arizona, destroying nearly half of the small yet crucial habitat that hosts Arizona’s endangered Mount Graham red squirrel.

An annual survey estimated that the endangered species dropped from 252 squirrels to about 35 over the past year.

James Driscoll with the Arizona Game and Fish Department said the squirrels are just one of many local species that face habitat degradation.

“You’re going from an animal that might have a forest habitat niche, down to something that now looks like a moonscape. Yeah, there’s going to be effects to the wildlife in the habitat from the game species to the non-game species,” Driscoll said.

Driscoll said other environmental concerns like climate change and drought have already impacted the habitats of many other Arizona-native animals.