Download mp3 (1.91 MB)
(Photo by Jimmy Jenkins)
Jeffrey Sanders returned to the Tent City Jail several times for violating probation. He finally stayed out of jail with the help of a mentoring program and now helps other inmates transition back into society. 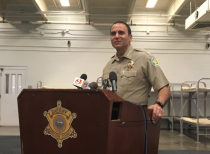 Jeffrey Sanders blinked his eyes as he looked around the Day Room of the former Tent City Jail.

“This used to be my house for a very long time,” Sanders said. He spent about 16 months in the tents. The Day Room was where inmates could shower and seek refuge from the elements, so returning to the jail wasn’t all negative. “I was here for all seasons. Coming in here is a really pleasant flashback.”

Sanders now works with MARC community resources to help inmates transition back into society successfully. He said fighting recidivism is a challenge he knows well. “I kept violating probation, so I had to come back,” Sanders said about his time in the tents.

But Sanders was happy to return on Friday as Sheriff Paul Penzone announced the space would become the home of an expanded drug treatment program in the Maricopa County Jails.

“This is a good day,” Penzone said as he stood in the center of the renovated Day Room facility. He said the space was “quite frankly, unproductive, at best.”

Penzone had called Tent City costly and inefficient, and closed the site in May 2017.

With $170,000 in renovations from the Jail Enhancement Fund, Penzone said the county is attempting to “turn it into something that could be productive.”

Penzone said the building would become the new home for MOSAIC, a substance abuse program for inmates that MCSO piloted in January. “So far it has shown great results,” Penzone said, “in addressing one of the most trying issues in our society today which is drug addiction, more specifically the opioid epidemic.”

“For anyone out there that has had a loved one that has made bad decisions and become a drug addict that has then led to other criminal behavior, you understand the importance of investing to help those in need — not carry them — but provide an opportunity for them to find a path back to wellness.”

Penzone said the new space will allow the MOSAIC program to expand from 500 to 800 inmates annually. He said no additional staff was needed to handle the expansion.

Inmates are chosen from the general population for MOSAIC based on their assessed risk of substance abuse and recidivism.

Metal bunks now line the walls of the space so that inmates who are selected for the program can live together and support one another. An adjoining classroom is where behavioral health staff will work with inmates who are considered medium to high risk for offending again.

Dr. Dawn Noggle is the mental health director for Correctional Health Services. She’s been overseeing the MOSAIC program, which is currently administered in two separate MCSO jails. “What we have now is a space that is dedicated,” Noggle said. “The value isn’t just that they are sequestered from other people that are in jail. It’s that we can now create a space — they can create a space — where they can create a connection.”

Noggle said she has learned by working with substance abuse patients that connection with peers is often the answer to beating addiction.

She says the MOSAIC programming involves dealing with past trauma and developing coping skills. “When they’re in a safe space like this, then they have the ability to open up a bit,” she said.

After a week of evaluation, inmates goes through six weeks of regimented schedules, intensive courses as well as group and individual therapy.

Noggle said it’s too early to give specific numbers, but she believes the MOSAIC programming is decreasing recidivism numbers. She said it would take two years to develop more concrete data.

Jeffrey Sanders said it was a similar treatment-focused support group that finally helped him break the cycle of returning to jail.

“Being to a recovery community for support and having a mentor — that is the only way it happened for me and this is seemingly designed on that model,” Sanders said.

Sheriff Penzone said the first inmates will begin treatment at the facility within 30 to 45 days.