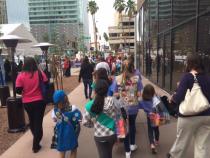 After the Boy Scouts of America announced plans to allow girls into the organization, the Girl Scouts responded by saying it will continue business as usual.

Boy Scouts directors say the decision was unanimous to let girls into the Cub Scouts program.

Arizona’s Grand Canyon Council of Boy Scouts said they now hope to engage entire families and do not look to detract from the Girl Scouts’ programs.

“We’ve had a number of issues over the years where we have been able to serve boys and parents could come and get involved, but we did not have a way to serve the entire family because girls were excluded,” said Larry Abbott, Scout Executive and CEO of the Grand Canyon Council.

Susan de Queljoe with the Arizona Girl Scouts says she finds the announcement ironic that it coincided with the International Day of the Girl.

“We know what girls need. They need an all-girl, girl-led, girl-friendly environment and that’s the program that we really offer girls," de Queljoe said.

After raising more than a million dollars for girls on Tuesday, de Queljoe said the Girl Scouts are not worried about the Boy Scout’s decision.