As Mexico’s Elder Population Grows, So Do Concerns About Dementia 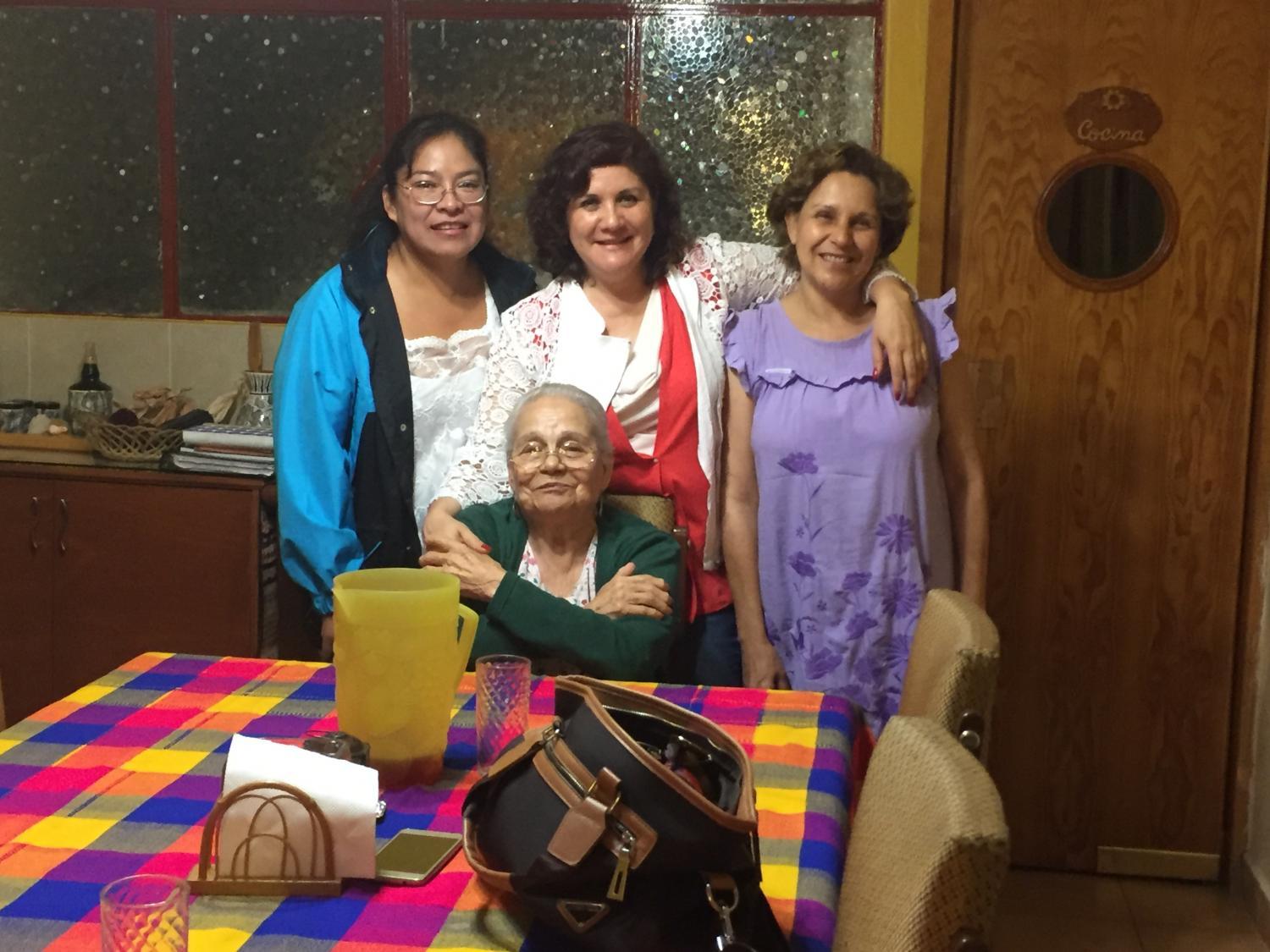 Arizona has long been a destination for older adults, with its pristine retirement communities and warm climate. But aging in America isn't what it used to be. The issue isn’t going away. We have to talk about it. This is Part IV of "The State of Aging in the Valley," a series that explores the reality of an aging society.

MEXICO CITY — One of the last memories I have from my grandmother is of her singing. She had Alzheimer’s disease when she passed.

For years, we tried to face and understand the disease that slowly and painfully ate her notion of space and time, her life and her memories. Such stories repeat over and over in Mexico City — and those cases might dramatically increase in the near future.

Mexico has a reputation for being a young country, but the demographics are quickly changing. An exponential increase of the elder population will likely result in more people suffering from dementia. In Mexico City alone, official forecasts predict that by 2030 there will be more people over the age of 60 than kids 15 or younger.

“The cultural and social changes are also taking place in Mexico, so they will face the same problems like in the U.S.,” said Regina Altena, director of Alzheimer México, one of the only two specialized day care centers for dementia in Mexico City.

According to her data, Mexico City has about 70,000 inhabitants suffering dementia, but the number could increase to 3.7 million by 2050.

And Altena considered that the lack of resources in Mexico to help dementia patients, combined with the country’s family-driven culture, are already contributing to make the problem grow.

María Antonieta Fernández — Toñita, as people call her — lives in a middle class neighborhood in Mexico City. She is 86-years-old and has Alzheimer’s. Two of her daughters take care of her at the same place where they grew up.

The day I met Toñita, she surprised everyone as she greeted me. She told me she felt very good despite one of the main effects of her sickness is the loss of language.

Reyna Osuna is Toñita’s youngest daughter. She showed me the black and white photo of her mom when she was young. Toñita was beautiful and an aspiring actress back then. 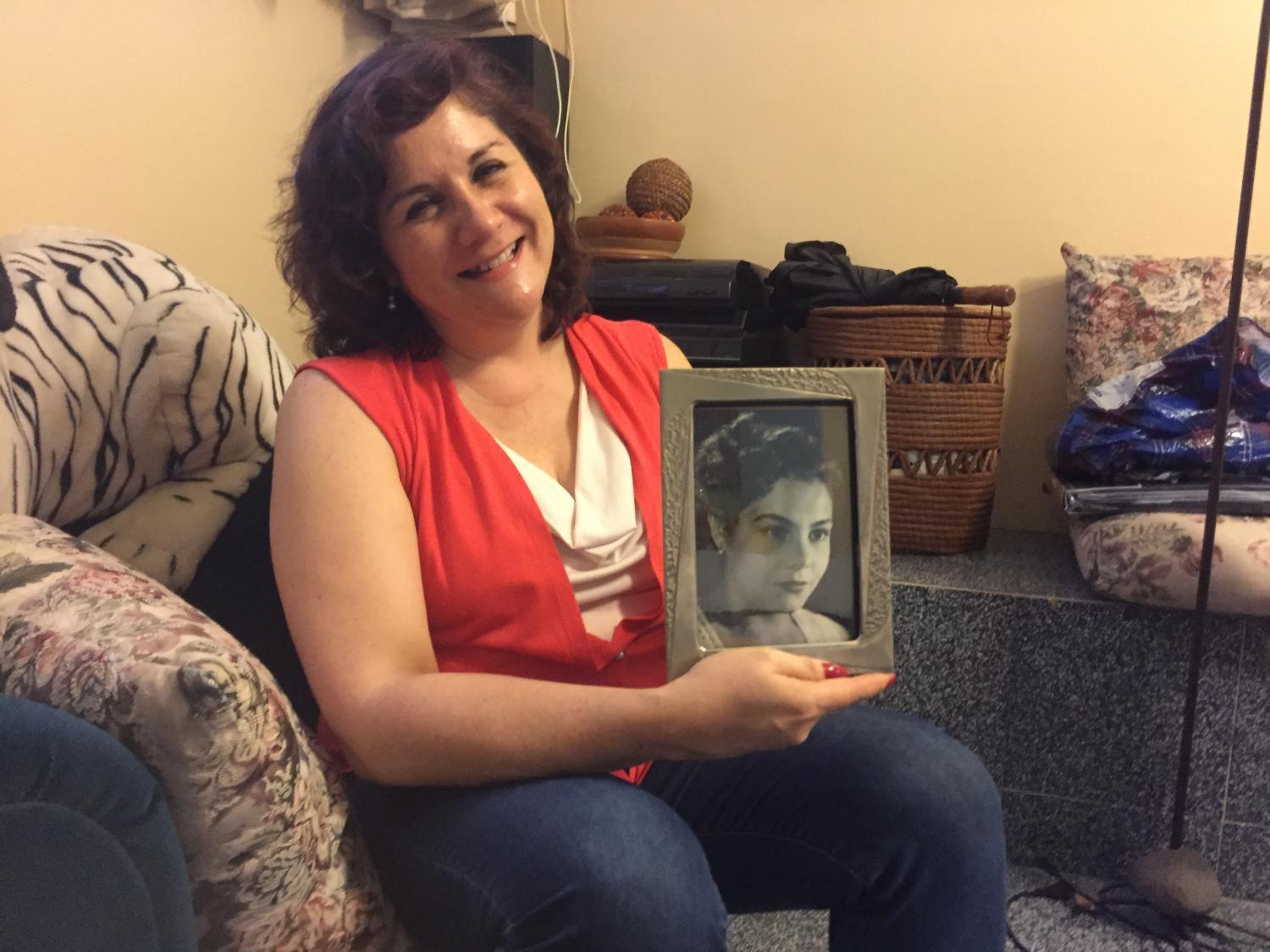 (Photo by Rodrigo Cervantes - KJZZ)
Reyna Osuna with a photo of her mom, María “Toñita" Antonieta Fernández, when she was a young, aspiring actress.

“It’s very hard to find someone who can take care of my mom, particularly someone trustworthy and considering that my mommy can’t speak anymore,” Reyna said.

For Reyna, Alzheimer's is a terrible disease. She wasn’t afraid of growing old, until the moment she had to face her mom’s sickness.

The situation in Mexico is complicated culturally, as families are expected to take care of the elder and dementia is reduced to “something normal when you grow old,” she said.

Reyna doesn’t think Mexico is prepared for the upcoming demographic changes, and neither does her older sister, Marisa Osuna.

Marisa said her mom was her best friend — until Alzheimer changed her. Toñita was very active. She was an amazing cook and with tons of things to do all the time.

“I feel like I lost my mom through this illness. At first, it was horrible because you don’t want to accept it; then it gives you a lot of sorrow — I spent many nights crying — and then it makes you feel angry, and finally powerless,” said Marisa, Toñita’s oldest daughter.

Marisa thinks Mexico City needs more resources spent on education and other programs that could allow the elder to become more active and less dependent on their families, who are the typical caregivers here.

“Mexico has all the resources needed, but government corruption is so big, that it makes them unreachable to the population,” said Marisa.

For her, the government embraces a culture where the newer generations are expected to take care of seniors. 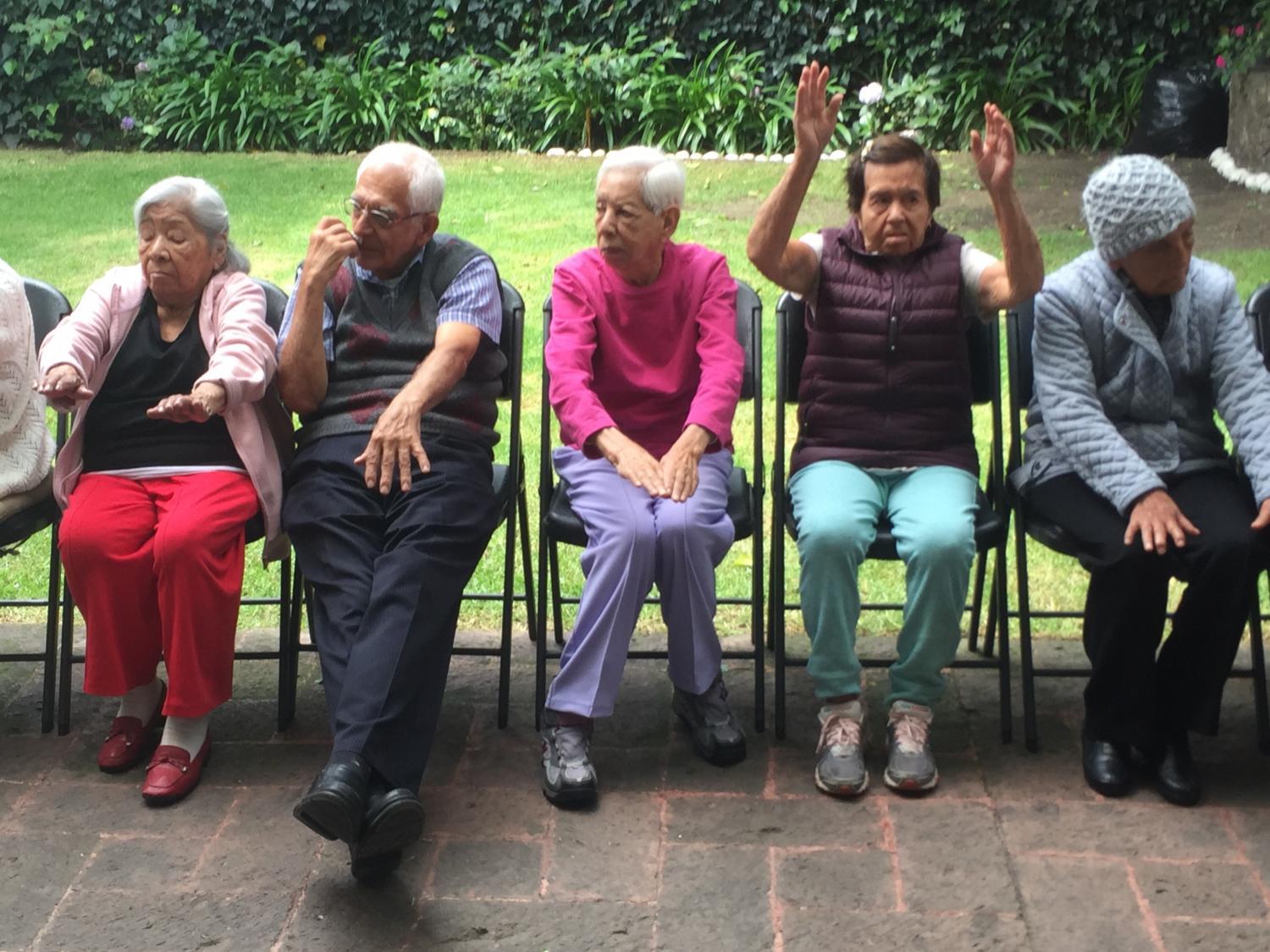 A Friendlier City For The Elder

The city’s government is preparing to open two facilities similar to Alzheimer México in the near future, according to Rigoberto Ávila, director of Mexico City’s Institute for the Elder. Almost 8 percent of the people his office serve might have some kind of dementia.

The exponential growth of an aging population is already a huge concern for the government, according to Ávila.

The city is already offering free training for those who have to take care of their seniors, and more than a thousand have already taken the sessions. Ávila said the majority of them are women.

People over 68 can get free access to public services, like certain health treatment and transportation, as well as a food pension and discounts in several businesses — including free movie tickets. There are even chess tournaments between high school students and seniors to promote integration. But there’s more that needs to be done.

“The city needs to become friendlier for the elder,” said Ávila. “The most important thing is to educate our society, not only to take care of the elder, but to prevent what’s coming; we are all going to grow old at some point.”

Reyna and Marisa Osuna can only afford to take her mom Toñita once a week to Alzheimer México, about 8 miles away. 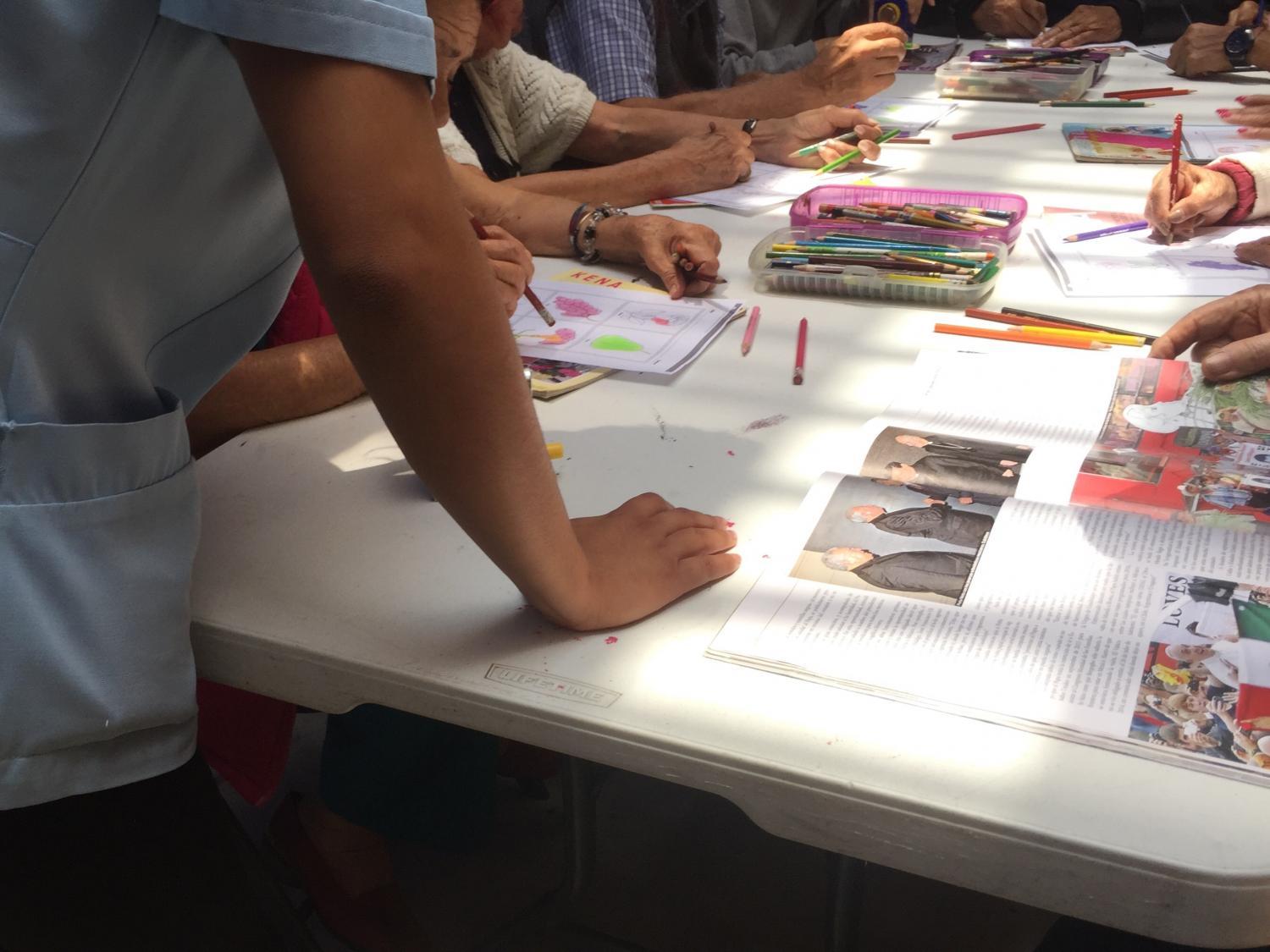 (Photo by Rodrigo Cervantes - KJZZ)
Drawing, reading and coloring are some of the activities at Alzheimer México.

At this nonprofit daycare center, people with different states of Alzheimer's gather up to get physical and mental therapy.

Among the activities, seniors draw and play games based on motion exercises, like carrying trays with plastic bowling pins.

In one session, patients are blind-folded while listening to soft music. Toñita is among them, and puts her hands in a box to identify objects and textures. “How does it feel?” therapists ask.

Toñita knows it’s not dry, but she can’t remember the word for “wet.”

Toñita and I weren’t able to communicate verbally. But the last time I saw her, she spoke to my heart, as she unexpectedly sang a mariachi melody that my grandmother used to like, called “Cien Años.”

And I can still hear part of the lyrics in my head:

"It hurts to know that you forgot me, and yet I know you will be attached forever to me."

More About The Sources
Alzheimer México