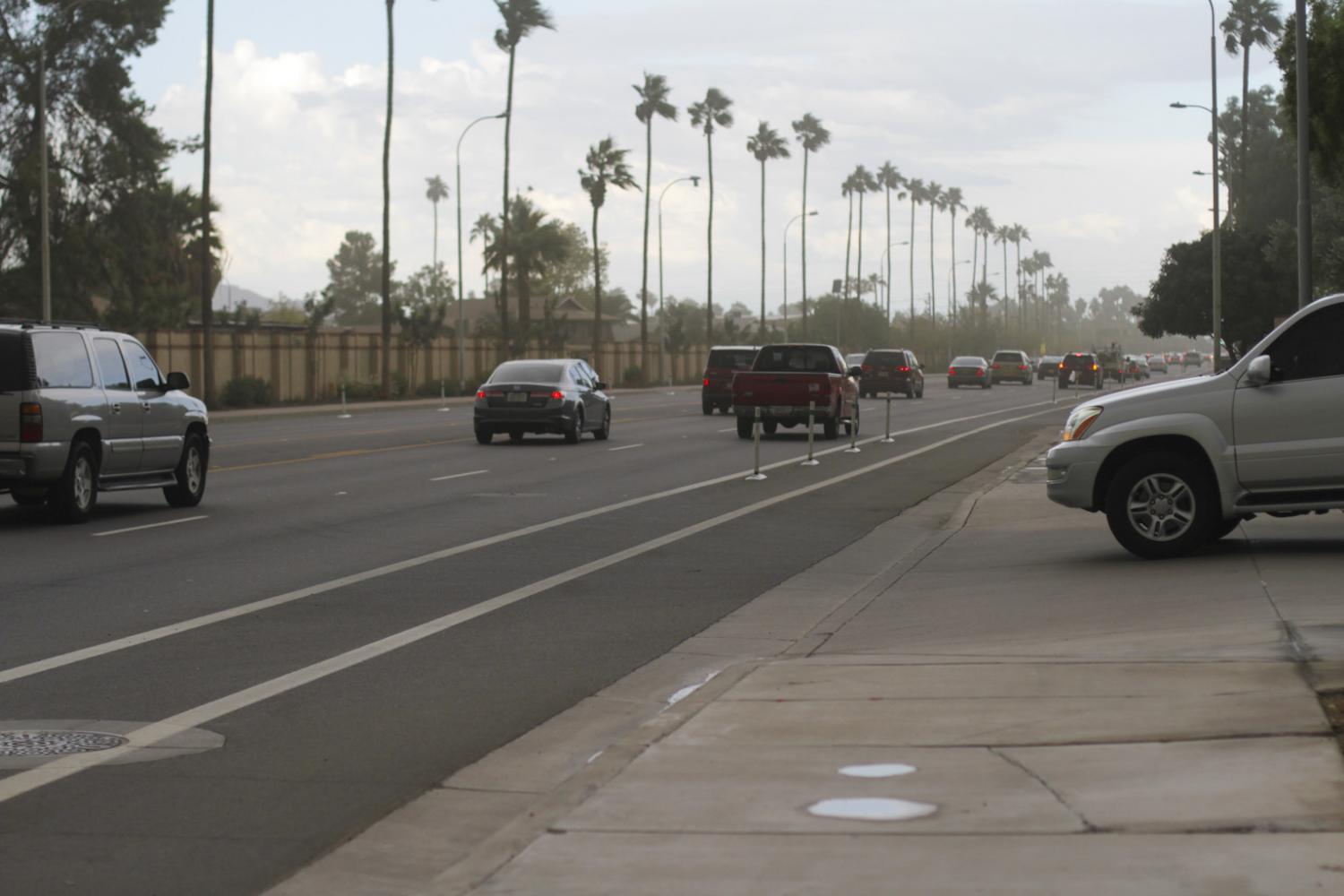 (Photo by Mariana Dale - KJZZ)
Cyclists say the buffered bike lane on McClintock has made the street safer.

Amazon has a long wish list for the site of its second headquarters. On it is a big city with diverse transportation options, including bike lanes.

Arizona cities like Tempe want to be competitive, but changing priorities from residents on four wheels to those on two wheels, or even on two feet takes time.

Swapping a southbound car lane for a buffered bike lane on McClintock Drive set off years of controversy in Tempe.

“We were drawn to this area because we wanted to attract and retain talented employees because that’s the best way we can provide excellent service to our customers,” said spokeswoman Naomi Johnson.

The weather, nearby ASU and transportation were all factors the insurance giant considered when it made Tempe one of three regional hubs, she said.

In an increasingly competitive market, employee’s needs and desires drive decisions such as where to locate.

“What we’ve seen in the last 10 years is the power switch to the employees in gaining really qualified employees,” said Greg Mayer, a senior director with global real estate firm Cushman and Wakefield. “Now the locations of office buildings are typically closer to the employee than the head decision maker.”

For cities that fit the bill, there can be a big payoff.

For example, Amazon says it will create up to 50,000 new jobs at its second headquarters. State Farm plans to eventually have between 8,000 and 10,000 employees working out of the Marina Heights office.

Mayer said Tempe is one of the hottest commercial real estate markets in the Valley.

Transportation is one of the central themes in Amazon’s request for proposals for its second headquarters.

Closeness to an international airport, highways and mass transit are all core preferences for the building site. The company also wants bike lanes, light rail and sidewalks to “foster connectivity” within the site itself.

Tempe hopes to become a “20-minute city,” an area where you can get to daily needs via a 20-minute walk or bike ride.

“As they move out, I’m sure they’ll want to ride to work,” Kennedy said. “It’s just a way of life here.”

RELATED: Can Metro Phoenix Ever Become Bike-Friendly? MCDOT Is Trying To Find Out

Tempe counts about about 175 miles of bikeways right now. The city’s general plan, the outline of what it hopes to accomplish by 2040, mentions bikes and bicycles almost three times more often than cars or vehicles.

“It kind of calls out the idea of moving people as opposed to moving vehicles,” said Dresang.

Voters approved the plan in 2014. In addition to emphasizing infrastructure for bicycles and pedestrians, the plan discourages the “use of single occupant vehicles.”

But no project has drawn quite so much praise and outrage as McClintock Drive.

Just read a few of the comments made over four hours at a September Tempe City Council work study meeting:

“Every morning I sit in a gridlock and watch cars zoom up the bike lane,” said Mary Lambert.

“Those who bike are equally as valuable as residents,” said Zoe Stein.

Patrick Gilbery, who also manages the shop at Tempe’s Bicycle Saviours, said McClintock used to be part of his regular bike commute.

“Even though there wasn’t a lot of traffic, I was verbally harassed, I was honked at and generally made to feel unwelcome on the road,” Gilbery said

City traffic records showed the number of cars on McClintock between Broadway and Guadalupe Roads went down 22 percent between 2004 and 2014.

The city had trimmed vehicle lanes down before, see Broadway Road from Mill Avenue to Rural Road or Priest Drive from Washington to the city’s north border.

When Tempe repaved a 3-mile stretch of McClintock road in 2015, the space from a third car lane on some southbound sections was eliminated to make room for a buffered bike lane. The project’s total cost was about $1.6 million.

The response was unprecedented for a project that had drawn 46 people to an open house months before the the repaving started. The city reported it passed out 5,800 door hangers about the meeting to nearby neighbors.

“I think we got so much feedback because it really changed people’s lives,” Dresang said. “People get comfortable to what they’re used to.”

Dresang was one of several city employees who spent the last two years trying to come up with a compromise.

The estimated cost is $3.6 million, more than double the cost to repave the road in the first place.

“I think that it’s easy in a plan to say that people are interested in reducing travel lanes and adding bicycle lanes, but when it actually happens in people’s backyards and impacts their life directly then I think it kind of changes that conversation,” Dresang said.

Right now, Tempe has no plans to trade more car lanes for bike lanes. Bikers like Gilbery said they want to see the city do more for cyclists.

“It’s important for everyone to be able to get where they’re going no matter what form of transportation they’re taking and it’s important for them to get there conveniently and without fear for their life,” Gilbery said.

“One of the appeal for moving here was actually the ability to be outside,” said State Farm IT Analyst Leann Steidinger.

She bikes to work whenever possible and has even convinced coworkers to give it a try.

“I always feel even though it might take me a little longer to ride my bike to work versus drive, I’m a lot more relaxed,” Steidinger said. “I’m a lot more energized to start the day just because I’ve gotten a little exercise and I’m outside.”