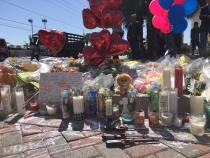 (Photo by Carrie Jung - KJZZ)
A small memorial set up on a street island on Las Vegas Boulevard near the crime scene.

Though business and local government offices in Las Vegas are beginning to get back to their normal schedules, many people on the strip are still taking time to pay their last respects to the victims who died in Sunday night’s mass shooting.

Under normal circumstances the street island on Las Vegas Boulevard just east of the Mandalay Bay resort is not a crowded place. It’s used mostly as an area for pedestrians to wait for the next green light.

But this week, the palm tree lined patch of ground, which is just feet away from the crime scene, is playing host to a small memorial. Locals and visitors, like Paula Fitzsimons, are coming to light candles, leave cards and say a prayer.

"You know it’s just time to reflect on their short lives and how suddenly they were out to a nice night in Las Vegas and they end up going home in a coffin," Fitzsimons said. "It’s just so sad."

Fifty-nine people, including the shooter, were killed in Sunday night’s mass shooting and 489 were injured. About 50 people remain listed in critical condition.