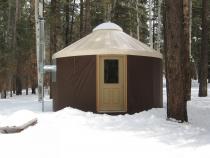 (Courtesy of the National Park Service)

They call it a yurt. A permanent structure that is a cross between a cabin and a tent.

Unknown to the general public, but well-known among backcountry hikers, the Grand Canyon’s North Rim yurt will not see another season.

The National Park Service plans to demolish the structure in an effort to protect visitors from rodents and other hazards.

Kirby Shedlowski with the Grand Canyon National Park said hikers should have another plan to camp in the area.

Access to the North Rim will close to overnight visitors on October 15.

Those who plan on hiking and staying in the area over the winter will need permits.