Latina Sees Caring For Her Mother As Part Of Life's Circle 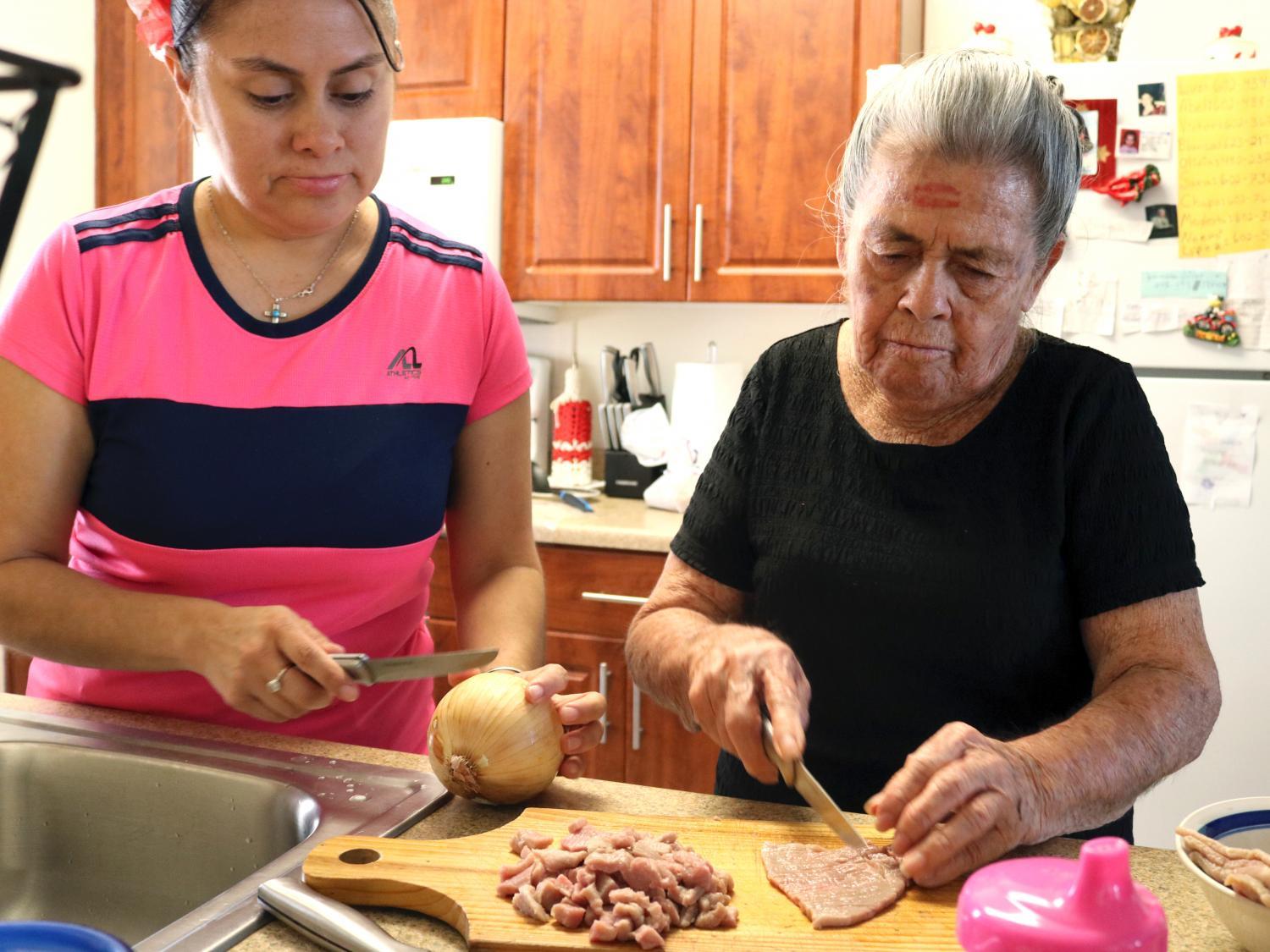 Arizona has long been a destination for older adults, with its pristine retirement communities and warm climate. But aging in America isn't what it used to be. The issue isn’t going away. We have to talk about it. This is Part III of "The State of Aging in the Valley," a series that explores the reality of an aging society.

Her hands may shake, but Arminda Perez-Castillo is still very good with a kitchen knife. The 79-year-old swiftly cut beef into small cubes for a dinner of "guisado," or stew.

“Did you add salt?” Perez asked her youngest daughter in Spanish. 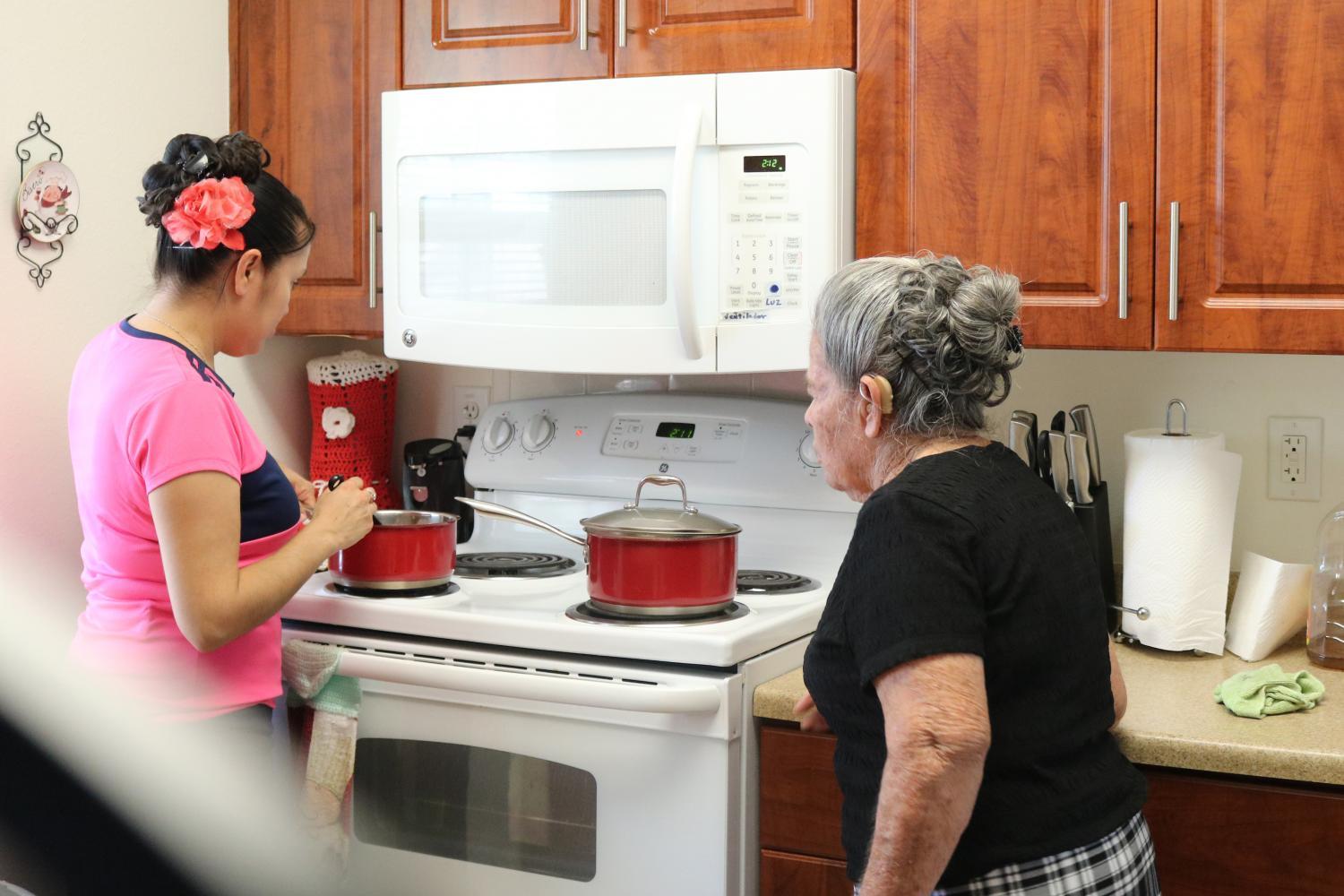 (Photo by Jackie Hai - KJZZ)
Romero and Perez in the kitchen of Perez's apartment in a senior housing complex.

In 2000, Perez was hit by a car. Romero has been her caregiver ever since. Cooking is just one of many things they do together.

“My mom has symptoms of dementia,” Romero said. “And she has Parkinson’s. And she has osteoporosis.”

Romero has given up a lot for her mother. She quit college and later had to stop working.

“My life and my children's life work around her schedule,” Romero said.

These sacrifices are so her mom will never live in a nursing home.

Federal data supports Romero’s claim. Despite having a longer life expectancy than Whites and African-Americans, Latinos made up just 5 percent of the national nursing home population in 2014.

The first ever in-depth study of Latino caregivers, published in 2008, found that 84 percent believe they were raised to care for a loved one. The report also said Latinos are more likely to feel shame for not look after an elderly parent or relative.

“A lot of my job is referring people to resources that deal with say aging or caregiving,” said Daniela Saylor, program manager for the Phoenix-area nonprofit Duet. “But when I speak with folks from the Hispanic community, I get a whole other range of questions.”

Saylor was a teenager when her father had a stroke. She saw the toll years of caregiving took on her mother. Saylor now runs support groups to help people like her mom.

“Caregivers across the board feel isolated,” Saylor said. “And when I think of Hispanic caregivers, I think of that tenfold.”

(Photo By Matthew Casey - KJZZ)
Daniela Saylor, program manager for Duet, was a teen when her father had a stroke. She saw the toll years of caregiving took on her mother. She runs support groups to help people like her mom.

Cultural and language barriers can make Latino caregivers feel even more alone. Nearly half of Latinos said they struggled to communicate with a health care provider, according to a recent poll.

Still, having the information available in Spanish isn’t always the solution, Saylor said.

“Even if it’s a great translation, it doesn’t mean that you understand that process or what the implications are, especially if you’re inherently distrusting of more formalized processes,” Saylor said.

In Maryvale, the Promotores movement works to build Latinos’ confidence in the system. Promotores are grassroots activists. One of their many jobs is teaching Latinos how to navigate the health care system.

“We just want to empower them and give them the tools to succeed,” said Lourdes Cordova, a promotora, who works for Arizona State University’s HOPE Network.

As a caregiver for her own mother, Cordova understands the anxiety of having to make sure a loved one takes the right medicine.

“As a promotora, we are the bridge to give [caregivers] all the information from the agencies [and] from the hospital,” Cordova said.

“I want something to put here,” Perez said in Spanish. “I need something small, right?”

(Photo By Matthew Casey - KJZZ)
Lourdes Cordova is promotora who works for ASU's HOPE Network. Promotores are grassroots activists. One of their many jobs is teaching Latinos how to navigate the health care system.

“Yes,” Romero answered. “It could be some flowers.”

Romero and Perez live apart. But taking care of Perez is almost a full-time job for Romero. It’s been a struggle at times. But having access to Promotores and support groups has helped Romero better understand her mother.

“I have more patience for her,” Romero said. “I admire her more because I see other people and think, ‘Oh, my mom is not that bad.’”

Romero thought about having Perez live with her. But her mom has always lived alone. The compromise was an apartment in a complex for seniors. It's run by the Cesar Chavez Foundation, and Perez has built relationships with her neighbors.

Romero learned how to be a caregiver by watching Perez look after her grandmother in Mexico. She expects her own daughters do the same.

When Perez reaches the point where she can no longer live alone, Romero will bring her mom to her house. So she can spend her final days surrounded by the love of her family.

“Why take them to nursing homes while we can be there for them like they were for us when we were small,” Romero said.