Download mp3 (5.82 MB)
Casey Kuhn/KJZZ
A diamondback rattlesnake removed from a home in the Phoenix area.

Arizona is known for its mountains, desert and host of ground-dwelling, slithering reptiles — which can end up as uninvited dinner guests in your dining room. Enter the snake remover. One local man has built a thriving business around relocating rattlesnake that's growing along with the Valley’s development.

Behind a suburban Phoenix home, stacked cases fill a studio, where rows and rows of glass fronts show a huge variety of snakes. They’re displayed like rare jewelry, with different colors and patterns and sizes. And, also like rare jewelry, they're locked up tight.

For some, a nightmare. But for Bryan Hughes, it’s a dream come true.

Bryan Hughes has built a growing business around taking unwanted snakes from people's homes after he turned away from a lucrative career in design.
(Video by Casey Kuhn - KJZZ)

“I used to catch snakes when I was a kid," Hughes said. "So you grow up and see people cut their heads off whenever they see them and say, 'oh that can’t do.'”

Hughes said he once wore a small boa around his wrist like a bracelet to school.

A decision that didn't exactly go over well with his teacher.

As an adult, he still goes out and finds snakes, including a rarely-seen Arizona ridge-nosed rattlesnake, the state reptile.

Some of his collection comes from poaching rescues. The black market supports a robust trade of rare rattlesnakes. In fact, Hughes says the more protected the snake, the more its worth, sometimes leading to the opposite of conservation's intended effect.

Now, Hughes has built a growing business around taking unwanted snakes from people's homes after he turned away from a lucrative career in design.

“This was not the plan," he said, laughing. "It doesn’t matter how good my career is, I love this. I get to do this and make as much money as I did before.” 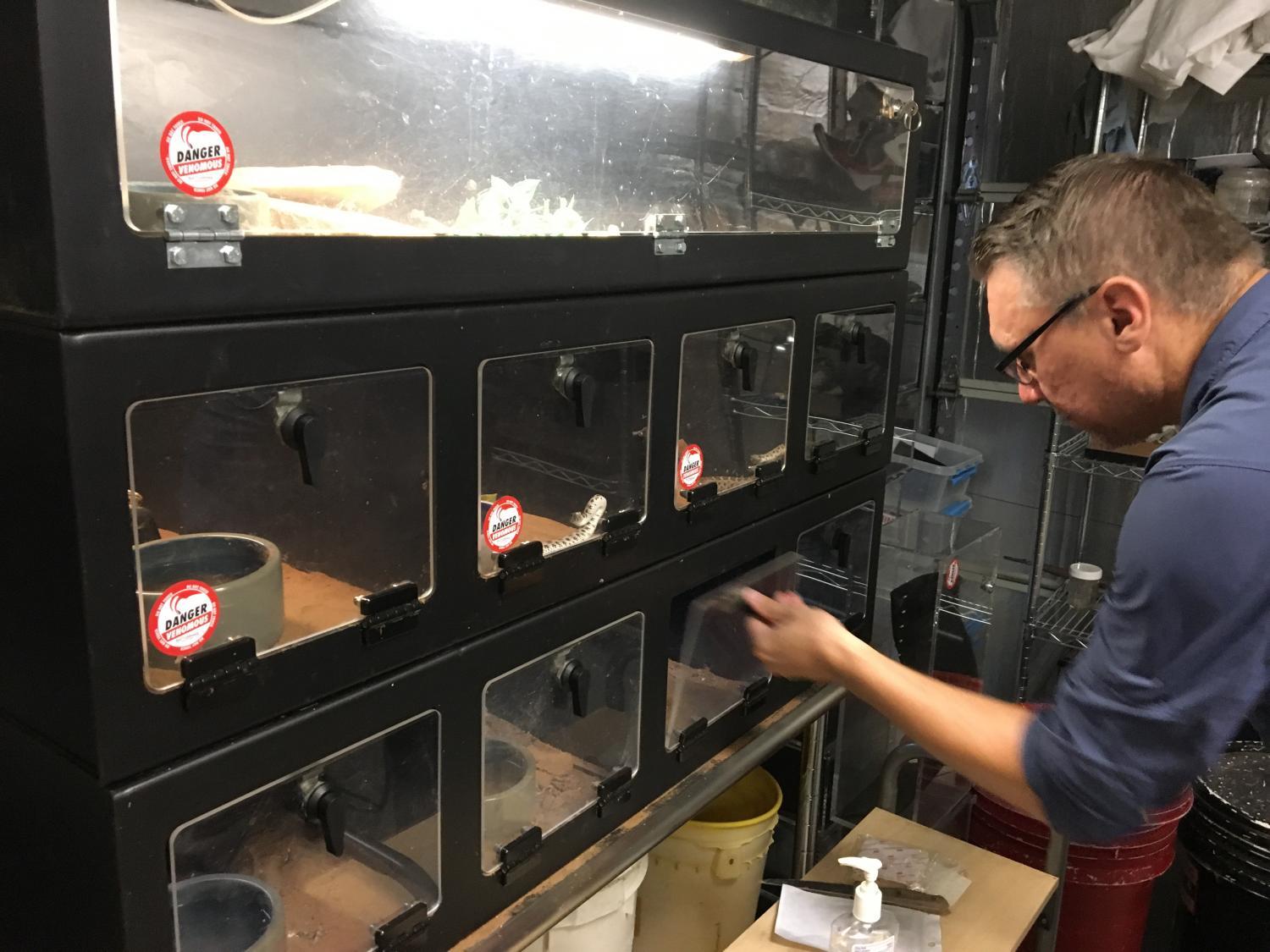 (Photo by Casey Kuhn - KJZZ)
Bryan Hughes looks through his collection of Arizona-native rattlesnakes. Each case is locked.

He estimates making a six-figure amount this year, most of which is savings from not having to hire out web development or promotion.

Hughes is known as the go-to rattlesnake remover guy.

It's a local business born from the environment.

“We have more species of rattlesnake in Phoenix than most states have entirely," he said. "There’s no snakier place in the country.”

There are six species of rattlesnakes found in city limits. The most common is the iconic diamondback.

Hughes started his business in 2007 when he would answer calls himself to remove and relocate a rattlesnake. 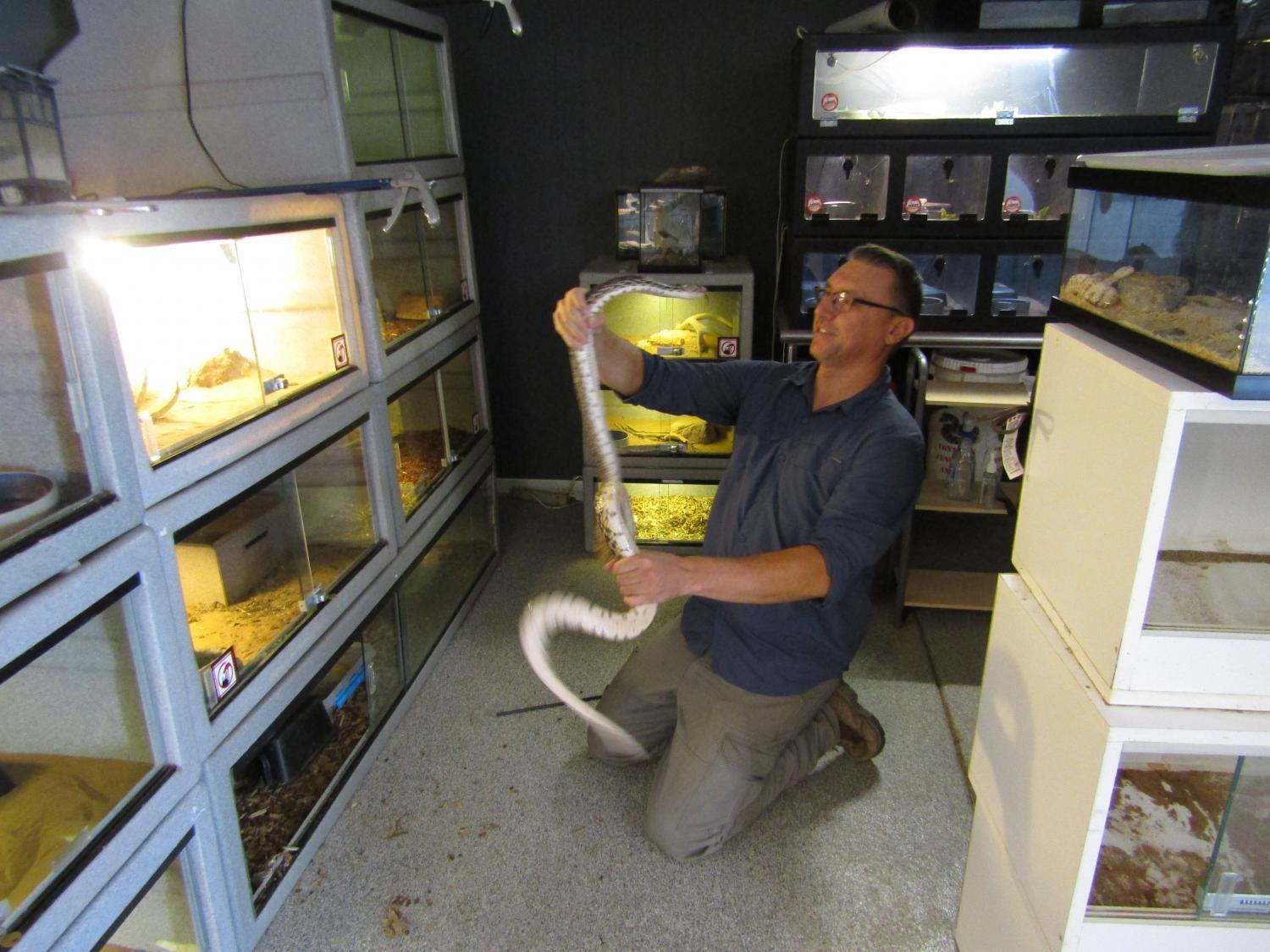 (Photo by Casey Kuhn - KJZZ)
Bryan Hughes shows off a large gopher snake in his collection. It is not venomous.

Now, he has two other full-time employees — and he’s developed an app that’s like Uber for snake calls.

“It’s kind of as-needed. I have a lot of people that historically are students or people who want extra money that can log in on the weekends and make some money,” he said.

Someone can log on and if Hughes gets a call for a removal in the West Valley, his team there gets a ping and handles it.

Right now, October, is a good time for that rattlesnake gig economy as the weather cools down, and snakes are on the move to eat and settle down for the winter. 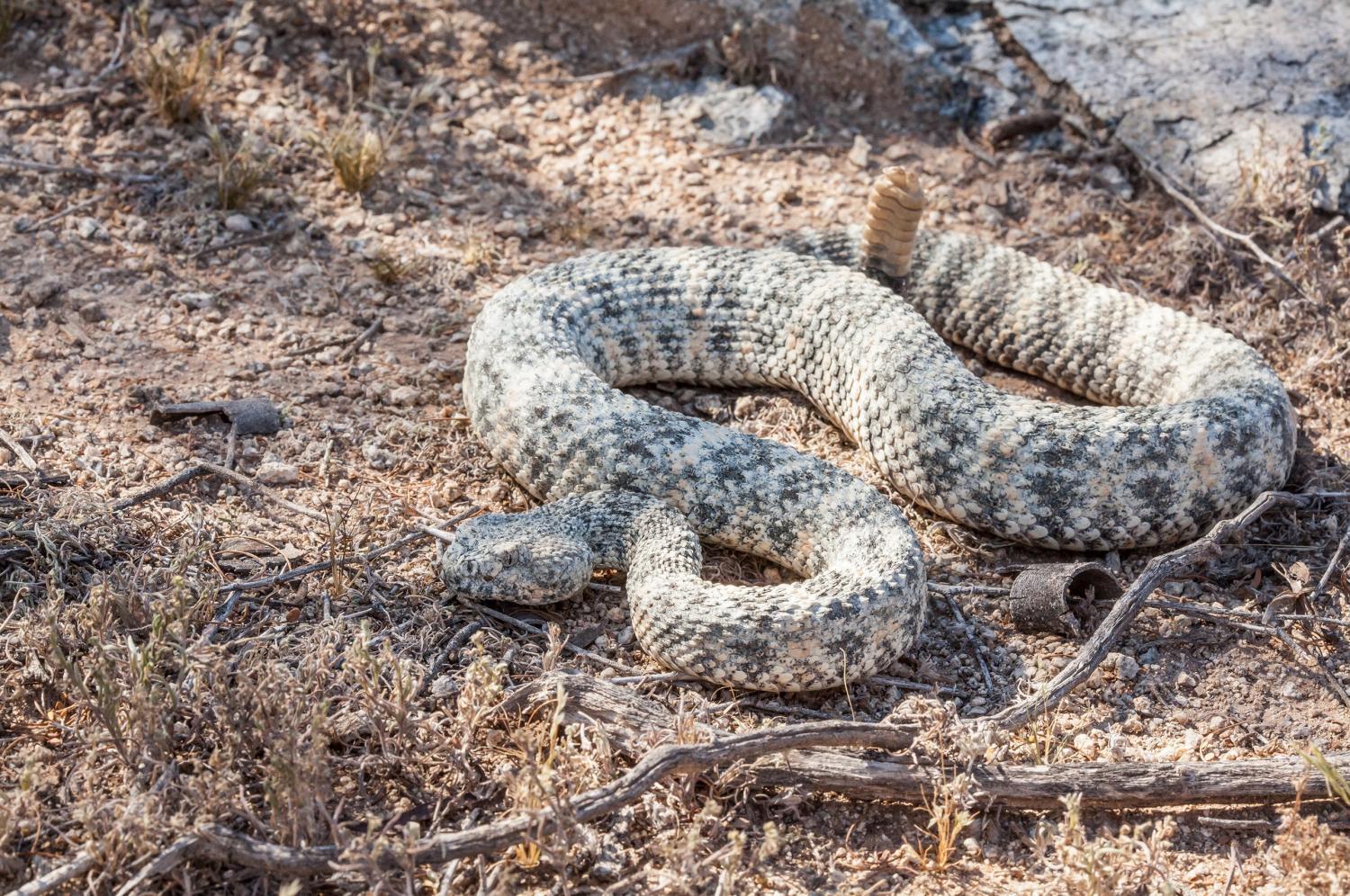 But it’s not a good time for the homeowners who find them in their backyard like Suzette Denvir in far east Mesa.

“I was waiting for that day and hoping it would never come,” she said.

Denvir and her husband moved to this brand-new development from Connecticut four years ago.

It’s right against the desert. She’s used to other wildlife, like bobcats, but this time, she called Hughes after finding a baby rattlesnake under her garbage bin.

“I saw him curled up there and I freaked out and I googled and I called for somebody to remove him,” Denvir said.

Denvir used to be a veterinary technician, so respects wildlife but knew not to get close to it.

After calling the number she found, Hughes showed up with a large bucket and long hook to grab it. He moves the bin to find the espresso-saucer-sized snake, whose gray and brown back blends perfectly in with the gravel. “Oh there he is, oh he’s a tiny little baby diamondback,” Hughes said, getting ready to pick it up.

He moves the bin as Denvir looks on, from a safe distance, and scoops it up.

“Alright let me throw him in the bucket,” he said.

Denvir asked if Hughes was going to put the snake somewhere safe.

"Yeah I’ll give him a little drink of water and put him out in the desert," he explained.

"So you’re not going to euthanize him?" Denvir asked. Denvir’s home is surrounded by construction sites for new developments, which Hughes says can make it difficult to relocate the snakes safely.

That development is what’s driving snakes into homes. As Phoenix keeps expanding, more snakes are being displaced.

Most of Hughes’ calls come from those fast-growing areas like Queen Creek and through the Loop 202 expansion.

“The new 202 expansion and South Mountain, we’re down there almost daily now,” he said.

The Arizona Department of Transportation’s policy is to get a biologist to remove snakes in the area.

(Photo by Casey Kuhn - KJZZ)
Inside this rattlesnake bucket is a small snake removed from a home in east Mesa.

At the 22-mile new 202 construction site, eight snakes have been relocated so far.

Real-estate agents also have to deal with snakes, usually in the form of questions from potential homeowners coming from less snakey places.

Agent Paige Livingston is happy to educate them.

“They need to know that we’re in their environment," Livingston said. "Essentially, we’ve built on top of their habitat.”

She said she always tells buyers to not kill it, though she understands it can be scary for families with pets or young children.

Livingston said it actually helps her business when she can show buyers that a healthy respect is the best way to deal with rattlesnakes, as well as safe removal, and thinks other real-estate agents would do well to follow suit.

“If every realtor had at least some basic information or at least where they could go for the relocation, then it would just save a lot of people a lot of fear,” she said.

For Bryan Hughes, he hopes to expand his business even more by working with developers and homebuilders to create a “snake certification” — a way to prove a new house would stay free of snakes with specialized fencing and gates.

“The city’s going to keep expanding," he said. "You’re basically fixing the immediate problem but you’re not fixing the long-term problem by just removing them.”

By the way, he’s never been bitten by a rattlesnake. And his business has grown so much, hopefully no one else will be either.