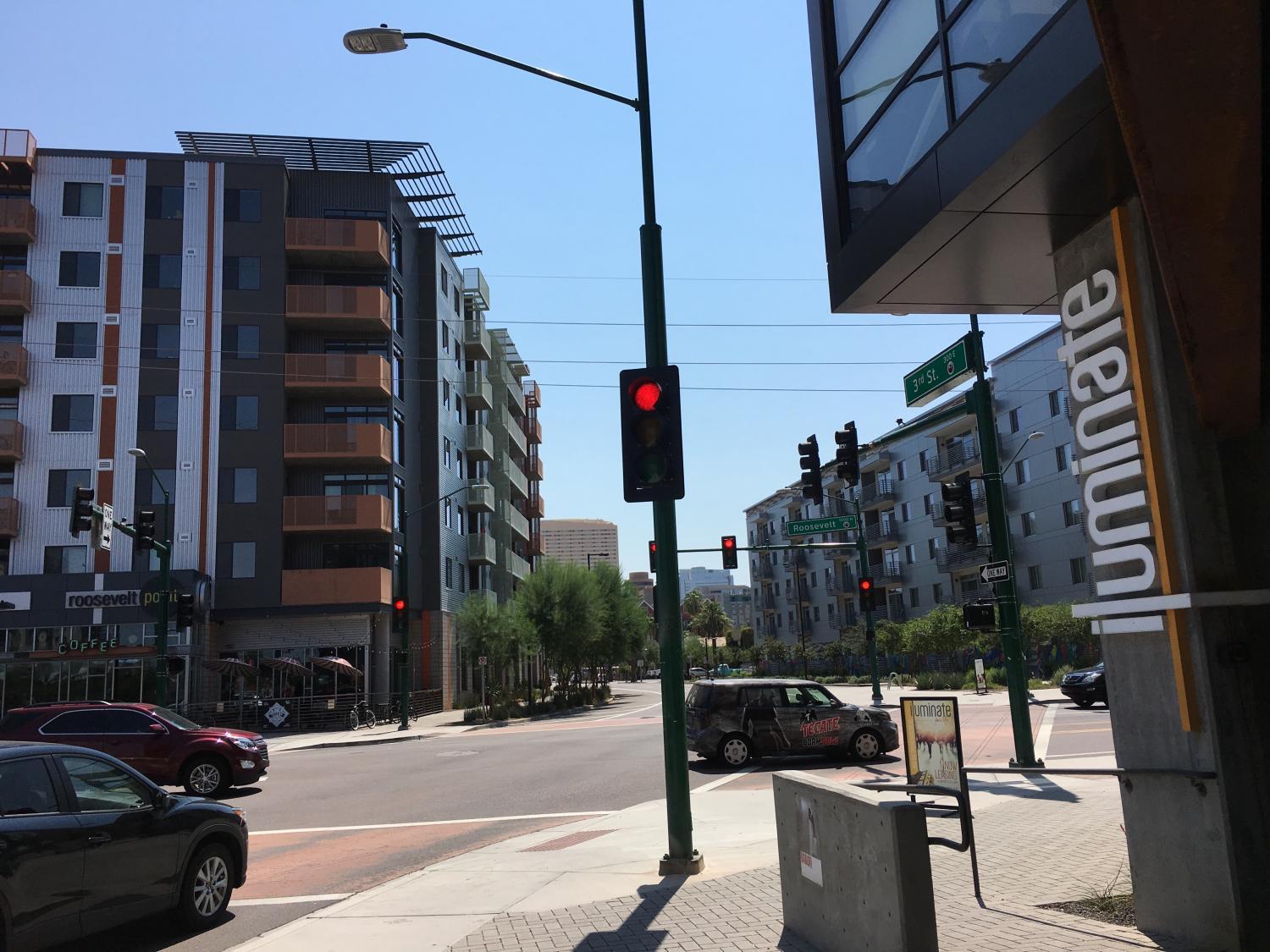 (Photo by Christina Estes – KJZZ)
As downtown development continues, some residents may have few housing options.

The New Neighbors project is a collaboration between KJZZ and the Arizona Center for Investigative Reporting that looks at how the Valley of the Sun has changed since the economic downturn a decade ago. Today, we’re in the middle of a real estate and rental market boom, our cities are centralizing — it’s all changing the face of our communities Valley-wide. This is Part II of the "New Neighbors" series.

An area covering less than two square miles in downtown Phoenix has been attracting major money. According to the Downtown Phoenix Partnership Inc., more than $5 billion in public and private dollars has poured into downtown since 2005, much of it going to new housing.

Daniel Drane, 29, could be the poster child for what city leaders envisioned a dozen years ago when they approved a strategic plan for downtown.

Less than a year ago, Drane and his husband moved into a high rise apartment building offering 360-degree rooftop views.

“This was one of the big selling points,” Drane said.

“We go to a lot of the restaurants and stuff here in the local area,” he said.

Over the past five years, more than 15 housing projects have been built downtown, many labeled luxury. Advertised rents for a one-bedroom at Drane’s complex run up to $2,400 a month. With so much cash flowing in, some worry it’s driving others out.

(Photo by Christina Estes – KJZZ)
Daniel Drane and his husband work and live downtown with their dog Henry.

What About Workforce Housing?

During a Phoenix City Council meeting earlier this year, Vice Mayor Laura Pastor expressed concern about the future of downtown.

“We know eventually when it is built ... affordable housing or workforce housing won’t exist,” she said.

She raised the issue as the council prepared to vote on a $30 million tax break for a developer planning to build luxury apartments. The developer offered to set aside 5 percent of units for workforce housing. That means rents would be lower than market rate, but not involve government subsidies. Pastor wanted to see 15 percent.

“That 5 percent is pretty close to what they can afford and still make that 6 or 7 percent rate of return," said Mackay.

Last year, her department buildings with 50 or more units within a 5-mile radius of downtown and found nearly 75 percent would be considered workforce with people paying “somewhere between $750 a month and $900 a month.”

But, the Downtown Phoenix Partnership has different numbers. The nonprofit community development group focuses on 7th Street to 7th Avenue, McDowell Road to Lincoln Street. In that area, the group says there are no workforce units in buildings with 50 or more units with monthly rents between $700 and $970.

“This is actually the hardest price point to hit in downtown because there are no subsidies/tax credits for that price range and land/cost of construction is too high," Dan Klocke, executive director, wrote in an email.

As new projects are built, Mackay said older ones will probably get cheaper.

“And that’s where workforce housing typically comes from is the private sector market takes care of itself. New product comes in, the older product resets itself and people move freely about the market," Mackay said.

Sometimes it can work, she said, if there’s a strong supply and rents hold stable, but, “if this new luxury development comes in and it’s leased up within a month or whatever like really fast and it’s full the other landlords around there are going to be like ‘Whoa, wow, huh. I can charge a lot more for my property.’”

Pfeiffer acknowledges many cities like Phoenix may never require developers to provide workforce housing. That’s why she encourages voluntary programs and thinks cities should concentrate on preserving downtown housing for lower-income workers.

The payoff, she said, will be felt citywide.

“If we want to be a tourism center we want to have diverse, interesting neighborhoods that people want to visit, that have funky things happening in them, and that have, you know, history to them," said Pfeiffer.

The Phoenix Economic Development Department currently has one active contract that involves 13 workforce housing units. Two others in the pipeline could add 40 more.

At that council meeting where Vice Mayor Pastor brought up the issue, she joined the majority of her colleagues and gave the developer property tax breaks, but added, “I plan on in the future to look at workforce housing. To get that benchmark that we need to get to.”

The Downtown Phoenix Partnership says nearly 5,000 units are under construction or being planned. Because city leaders want to see more high rises and there are no tax credits for units the fall into the workforce category, it will be challenging to ensure lower — income workers can live downtown with their higher-income neighbors like Daniel Drane.

That changing skyline in downtown Phoenix is also having an impact on business owners in the area. Take Jobot Coffee for example. Owner John Sagasta told us flexibility is his secret to staying open and profitable these days, especially after his company’s recent move from their longtime base in a retrofitted historic house near Roosevelt Row to a much more modern retail space just down the road.