There’s another hotel sprouting up in downtown Phoenix. As the urban core fills in, construction crews have less room to work. It’s just one of the reasons many contractors are turning to prefabricated construction.

A semi stacked with pre-made wall panels enters the site at First and Polk streets as Project Engineer Zeke Delgadillo looks on. “It’s all panelized exterior panelized interior all the way through finishes on the exterior and drywall on one side on the interior,” he said. 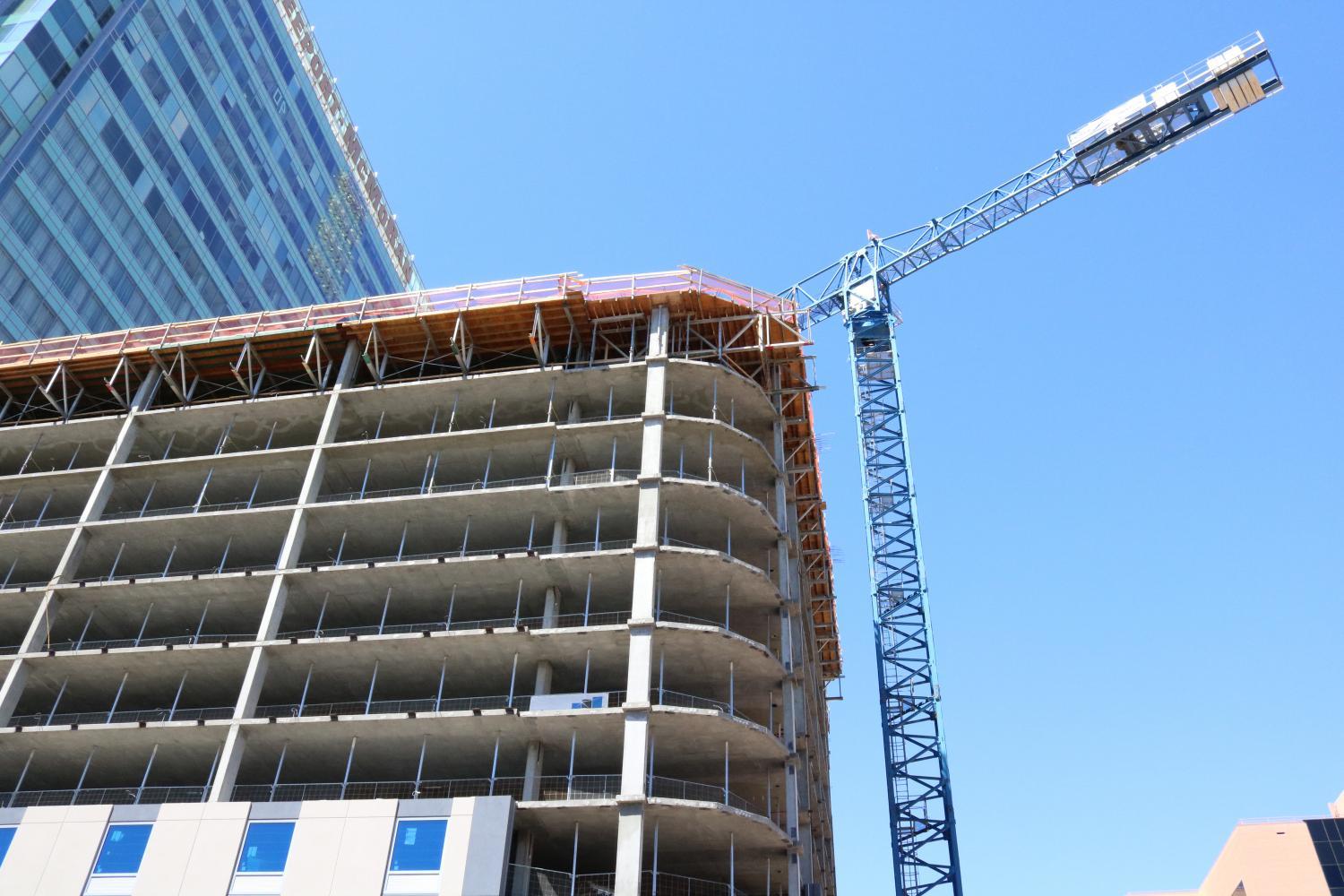 Jackie Hai/KJZZ
A Hampton Inn under construction at First and Polk Street.

A giant crane lifts the panels up to what will become the 11th floor of a Hampton Inn. The prefabbed walls all have a designated place so workers can put them up quickly and efficiently.

Inside on the 11th floor, two workers hoist up a prefabbed wall and slide it into place. All the components — wall sockets, wiring, plumbing — are already in the wall.

On the lower floors where more intricate, specialized work is needed, you’ll still find masons, electricians and plumbers. But on the upper floors where all the rooms are the same, there are no tradesmen at all.

Dean Wine is the Arizona Building Trades President. He said trade unions have embraced the prefab process. "I mean unions never like to see skilled jobs go away but you have to embrace change sometimes." He said low wages in Arizona have decimated the skilled labor force. “We have a lot of members who go to California and they’re making $70 an hour for electricians, so when we’re paying $27, people leave.”

He said unions are adapting to the changing landscape by adding new classifications for laborers with less experience. "If you’re not an apprentice or a journeyman, we still have a place for people who have a mid-range of experience to come and do the prefab work and kind of learn stuff about the trade as they move up in it,” Wine said.

At a warehouse in Tempe, workers on an assembly line are sanding and smoothing a wall panel causing white insulation dust to cover them like snow. Scott Root is the managing executive of Kapture Group, the company making the prefabbed walls for the Hampton Inn.

(Photo by Jimmy Jenkins - KJZZ)
A worker applies a finish to a panel on the assembly line.

"We have 32,000 square feet in the shop," Root said. "It’s set up in the assembly line manner so that the material comes in, gets staged and then goes to each of the stations.”

Workers assembling the walls follow instructions that look a lot like what you’d get with your IKEA bookcase. The plans are printed on a simple 11 by 17-inch sheet, color-coded to make assembly easier for less skilled workers.

It takes about four days for a panel to get all the way down the line and ready to be shipped to the construction site.

But Root said eventually he wants to expand from just building panels to "building large modules of buildings in a shop and delivering those to a job site and then that’s where assembling as a lego block will really add benefit to the clients.”

Back in downtown Phoenix, Chase Gibbs is keeping an eye on the Hampton Inn site. He’s a project manager for Mortenson, the contractor for the job. “Most of our owners always want things quicker and cheaper and in order to do that you have to find better ways of building it,” Gibbs said.

He said prefab construction allowed them to shave two weeks off the project, which is huge for a property like a hotel. “The quicker you open to the public, the quicker you’re gonna gain revenue and the less overhead you’re gonna have to build it of course.”