An Aging Population Means More Husbands, Sons Will Be Caregivers 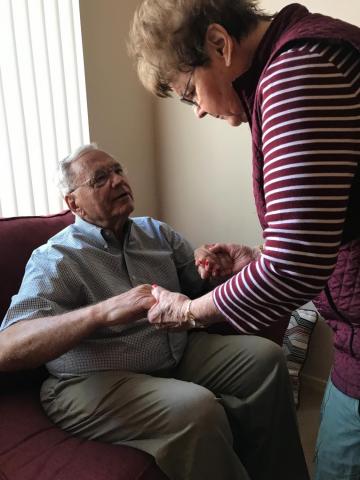 Arizona has long been a destination for older adults, with its pristine retirement communities and warm climate. But aging in America isn't what it used to be. The issue isn’t going away. We have to talk about it. This is Part I of "The State of Aging in the Valley," a series that explores the reality of an aging society.

Ten thousand Americans are turning 65 every day and the people who traditionally take care of them is changing.

Of the ​40 ​million family caregivers who are caring for their aging loved ones, 40 percent are men according to AARP. As the population continues to age, more male caregivers will tackle what was traditionally a woman's role.

Movie tough guy Danny Trejo appears in a PSA produced by AARP as part of its "Tougher than Tough" campaign. The idea is to encouraging more male caregivers to get the help and support they need to do what is a difficult job.

But these men probably wouldn’t say they’re the toughest guys on earth. In fact, they’ll tell you they do what they do out of love and because, if not them, who? Yet the typical family caregiver is not a man, according to AARP. It’s a 49-year-old woman.

“We don’t yet live in a world where men and women experience the burdens of life as well as the burdens of caregiving equally," said Addison Diehl. Diehl has been taking care of his mother, who has Parkinson’s disease, for more than six years at home. Before that, Diehls’ mother was living in a care facility.

"And, one of its demands in the caregiving world is that medications be administered on time every time," he said.

Diehl said his mother's medications were doled out within a two hour window - standard protocol. But, he said, the inconsistency may have led to a decline in her health.

"And I determined I could give her the medicine on time, every time and we changed our lives to accommodate that," Diehl said.

Like a lot of caregivers, Diehl left his job.

Today, he and his mother live on her pension, and a small sum he receives from the Arizona Long Term Care System as paid caregiver.

While he worries about his financial future, Diehl said “I’m grateful none the less. I’m recognized as a professional giving care, giving services in the home."

That distinction is important to him. Like a lot of men, he experienced a loss of professional identity.

"Other men similarly have experience the difficulty of that loss of professional identity," he said. And that’s why Diehl now facilitates a bi-monthly support group for men.

According to AARP, few men ask for support because they don’t want to talk about their feelings. But, at Diehl's support group they can express their frustrations or ask for help.

"In some cases it can even be 'My loved one has been violent to me verbally or physically...I think my loved one might need to be placed in a care facility what is that like? Has anyone done that before?'”

One of the men at the table is Don Cook. He came here after visiting his wife, who has been diagnosed with dementia. Like any caregiver, Cook has struggled with his new reality.

So he started attending support group meetings. Cook said he had to learn to forgive the dementia so he could be present for his wife.

“I don’t want her to forget who I am," he said. "I want to reinforce that every day. I love her. I want her to know that she’s not abandoned.”

Male caregivers are not just managing money or running errands. Many are involved with their loved one’s personal care, even when they’re no longer in their own home.

“I take her clothes home every day and I wash them once a week with mine. They will wash them. But they’re never pressed. They look disheveled. They look like a bunch of old people. I don’t want that. She wouldn’t want that,” said Former Congressman Harry Mitchell. He spends every morning with his wife Marianne, who has Alzheimer’s disease. He helps her with breakfast, he takes her to get her hair and nails done.

"Somebody told me every family ought to have a daughter because that's who's going to take care of you when you get old," Mitchell said. "And I said, 'well, maybe,' but I think it is an expectation that women will do that, and that's unfortunate."

Mitchell has become an advocate for caregivers. He and his son, Tempe Mayor Mark Mitchell, helped launch Dementia Friendly Tempe, which aims to support caregivers through its Memory Cafe and educate the community.

While these men have their willingness to ask for help in common, they remain the exception. And when they don’t seek help, Diehl said, "what often builds up is unrelenting unimaginable pressure and they often break in really gruesome ways.”

According to Diehl, that could include prolonged isolation, even murder-suicide.

As our population continues to age and life expectancy increases, more husbands and sons will become caregivers, continuing to redefine traditional gender roles and expectations.

EDITOR'S NOTE: This story has been modified to correct the name of Tempe's Memory Cafe and correct the percentage of male caregivers.