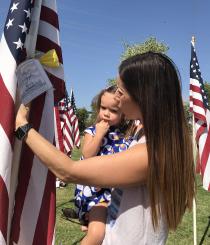 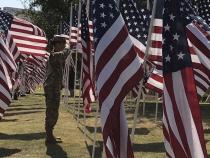 (Photo by Holliday Moore - KJZZ)
A soldier salutes each and every flag at the Healing Field in Tempe.

Millions of Americans are taking a moment Monday to remember the victims of the 9/11 terrorist attacks 16 years ago.

As commercial jets flew overhead in and out of Sky Harbor Airport, individuals waited patiently for a parking space at Tempe Town Lake. They’re here to see the Healing Field.

“To say prayers for the people that passed away," said 10-year-old Cecelia Damon, who was dwarfed by the nearly 3,000 flags standing in neat, seemingly endless rows.

She came here with her dad and her 12-year-old brother, Jacob.

“I didn’t expect this many flags, there are lots and lots,” said Jacob. “It just makes you feel a little sad inside, because all of these people were just so innocent and didn’t deserve this.”

Natalie Jan stopped to read a card to her 2-year-old, and it all came into perspective.

“'Dana Folkenburg, 3, was travelling with her father, Charles Falkenburg, mother, Lindsey Whittington and her sister Zoey.' So she was 3 years old," said Jan.

Nearly 3,000 people were killed and more than 6,000 injured that day as terrorists forced two passenger jets into the Twin Towers, a third into the Pentagon and a fourth into Pennsylvania farmland.

“It’s an event that we should never forget. I remember feeling the pain that day and I brought my children to educate them on the courage people went through to try and save lives,” said Andrew Damon.

Many of those who died were the first responders trying to save lives trapped in New York’s crumbling Twin Towers.

Monday evening at a 5:45 p.m., a full presentation will begin with the annual reading of all first responders killed while trying to save others on Sept. 11, 2001.