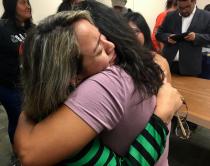 (Photo by Mariana Dale - KJZZ)
“I feel like we didn’t fight hard enough, but we did and it’s not fair,” said Lizabeth Luna as she embraced her friend, who is protected from deportation by DACA. 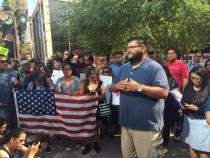 (Photo by Matthew Casey - KJZZ)
"We're not going back. Period," community organization Ricardo Zamudio told a group of supporters who had marched to ICE offices in Phoenix. 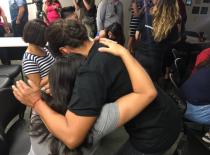 (Photo by Mariana Dale - KJZZ)
One of many embraces after the news that DACA will be ended.

Attorney General Jeff Sessions announced Tuesday a program that has allowed 800,000 young immigrants to live and work in the country legally will end in six months. In Arizona, there are almost 28,000 people who have received Deferred Action for Childhood Arrival protections.

Dozens of DACA recipients and supporters watched the announcement on MSNBC in Central Phoenix. In silence, people linked hands in support as their eyes welled with tears. Others wrapped their arms around each other.

RELATED: To hear an interview with KJZZ's Mariana Dale on The Show, click here.

“I feel like we didn’t fight hard enough, but we did and it’s not fair,” Lizbeth Luna said as she cried into her friend’s shoulder.

She was there to support friends and family she watched go to college and get jobs under DACA.

Adriana Garcia has lived in Phoenix for more than 15 years since her parents parents brought her to the United States from Central Mexico.

A tattoo on her back says “Aquí se respira lucha,” which roughly translates to “here we breathe the struggle.”

“There’s a lot of anxiety and fear when you’re undocumented,” Garcia said. “DACA was able to lift that a lot from me.”

She received a work permit in 2013 and now works for a Valley organization that provides legal aid to vulnerable women and children.

She said the decision to end the DACA is unjust.

"The game plan is to organize, it's to push back, it's to fight back against what this administration just did,” Garcia said. “There's not only 800,000 of us there's 11 million undocumented people and millions of allies that stand with us that want to see us succeed. "

Garcia recently got another tattoo on her left forearm. It reads “Still I rise.”

“It’s my reminder that we will prevail, that justice will come and we will be strong enough to rise up to this challenge and many others.”

‘A window of opportunity’

Garcia plans to lobby Congressional leaders for a solution to the program’s elimination.

In a statement, President Donald Trump said the six-month window before DACA’s end was “a window of opportunity.”

“It is now time for Congress to act!” Trump said. “Thus, in effect, I am not going to just cut DACA off, but rather provide a window of opportunity for Congress to finally act.”

The Department of Homeland Security, which is responsible for immigration enforcement, will reportedly not change its deportation priorities.

DACA Recipients Weigh In On End Of Program

Reporter Discusses Details Of How DACA Got Implemented

Federation For American Immigration Reform In Favor Of Ending DACA