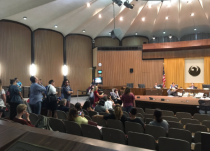 A week after a visit from President Donald Trump spurred chaotic protests in downtown Phoenix, the Phoenix City Council had the option to approve an external review of the police response.

After the first 15 minutes of public comment, when Mayor Greg Stanton tried to move on with the meeting, protesters flooded the chamber aisles demanding to be heard.

The mayor declared a short recess, left the room and came back with an option — move up the agenda item calling for a $45,000 external review of police actions on Aug. 22.

Nearly every speaker at the five-hour-long meeting spoke against the review and gave testimony on what they saw the night of the rally. That included resident Gina Mendez.

"And ya'll let the police mess up that day," Mendez said. "Y'all should be ashamed."

The several residents who spoke in favor of police actions were soon drowned out by boos and chants from those against.

Council members then discussed the review requested by City Manager Ed Zuercher Monday. Almost all were against it, either because it second-guessed police or because it wasn't independent enough.

So, Zuercher pulled his recommendation for the item, making a vote impossible.

"My attempt here was to respond to concerns for independent fact-gathering, but it's apparent my proposal is not viewed as objective and therefore I respectfully withdraw my recommendation for this item," he said.

The $45,000 contract with OIR Group would have included an independent review of police using tear gas and other dispersion tactics to break up a the protests the evening of the Trump rally.

"I expect that [review] to be an objective tool to help us learn all we can from the events of last Tuesday and to use any recommendations to improve our police department functions for future events and improve the city as a whole," Stanton said.

The council item did not go through. The first of 12 community listening sessions with Phoenix police will be Sept. 5 at 6 p.m.

Jeremy Helfgot spoke for the Phoenix Human Relations Commission at the city council meeting. He said its next meeting September 18 will include a public forum to continue hearing residents who said the police actions were extreme.

“Our intent is to continue the conversation in a different venue with an independent commission of private citizens who are volunteers so we can continue to explore these issues and work with the community to see that they’re addressed," Helfot said.

Casey Kuhn on The Show