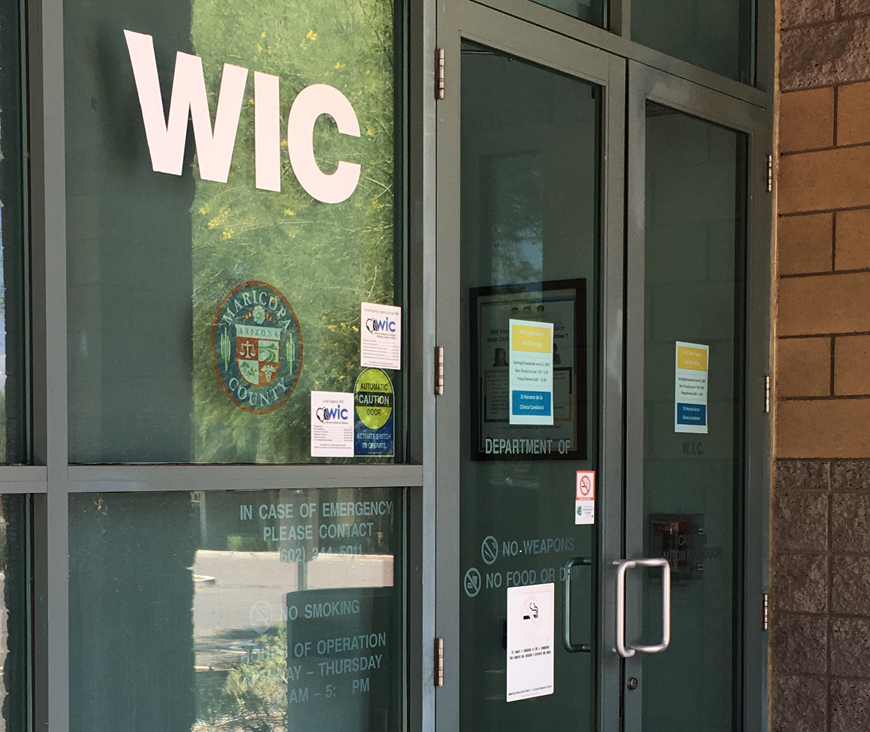 (Photo by Tiara Vian - KJZZ)
Outside the Avondale WIC office.

A program that serves tens of thousands of women in Maricopa county is taking big budget hits. The Women, Infants, and Children (WIC) supplemental nutrition program has seen its numbers drop over the past several years. There are 15 clinics in the Valley and as KJZZ’s Tiara Vian reports, WIC is closing two of them in Mesa and Avondale. Avondale closes on October 1st and Mesa has 6 months before it does.

“So ladies — my name is Margaret. I’m one of the dieticians, and so we’ll have a conversation," said Margaret Ward as she started the nutrition class.

Then the bad news.

“As you know the clinic is gonna be closing. So we’ve given you the phone numbers for the other locations," said Ward.

Miranda Denson is 27 and has been going to WIC since she moved to the Valley from Alabama earlier this year. Full disclosure, Denson and I were childhood friends. But she hadn’t been to the clinic for about a month. I sat down with her and her 9-month-old daughter, Mirayah, after she learned about the closure.

Miranda Denson said, “At first I was like, ‘No way. They can’t be closing.’ Because …”

As if on cue, Mirayah cooed in Denson’s lap.

(Photo by Tiara Vian - KJZZ)
Miranda Denson is 27 and has been going to WIC since she moved to the Valley from Alabama earlier this year.

Denson continued, “But thankfully it’s not because those really help — especially since I’m not working.”

She is referring to the checks she gets from WIC. Denson and her husband recently separated. He is a veteran and suffers from post-traumatic stress disorder. After their daughter’s birth, Denson’s husband experienced some emotional episodes so they decided it was better for Miranda to move closer to her family while he gets help.

Denson and her daughter go to WIC once a month to meet with a dietitian. In addition to getting nutrition education for Mirayah, they also talk about how Denson feels as a new, single mom.

“And at first I’m like, ‘No I don’t want to talk about my personal life with a stranger.’ But it does help because they do have resources,” Denson said. “If I am going through something I can choose to use their resources. So it is very beneficial to me.”

But Denson hasn’t taken advantage of all the services WIC has to offer.

The Avondale WIC clinic is one of two clinics closing on Oct. 1 due to a cut in funding from the state. Each fiscal year, WIC sends a report to the federal government with numbers of clients served. When that number falls below an average of 56,200 clients per month the state reduces its funding for the following year.

Carrie Zavala is the WIC program manager for Maricopa County. She said this has been a trend for several years.

“By far this was the most significant cut in recent history. It’s not unusual for there to be some fluctuation it’s just this was very significant," said Zavala.

So significant in fact, the county was originally going to close three clinics. One in Mesa, one in Avondale and a third in Glendale. The clients at the Avondale and Mesa clinics will be relocated to other similar clinics in the area. But there aren’t any nonprofit WIC clinics within a 5-mile radius of the Glendale clinic.

“So the state department of health — who is our funder — they were able to secure some special state funding," said Zavala. "Enough to keep us open for a year in hopes that we can find a community partner in order to manage costs.”

The Arizona Department of Health Services reprioritized operational projects, reduced contracted services, identified unencumbered funds, and restructured its printing services. But the state expects WIC to pick up the slack somewhere else in the future.

Recently, WIC implemented staffing changes in order to be in line with the requirements set forth by the federal government.

Dr. Bob England is the director of the Maricopa County Department of Public Health. He said implementing those changes was intended to better educate clients. But this created job vacancies and those vacancies led to a gap in the number of clients served.

“And that gap coincided with when they were watching for how many clients we serve and so we took a bigger than expected hit this coming year," England said.

That hit was $1.24 million. England said it’s nearly impossible to meet their targets each year by operating within the government’s parameters. So, WIC has been in a downward spiral for about 5 years. But, there are possible solutions.

“Entities could decide to put some local resources into it,” England said. “But I don’t think that will happen here just based on history.”

If that doesn’t happen, WIC will continue to look for other ways to supplement its budget or risk closing more clinics. For now, WIC is co-locating with partner agencies to cut down on rent costs and switching to electronic cards instead of printing checks.

That will allow the agency to focus on serving pregnant, postpartum and breastfeeding mothers, their infants, and children up to 5 years old who are at nutritional risk and at or below 185 percent of the federal poverty level.

(Photo by Tiara Vian - KJZZ)
A classroom at the Avondale WIC office.

For Miranda Denson, traveling to another clinic after Oct. 1 isn’t ideal. But knowing that her daughter can receive care until she’s 5 years old, she wants to use WIC resources for as long as she can.

“I thought that WIC is just for pregnant people at first, but I didn’t know it went to 5 years old. So that’s good to know. I will definitely keep it around," said Denson.

England said WIC is more than just a nutrition program.

“It is valuable. This is not a program that’s, ‘Oh well, this is just fluff, you know, if it goes away, it goes away.’ It’s not like that," he said. "Getting a new life off to a healthy start makes a huge amount of difference down the road. It saves us all a ton of resources down the road if in early childhood a child grows up healthier. It’s a big deal.”