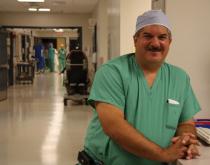 A doctor known for his work with burn and  trauma victims here in the Valley, and around the country, has died from cancer related complications.

Dr. Daniel Caruso was recognized as the driving force behind the internationally recognized Arizona Burn Center, based at Maricopa Medical Center.

Caruso first arrived at Maricopa Medical in 1992, where he completed his residency and internship. After a fellowship in California, he returned to Maricopa Integrated Health Systems, MIHS, in 1998.

In 1999 Dr. Caruso and the trauma team saved the life of Tempe police officer John Schaper who had been severely wounded. Two years later Phoenix police officer Jason Schechterle suffered extreme burns over most of his body when his patrol car was struck by another car and blew up.

Both officers credited Caruso and the hospital staff with their survival.

Caruso served as Chairman of the Department of Surgery at MIHS.

Caruso was honored by  the officers he treated with a customized badge that read “Cop Doc.”