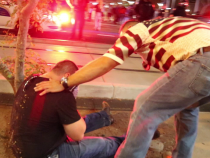 Phoenix was in the center of the national spotlight Tuesday night as President Donald Trump rallied his supporters at the Phoenix Convention Center and thousands of protesters gathered outside, voicing their opposition to Trump and his agenda.

That mostly-peaceful protest turned violent at the end of the night as police fired flash grenades and threw pepper balls to disperse the crowd.

Inside the convention center, President Trump was in campaign mode, rallying his crowd of supporters around some of his staple issues — building a border wall, repealing Obamacare and going after Arizona’s two sitting senators.

KJZZ reporters Mariana Dale, who was inside with the crowd, and Casey Kuhn, who was outside amidst the thousands of protesters, described what it was like on the ground at the rally.