Police fired pepper balls at 9:22 p.m. to disperse crowds from the street at 1st and Monroe. pic.twitter.com/jOfMEKIpYw 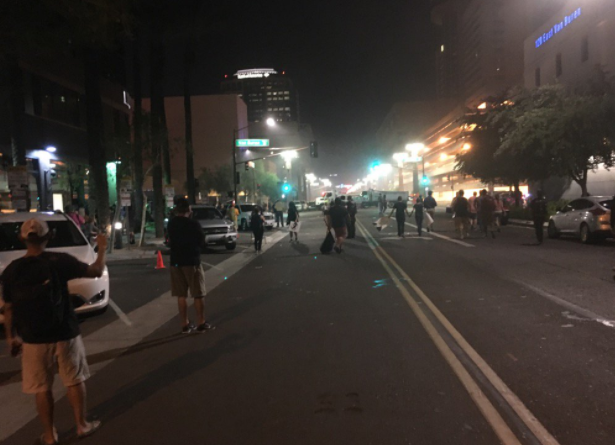 "People in the crowd have begun throwing rocks and bottles at police. They also dispersed some gas in the area. Police have responded with pepper balls and oc spray in an attempt to disperse the crowd and stop the assaults. Please encourage your audiences to leave the area."

Phoenix police have deployed gas outside the Phoenix Convention Center. The crowd disperses. 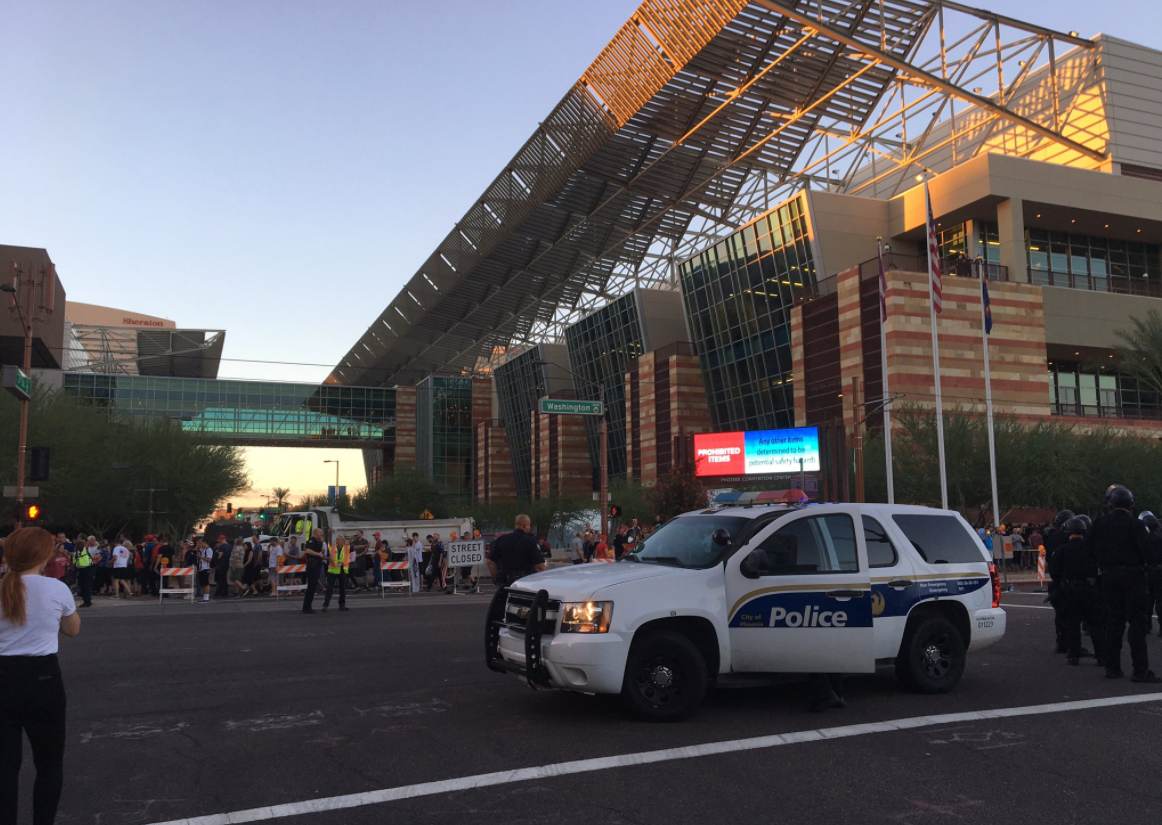 Thousands of people packed Monroe Street around the Phoenix Convention Center. They protested and shouted for hours as those lining up to see President Donald Trump filed in.

"Trump’s presidency horrifies me and I know it’s just a symptom of things in this country and I just can’t stand by and not do anything anymore," said Rachel Goluvovich.

The crowd bore signs and musical instruments and packed against the police barricades. Eric Cardenas, 23, expressed concern about what he sees as President Trump giving credence to racists.

Police reported Tuesday evening that there were no reports of violence among the protesters. 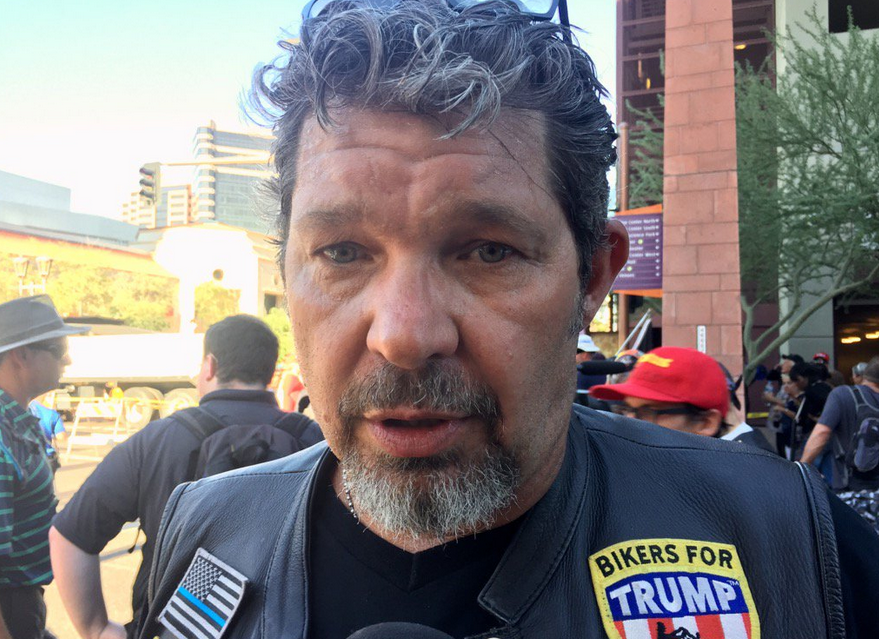 (Photo by Matthew Casey - KJZZ)
A member of Bikers for Trump.

A motorcycle group said they have hundreds of members in downtown Phoenix for the Trump rally. Bikers For Trump say they’re ready to jump on the bandwagon if the president endorses Kelli Ward for Senate.

Bikers for Trump call themselves an experiment that has turned motorcyclists into a political demographic. The group focuses on three main issues: so-called radical Islam, immigration and veterans affairs.

Founder Chris Cox said his bikers won’t engage protesters. And are here to lead by example.

"And through that example you have a better chance of bringing someone over to your frame of mind. But by shouting and screaming and raising Cain. That’s not a channel of communication," said Cox.

Cox said his bikers will escort any Trump supporter worried about their safety to their car. He said the group will be at all Trump rallies going forward. 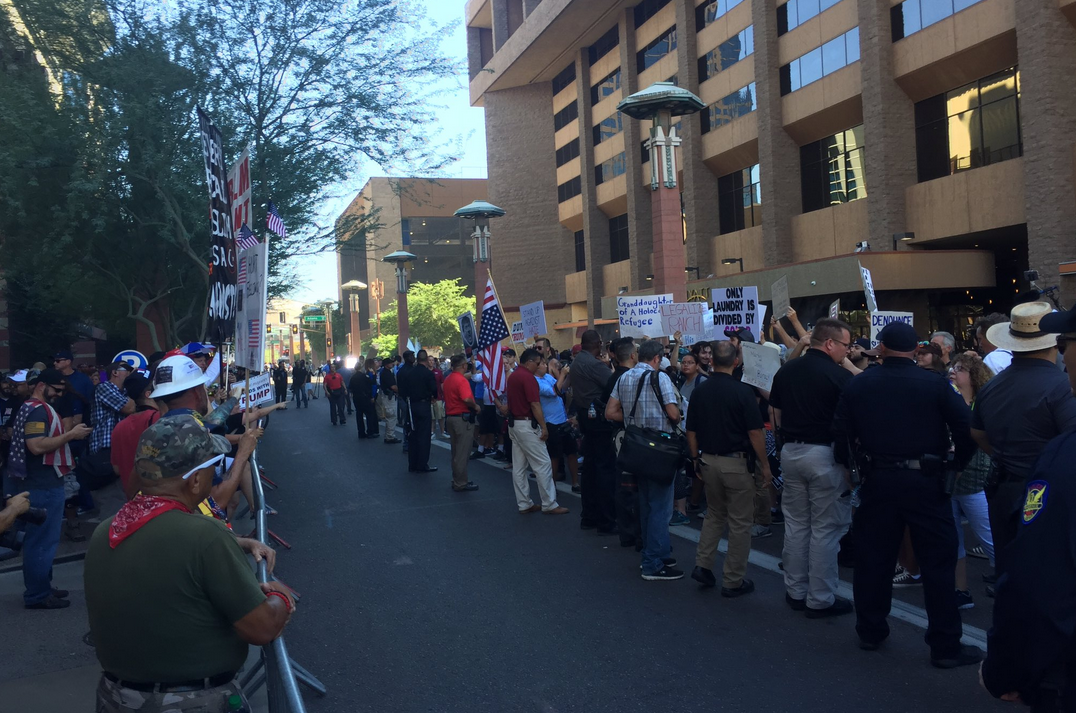 (Photo by Matthew Casey - KJZZ)
People line up outside the Phoenix Convention Center.

Lori Davis from Yuma  was one of dozens in the concession line.

"I came to support my president. It doesn’t matter who the president is, we should support him. Even if you disagree with him you should do it in a sensible way and use your words not bricks or stick," said Davis.

The majority of the crowd wore hats, shirts and carried signs emblazoned with the president’s campaign slogans like "Make America Great Again." 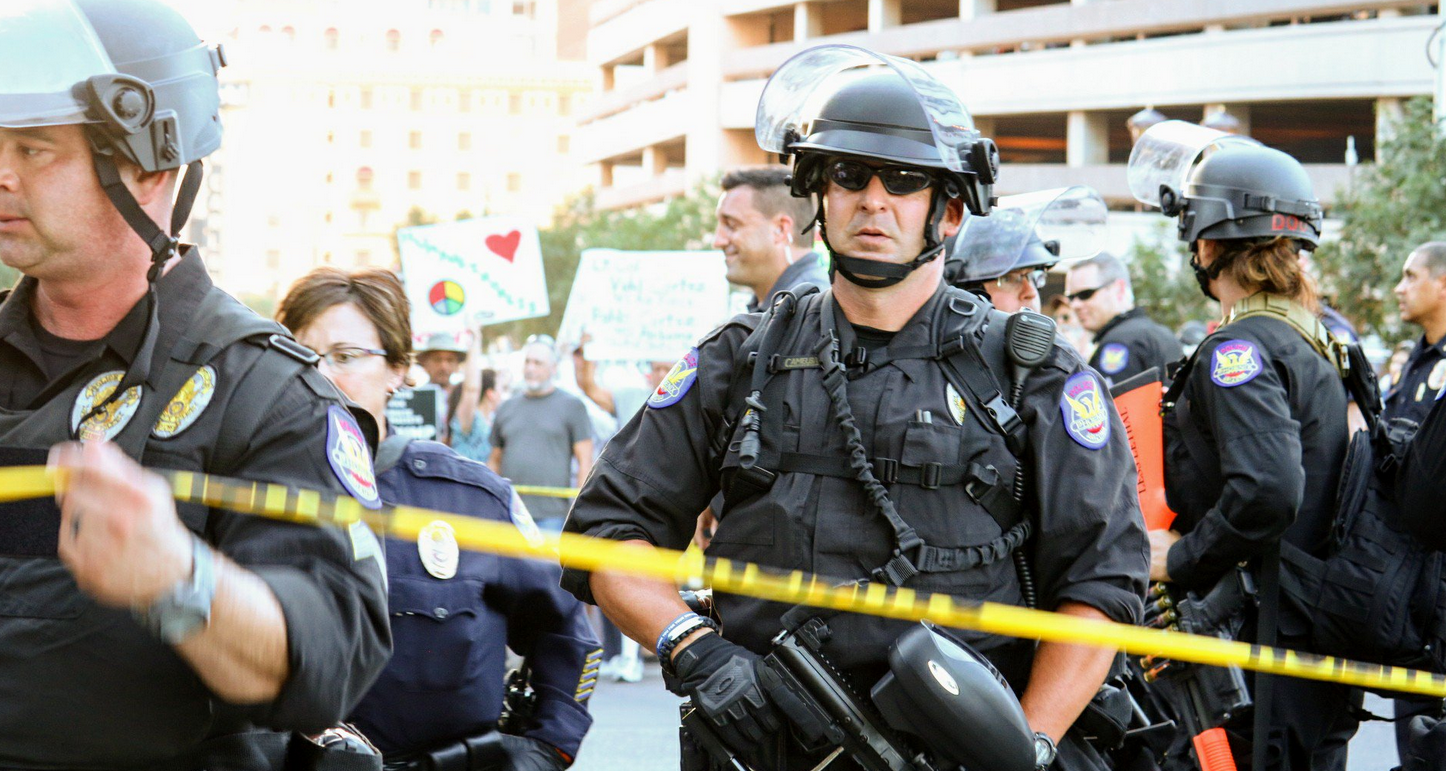 Arizona Democratic Congressman Raul Grijalva, a critic of President Trump’s, protested with others outside the Phoenix Convention Center.

“Coming here, teasing about Arpaio, now he says he’s not going to pardon him, I think it all culminated and made the division in this country worse worse that it is," said Grijalva.

The president told Fox News recently that he was considering pardoning former Maricopa County Sheriff Joe Arpaio for violating a judge’s orders to stop racially profiling. The White House announced late Tuesday that Trump does not plan on pardoning Arpaio at Tuesday's rally. 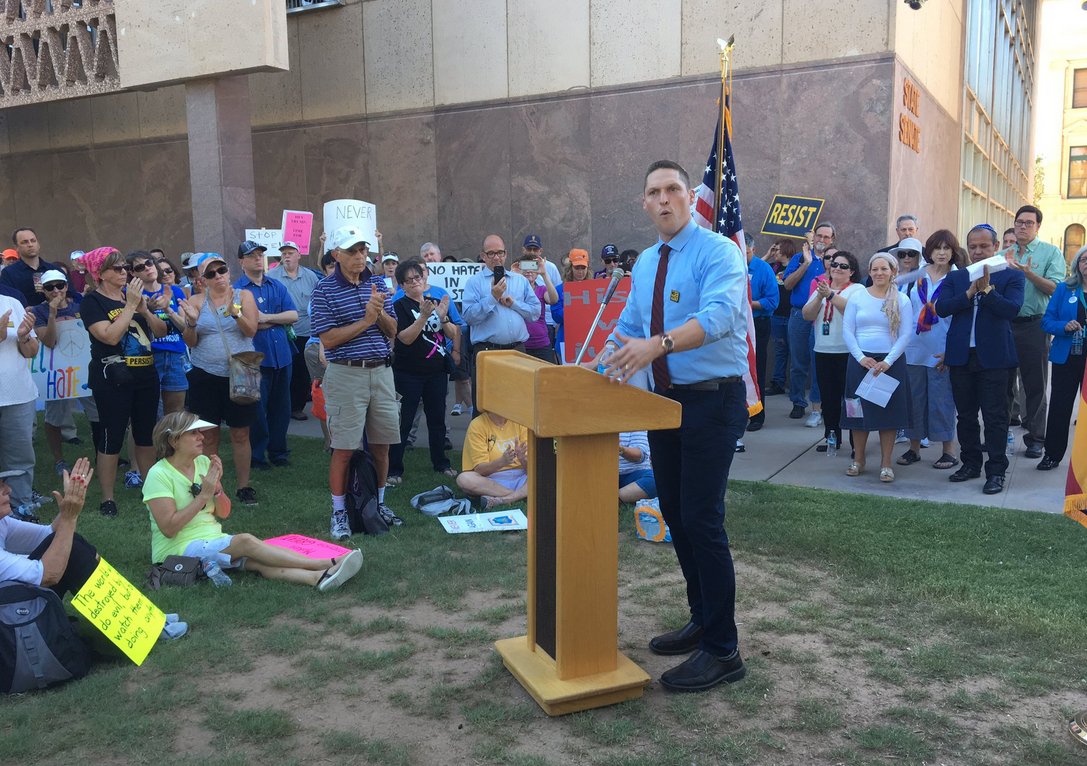 Arizona rabbis and Jewish leaders came together at the Arizona State Capitol lawn with signs and a podium to speak out against what they say is a rise in anti-semitism and neo-Nazis.

“All of us are to do that teshuvah, that repentance, to stand up when it may not be comfortable," said Yanklowitz. "We call upon the president to do teshuvah. We call on repentance from the president.”

Scottsdale local Seth Rich said this is his first political rally. He holds a sign with the words “never forget” and a yellow star of David marked "Jude."

“It’s a horrible atrocity that happened in our history of the world. And to see that it’s coming again is just crazy," Rich said. "And that’s why I’m standing up. And I won’t be silent.”

The rally marched towards downtown to join the hundreds of protesters at the Trump rally.