Forest Service Seeks Input On Future Of The Arizona Trail 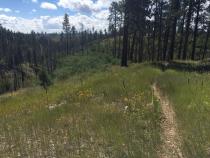 The U.S. Forest Service is looking for input on a long-distance trail that runs through the rugged center of the state. The Arizona Trail spans 800 miles, from Mexico to Utah.

The Arizona Trail was completed in 2011, and now the forest service is creating a comprehensive plan for its future.

Arizona Trail executive director Matthew Nelson said the plan will help protect the trail from development by giving guidance to the various agencies that control the land the trail winds through. He said the trail was dreamed up by a Flagstaff teacher decades ago – and finally completed in 2011.

“It wasn’t a state or a federal project,” Nelson said. “And so, because it was really built and maintained by the citizens of Arizona, it’s incredibly important that we, as volunteers and trail users really help kind of guide the federal agency.”

He added that one of the beautiful things about the Arizona Trail is its solitude.

“When the trail was designed, the goal was to provide these wild Arizona experiences in parts of the state people might not visit otherwise,” Nelson said. “To keep it really far away from cities and even small communities.”

The forest service is taking input until October on a preliminary draft of the plan, called a public scoping document. A first draft is expected by the winter of 2018.