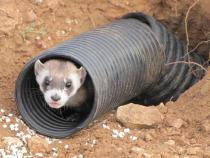 (Photo by Steve Shadley - KJZZ)
A black-footed ferret released in the wild north of Williams, AZ. Wildlife officials put a plastic pipe at the top of the burrow to encourage the ferret to go underground. The ferrets are raised with the pipes at a zoo and consider the tube to be safe. 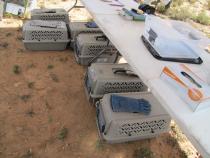 (Photo by Steve Shadley - KJZZ)
Black-Footed Ferrets rest inside plastic pet carriers awaiting their release in the wild at a ranch owned by the Babbitt family outside of Williams, Ariz. 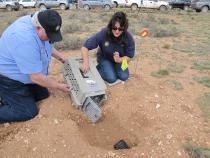 (Photo by Steve Shadley - KJZZ)
Pat Madden and Jennifer Cordova with Arizona Game and Fish release a Black-Footed Ferret into a burrow dug by a prairie dog. 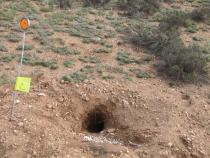 (Photo by Steve Shadley - KJZZ)
A reflector and yellow flag mark the burrow where one of the black-footed ferrets was released in northern Arizona. It will help scientists find the animals for periodic check ups on their well-being.

Black-footed ferrets are making a comeback in Arizona. Long on the endangered species list, the animals are now breeding well in captivity. So now, scientists say, it's time to see if they can continue their success in the wild.

A crowd of well-wishers gathered to see these small, furry critters run back into a remote expanse of a sage brush outside of Williams in northern Arizona. Willimas is not too far from the Grand Canyon. These 25 black-footed ferrets, who were raised in a zoo, will call this place their new home.

“It’s very important to return these animals to the wild because it would be terrible to have a species go extinct on our watch,” said Julie Lyke, a ferret expert with the U.S. Fish and Wildlife Service. It’s working with Arizona Game and Fish to bring the ferret numbers back up to where they were before the settlers came to this part of the state more than a century ago.

Jennifer Cordova is a wildlife specialist with Arizona Game and Fish on the black-footed ferret project. She said ranchers encroached on the ferret territory and the animals were nearly wiped out. In fact, a few decades ago, scientists thought the black-footed ferret was extinct in the western United States, Mexico and Canada. But 18 of the animals were found in the wilderness in Wyoming. They were captured and now ferrets are being bred at the Phoenix zoo and other wildlife sanctuaries across the country.

“Of those 18, they believe seven or eight were able to breed and contribute," said Cordova. "So of maybe 500 ferrets that we have today came from 18 animals."

Cordova stands on a dirty berm where the ferrets will be released on a ranch owned by Arizona’s well-known Babbitt family. She said it’s a strategic location because another animal important to survival of ferrets, the prairie dog, thrives in this area.

“They can’t have anything too sandy or too rocky because they need to dig their burrows without having them collapsing on them,” Cordova said.

"Prairie dogs make up 90 percent of the ferrets’ diet," Cordova said. "The ferrets actually live in prairie dog burrows and give birth in their burrows. So, they’re basically very dependent on prairie dogs.”

We walked over to a prairie dog burrow where Cordova and Arizona Game and Fish Commissioner Pat Madden will release a ferret. It’s in plastic pet carrier and when the cage door is opened, the noisy ferret refuses to come out.

They shake the cage trying to get the ferret to budge, but it’s a standoff. Ten minutes pass and finally the ferret goes into the hole. Steve Spangle with the U.S. Fish and Wildlife Service understands why the ferret isn’t too excited about his new surroundings.

“There’s a lot of people around and they’ve never been in a wild prairie dog burrow. So, they are just kind of reluctant, like you or I would be, to go into somewhere dark when we don’t know what’s down there,” Spangle said.

These ferrets had to be trained to kill for their food because in the zoo they were fed frozen prairie dogs, just like TV dinners.

Each ferret had a tiny computer chip injected under its skin so they can be scanned to be identified. Wildlife officials will eventually come back to find out how they’re doing.

Voyles said more ferrets will be released around here over the next few years. The goal is to get them to multiply and live a happy life in the wild on the Coconino Plateau.