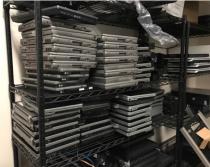 (Screen capture from Maricopa County Board of Supervisors agenda)
MCESA has 90 laptops, 15 desktops, 40 monitors and 350 tablets it plans to donate.

When a Maricopa County agency is done with supplies like computers or furniture, they are sold to the highest bidder. If nobody bites, the surplus is disposed of at a cost to the county.

The Maricopa County Education Services Agency, or MCESA, would rather see its surplus go to Arizona school teachers

“We’re just trying to get as much technology and as much resources we can into their hands, so they can use it in the most creative ways,” County School Superintendent Steve Watson said.

MCESA has asked the County Board of Supervisors to exempt the agency from the surplus policy through December 2018. The intent is to streamline the donation process by avoiding a vote every time the agency wants to donate supplies.

MCESA spokeswoman Laurie King recalls at least three donations in recent memory. Right now, MCESA has 90 laptops, 15 desktop computers, 40 monitors and 350 tablets it plans to give to schools. The agency intends to distribute the items to teachers and school district staff through social media.

Watson, who was previously a teacher in the Deer Valley Unified School District, remembers long waiting lists to use a limited number of school computers.

“If I had just 15 tablets where I could pair up my students to do an activity or to research something online, that would make a huge difference in how I think about planning activities for the kids,” Watson said.

The Board of Supervisors is scheduled to vote on the issue at its Wednesday morning meeting.