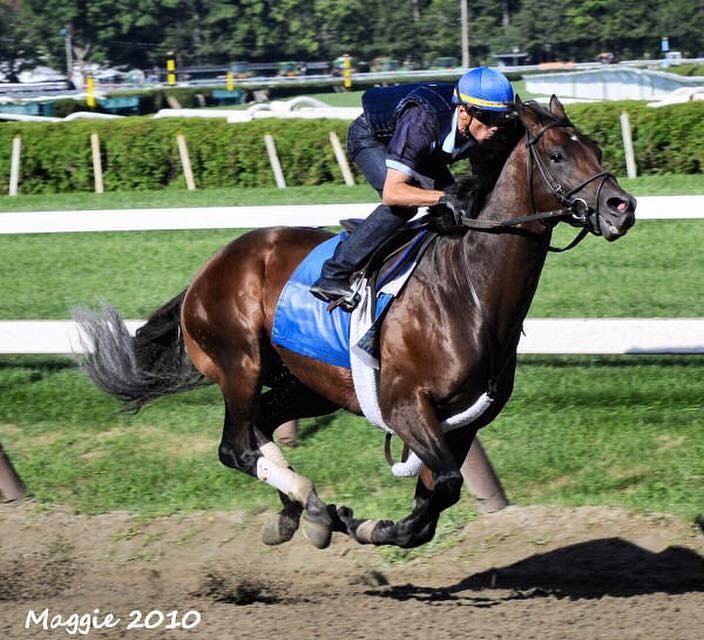 (Photo courtesy of Maggie Kimmitt Photography)
Garrett breezes Blame at Saratoga in 2010. The pair beat mare Zenyatta in her only career loss.

Just a day after getting his teeth knocked out in December 2008, Garrett Gomez was back on the racetrack and won two races.

In 2010, Gomez rode Blame to victory over the then-untouchable mare Zenyatta with two hairline fractures in the Breeder’s Cup Classic.

Time and time again Garrett Gomez pushed through physical pain and walked into the winner's circle.

“If you’re gonna get hurt, get back,” his dad Louie Gomez would tell him. “Don’t even think about it. I said block it. Think of all the good things you’ve done. Think of all the people that are watching you because they still have a lot of respect over your riding.”

The Tucson native started riding professionally at 16 years old and went on to win 3,769 races and purse earnings of more than $205 million.

Friday, he will receive horse racing’s highest honor, an induction into the sport’s Hall of Fame.

But Gomez won’t be there to accept the award.

“One side of my heart is happy and one side is sad and the sad part is because he’s not physically there with us,” said close friend Damien Scott.

“We all have our faults, but Garrett had a heart of gold.” 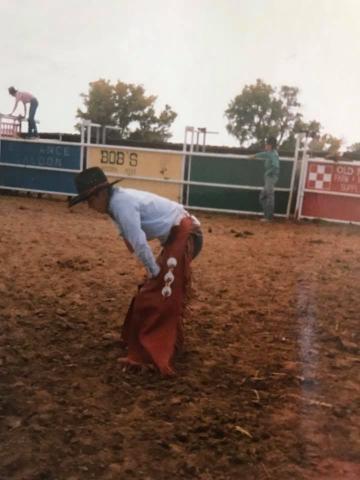 (Photo courtesy of Kimberly Davidson)
A teenage Garrett tried to catch his breath after a wild ride on a bull. As his Dad remembers he was flung from the back of one bull only to accidentally land on another on the far side of the fence.

In an old photo, a teenage Garrett wears burnt orange chaps and a black cowboy hat. Like many family photos, it’s blurry and a little off kilter, but his Dad remembers the context.

What’s missing from the frame is the bull that threw him.

“He was trying to get his breath. I had to take a picture of it,” Gomez said laughing.

Before Garrett became one of racings’ winningest riders, he was on the high school rodeo team and before that, struggling to stay on the back of a family friend’s pony. Louie Gomez, a former jockey, remembers his exasperation as the pony threw him off again and again.

“He says how many jocks would get back on a horse that knocks the ___ out of them,” Gomez said, pausing in lieu of an expletive. “He tried to kick the pony in the belly and he fell on his can, but he got back on him later on.”

Garrett Gomez used to tell people he was the youngest jockey to mount a horse in the winner's circle after his dad lifted his infant son into his lap after a successful race.

His dad Louie Gomez smiles when he recalled the “diaper jockey.” Years later he would be his son's first teacher.

“There’s a lot more to it than people really realize when you’re sitting on their back.”

He rattles off what might be in a jockey’s mind as he blazes down the track: the gate of your horse, the horses around you, the jockeys, their preferences for position, openings in the herd of fast-moving animals.

Garrett Gomez grew up in the jock’s room, pulling pranks, like filling his dad’s pants with shaving cream.

When Gomez turned 16, he dropped out of high school and started racing professionally. He made a name for himself at tracks in New Mexico, Arkansas, Illinois and later California.

Fellow jockey Mike Smith called Gomez a “heady” rider. Even if he wasn’t on the best horse, you were worried if he was in your race.

“When he was riding and on top of the game there were not too many people better than him, if at all,” Smith, a Hall of Fame jockey, said.

On the track, he was called Go Go. It was on the yellow elastics that held on his helmet cover.

“He just made everybody laugh and made you like him and on top of that he was really talented,” jockey Corey Lanerie said. “He had everything any jockey would want.”

Being one of the best in riding doesn’t mean you never lost a race.

“If you’re winning at a 20 percent clip, you’re doing really good, so that puts you losing at 80 percent,” Lanerie said. “And people don’t realize that most of the blame is on us almost every time.”

The horse's owner, the trainers, the agents — their livelihood depends on the purse.

'Normal Was Messed Up'

Winning seemed to come easily to Garrett and so did drug and alcohol use.

In his biography, Garrett said, “Where I felt too high, I’d drink, and if I felt too drunk then I’d use. I found a way to keep myself feeling normal — but normal was messed up.”

He hid it from all but his closest family.

“When I worked for him the first time, I heard the rumors,” said Jim Pegram, Gomez’s agent in the late 90s.

Years of drug and alcohol use caught up with Garrett and he left the track in 2002. He spent 40 days in jail and went to rehab the next year.

“It happens more than you would like to think,” Pegram said.

There are no official numbers on the number of jockeys who battle addiction. The Winners Foundation was established in 1984 to counsel people in the California racing industry who are facing addiction or behavioral health problems.

“We walk the track. We walk the frontside, we walk the backside. We’re visible, we always just let people know that we’re always around even if you just want to talk,” said executive director Darin Scharer. “Everything is always kept in confidence.”

Scharer, who’s spent decades in counseling, said sometimes all they can do is plant a seed.

“Success is always based upon a person’s willingness and desire to make changes,” Scharer said.

After rehab, Gomez had to earn back his jockey’s license and the trust of the industry, including his agent Jim Pegram.

“Soon as I heard that, I went to him and I told him Garrett, I’d like to go to work for you. I know we can do good,” Pegram said.

The two went on to win dozens of races, including Garrett’s first two Breeders' Cup races.

“Garrett was more of a sit still rider and then he’d come running late,” Pegram said. “The horses really ran for him and he had great judgement.”

'Get On A Winner'

Gomez’s dad watched every one of Garrett’s races, piped by satellite television into his home. He knew winning insulated his son from injury, both emotional and physical.

“You get on a winner and it kind of like blocks all that bad stuff away,” Gomez said. “It just makes you forget any type of pain.” 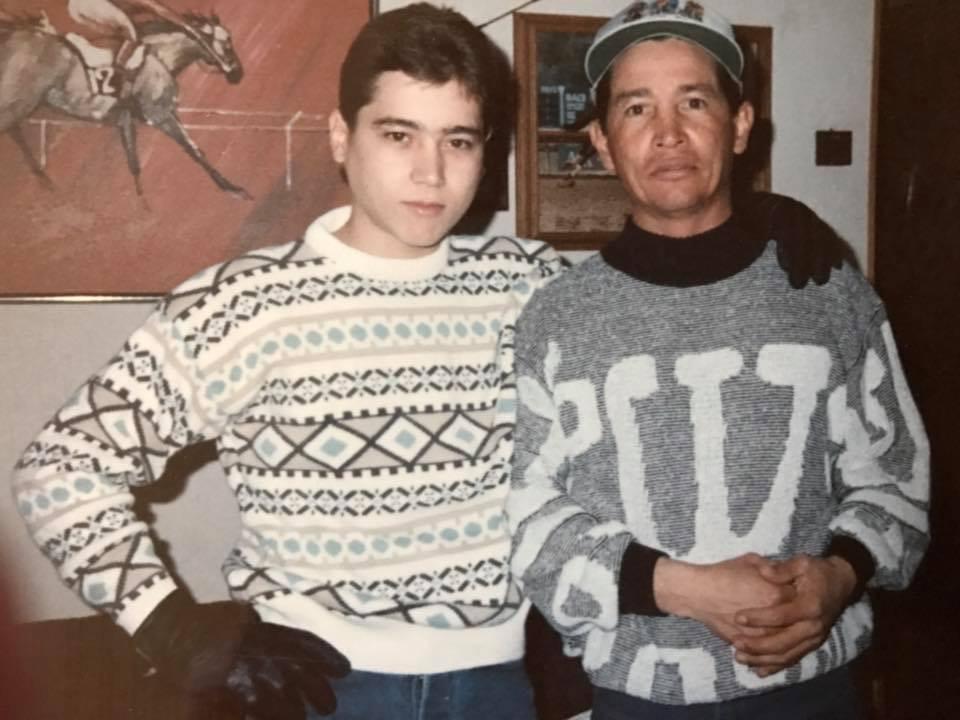 (Photo courtesy of Kimberly Davidson)
Garrett and his dad Louie Gomez sporting “ugly Christmas sweaters,” as his dad called them.

Louie thinks this is part of why Garrett chose racing over rodeo. He was the one leading his mounts to the victor. In rodeo, Gomez was at the mercy of the bulls.

“The horses he felt he had control. He never liked something else having control on what’s going to happen to him.”

Garrett retired from racing in 2013 in the wake of shattered heel.

Smith said he saw Gomez in the fall of 2016 and had a hunch he would soon come back to riding.

“What surprises me is what happened, happened at the end of everything,” Smith said.

His dad said he grew frustrated in the idleness. His pending divorce compounded the stress and Garrett returned to his Tucson hometown.

“He was starting to get cleaned up and he wanted to go back to riding and that’s when things started to get turned around on him and everything.”

Garrett was found dead in a casino hotel outside of Tucson. The medical examiner's report points to methamphetamine and an enlarged heart as probable causes.

“I feel like there’s something I could have done.”

The Hall Of Fame

His father, his family, friends and fans mourned Go Go’s death, but they can still celebrate his life and career.

Smith, who’s still racing today, has a pair of Garrett’s boots, a gift upon his retirement.

“Anytime I ride a big race, I use his,” Smith said.

He wore them to victory at the Dubai World Cup in March.

That's a race Gomez once won. When he retired, he was the 12th highest earning rider in the sport and lead in earnings four consecutive years. He won the Eclipse Award for Outstanding Jockey two years in a row.

"I came from a little bitty place and to be able to achieve as much as I have achieved and some of my goals is a wonderful thing," Gomez said at Santa Anita Park as he accepted the George Woolf Memorial Jockey Award.

Gomez had been up for the Hall of Fame before, but the award eluded him.

Spokesman Brien Bouyea said each voter, who has a background in racing journalism and commentary, must decide who they think has earned the honor.

“At the museum and the Hall of Fame we’re not here to pass judgement on anybody so if he was elected to be in the Hall of Fame, we view him as being rightfully there just like all the others,” Bouyea said.

Louie Gomez will accept the award at the Hall of Fame in Saratoga, New York. Though the day will be bittersweet, he can’t wait to tell the crowd about the “diaper jockey” riding into the winner’s circle before he could walk.