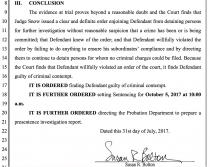 The conclusion of a ruling from a federal judge finding former Sheriff Arpaio guilty of criminal contempt.

Arpaio faced charges after prolonging his immigration patrols for 17 months after a judge had ordered them stopped in a racial profiling case. In a ruling released Monday, U.S. District Court Judge Susan Bolton found Arpaio willfully disobeyed a federal court order to stop arresting people on suspicion of immigration violations.

Arpaio had already been found guilty of civil contempt after it was found his deputies continued the practice for a year and half after the order.

But his attorneys argued that the violations were a result of poor communication and a lack of understanding by Arpaio and his command staff. Throughout the court proceedings, Arpaio acknowledged prolonging the patrols but said his defiance wasn’t intentional.

Arpaio’s lawyers have long maintained the trial should be heard by a jury. The defense said Arpaio should be judged by his peers instead of the same federal court system that recommended he be tried for criminal contempt.

Attorney Jack Wilenchik says the very nature of the case meant his client would not get a fair verdict.

Arpaio’s attorneys argue that unlike a judge, a jury would not find that the original order was clear - a basis for the contempt charge.

The defense says they will argue at the sentencing hearing on Oct. 5 that Arpaio should not get any jail time. Wilenchik said attorneys will also be asking for a stay so they can appeal the conviction.

Attorneys for the state said Arpaio was aware of the order to stop immigration patrols and continued to defy it for political gain.

In her ruling, Judge Susan Bolton agreed, saying the evidence showed a “flagrant disregard” for the order.

The former sheriff will be sentenced Oct. 5 — Arpaio is facing up to six months in jail.

“My immediate reaction is I think it’s going to be a powerful story in the state of Arizona about the community standing up to the abuse of power,” said Petra Falcon, the executive director of Promise Arizona, an immigrant advocacy organization.

“It’s justice for all those families that lived under that terror,” Falcon said.

In a statement released Monday afternoon, the Maricopa County Sheriff's Office said, “The verdict today by U.S. District Court Judge Susan Bolton is a conclusion to the disservice and distractions caused by former Sheriff Joe Arpaio.”

Emily Lopez, 17,  spent half of her junior year of high school getting out the vote against with the Adios Arpaio campaign.

She’s considered herself an activist since her very first protest at the state Capitol seven years ago.

“I feel like I have a long history with Sheriff Joe since I was 10 years old, he doesn’t see it but I do,” Lopez said.

She wanted to speak up for people like her mom, who’s undocumented, and her dad, who was deported before she was born.

“I never liked the word hate, but he gave me a reason to hate because he did tear a lot of families apart and it scared a lot of us.”

When she heard the news of Arpaio’s criminal contempt of court conviction she was happy, but also ready for the next fight, the 2018 midterm elections.