(Photo by Andrew Bernier - KJZZ)
Soil samples are mixed with reagents to detect nutrients and contaminants. 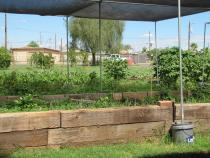 The sight of empty lots being replaced by gardens is becoming a common one in the Valley. As cooler weather brings out new gardeners, its probably a good idea to check out what’s in your soil before you start.

Last winter I scraped some dirt from the open lot in front of my house in central Phoenix, hoping to start a garden. There used to be a house there, torn down years ago. As I was scraping, I found nails, glass and even a bullet, and that is what I could see.

So I was curious. What was I not seeing?

I asked my landlord about the history of the land, and aside from the house that was torn down, he knew very little. So I scooped up some mixed samples of my soil and brought it over to Motzz Laboratory.

We sift out rocks to prep the soil for chemical testing, which is then mixed with reagents, or substances that start a chemical reaction. Those reactions reveal the amount of nutrients in the soil and detect for contaminants, like heavy metals lead and arsenic, or possible solvents and oils. The results will be available the next day.

“We had more homeowners having their soil tested because organic produce is expensive, so they want to grow their own food," Sedang said. "So we got a lot of homeowners at that time.”

According to the National Gardening Association, there has been a 17 percent increase in households gardening from 2008 to 2013, meaning 35 percent of the country is growing some of their own food.

So how about here in the Valley?

“How many people are actually just growing food in their front and back yard? There’s well in excess of 10,000 families growing, probably a lot more,” said Greg Peterson, founder of “The Urban Farm” in Phoenix and a vocal supporter of local and sustainable food production.

What’s the difference between a gardener and an urban farmer?

In fact, farming once ruled the Valley. I visited farmer Ken Singh who was transforming an old golf course into a new garden.

“This town used to be a farm community," Singh said. "See they built all on farmland. Look at Glendale. Look at from here to Riggs Road. It’s all houses. It used to be gorgeous farm.”

But decades of urban development has changed the soil. It now needs to be cleaned with nutrients and organic life restored through a process known as bioremediation. This is done by adding compost rich with little living things like bugs and fungi, collectively called microbes.

“Microbes can bioremediate most toxins and pollutants. They’ll take everything down and break it into fractions. And this is a cross-section of what microbes should be in healthy compost,” Singh said.

He plunks a bunch of compost into my hand.

“See them in there?" Singh asks. "There’s the hypha fungi. That’s the microbes forming. These are the guys that do all the work.”

With added mulch and dark color, the compost has the space and moisture to retain nutrients. This helps dry soil, which by itself contains a high concentration of natural salts and minerals, leaving a high moisture pH and low microbial activity. Along with bioremediating soil through compost, Singh also stresses how time helps restore the health of soil.

“If you’re growing for your family what you want is clean land, so if you don’t know, do a test," Singh said. "So, just see what's in there, and if it’s not bad, don’t worry. And if you use proper organics, in one to three years it’s getting better. And three to four years, man, you’re feeding your family.”

Back at Motzz Laboratory, the results of my soil tests were back in.

“For your heavy metals, the only thing I would be concerned about is your arsenic," Sedang said. "But it exists naturally.”

The arsenic still fell below acceptable legal levels. So not only was my soil not contaminated, it was much healthier than I thought. In fact if I put any more nutrients on it, it would hinder plant growth. I had to ask one more question: would she eat food grown in this soil?

“I would," Sedang said. "It’s healthy and it’s going to grow and have some nutrients. There is nothing there that's detrimental that I see.”

Even with an agricultural and industrial past, the University of Arizona’s Agricultural Extension reports that contamination in Valley soil is minimal. So with a little care from bioremediation and compost, the Valley it is still in pretty good shape for budding urban gardeners.